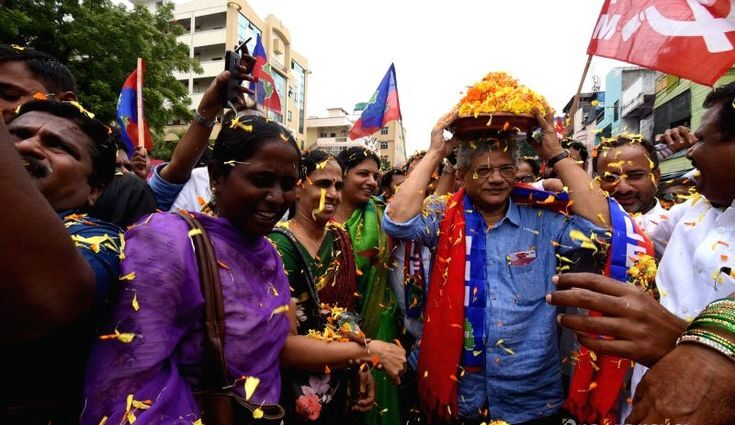 Atheists communists believing religion to be the opium of masses are now turning to divine intervention to resurrect their dead electoral fortunes in India.

A news report by the Hindu dated 25.03.2022, stated that the CPI(M) in a marked ideological shift, plans to actively participate in Temple festivals.

The CPI(M) Tamil Nadu State Secretary, K Balakrishnan in Madurai on Wednesday reportedly said that they are adopting a new strategy “to counter the dominance of Sangh parivar in temples and festivals”.

Mr. Balakrishnan seems to be peeved that the RSS and Bharatiya Janata Party were taking up a lead role in Temple festivals and putting up their saffron flags in the events helping them connect with Hindus emotionally, paying them rich dividends electorally. It has now dawned on Balakrishnan for a need to not just fight the BJP-RSS ideologically but also combat them culturally.

Interestingly, the CPI(M) is slated to discuss their new strategy in its 23 rd State conference to be held in Madurai on March 30, 31 and April 1st.

The communist party seems to have taken to this route of adopting Hindu religious cultural appropriation to reach out to the people after it finds itself nearly dead with hardly 0.01% vote share in the recently concluded Assembly elections in Uttar Pradesh, Punjab, Goa, Uttarakhand and Manipur. If not for piggybacking  with the DMK, it is as good as a fossil in Tamil Nadu too.

The communists seems to have realised that the party’s policy of anti-Hindu atheism  while appeasing  Jhadi Islamists and rabid Christian evangelists has rendered itself a less than marginal and virtually non-existent party electorally due to its disconnect with the Hindu society at large.

Pertinently the party seems to be eating the crow after espousing rank hatred for Hinduism and Hindu deities for ages. The party seems to have slowly woken up to Subhas Chakraborty’s way after castigating him in 2006.

In 2006, Subhas Chakraborty, the then West Bengal state Industries Minister in the Left government, was ‘caught’ on camera worshipping Kali at Tarapith. He also famously identified himself as a Hindu, a Brahmin and a Marxist – in that order of preference. Not just this, in his lavish praise for Jyoti Basu, he called Basu a “modern day Shri Krishna”. Subhas had to the consternation of his red party colleagues, even suggested that they give up the ‘Lal Salam’ salutation and adopt ‘Namaskar’ instead! Senior BJP leader, Thathagatha Roy had then welcomed Subhas Chakraborty to join the BJP since he had jettisoned Marxist ideology.

Enraged, Jyoti Basu then issued a statement saying Subhas has lost his mental balance. Soon, Subhas was browbeaten by the CPI(M) to issue clarifications reiterating his commitment to Marxism and dialectical materialism while negating his Hindu and Brahmin identity. Subhas was forced to say that he never worshipped Ma Kali, but was compelled to offer flowers to the Devi as he could not throw away the flowers given to him at the Tarapith Kali Temple.

The CPI(M)’s Tanmoy Bhattacharya in 2017 kicked up a debate on conflict between political beliefs and personal faith when Tanmoy did a Subhas Chakraborty by “offering a red robe” to Kali Devi while inaugurating a puja pandal at Dum Dum North, Kolkata.

Notably, in the communist party’s hay days such public display of belief in Hindu deities and participation in Hindu religious rituals by a party member could hazard him/her unceremoniously being sacked from the party.

The communist party members are now being increasingly forced to make a show of going to Temples during festivals in Kerala, help organise Puja pandals and even perform pujas in West Bengal to connect with the larger Hindu community which is increasingly becoming sick of the skewed and twisted “secularism” practised by the so-called “secular” parties.

Not long ago, it was considered a very secular act to organise and attend Iftaar parties by all “secular” political parties and even host them at the expense of the state exchequer, while it was anathema for them to celebrate Ramanavami or Janmashtami or Mahashivaratri as they are ‘communal’ Hindu festivals.

Sensing that Hindus have started consolidating electorally by voting for the BJP against blatant jihadi appeasement and condoning of jihadi violence in aversion to secular politics, many of these “secular’” parties are forced to make some perfunctory changes for a makeover to remain relevant in Indian politics.

The raging box-office hit of Kashmir Files breaking all records giving a glimpse of the untold pain and horror of Hindu genocide in Kashmir in 1989-90 has unnerved all secular political parties which have consistently deliberately twisted and obfuscated the truth by appeasing jihadi forces.

So, it is not surprising that the CPI(M) in Tamil Nadu after seeing the encouraging electoral success of BJP in the recently held urban local body elections winning over 300 seats in all of Tamil Nadu and also wresting the West Mambalam Chennai Corporation seat by storming the anti-Hindu Dravidian political fortress, is now resorting to some optical Hinduism for electoral

The increasing consolidation of Hindus for assertion of Hindu rights  by overcoming caste fractures created by political and other Abrahamic forces inimical to Hinduism has resulted in secular parties making a beeline for Temple visits during election season.

Interestingly, top RSS leaders in the recent past are trying to break free from their Right Wing Hindu image in a bid to get a certificate of secularism. RSS second in command, Dattatreya Hosable even claimed, “I am from the RSS. We have never said in our discourse in the Sangh training camps that we are rightist. Many of our ideas are like leftist ideas.”

Few days back, senior RSS leader Arun Kumar tried to sound secular by claiming, “RSS extended help not only to Kashmiri Hindus but Muslims too, when they bore the brunt of terrorism in the Valley in 1990” as reported by the Daily Excelsior dated 25.03.2022. This statement is problematic as it echos the jihadi and leftist narrative denying religious genocide of Hindus in the Valley by Islamic jihadis in 1990 and attests the jihadi story  that Muslims were greater victims of terror than Hindus in Kashmir.

Going by the trend of growing Hindu assertion, we can safely foresee in near future the CPI(M) dumping its dubious anarchist perpetual class war ideology borrowed lock stock and barrel from the west.  The communists may very well prefer Jai Shri Ram or Jai Mahakali over ‘Lal Salam’ and perhaps start crooning “Sada Vatsale Matrubhumi” as their party anthem, while the RSS might adopt the “La Internationale” to appear secular!

52,865 total views In the din of the Supreme Court verdict upholding 10%