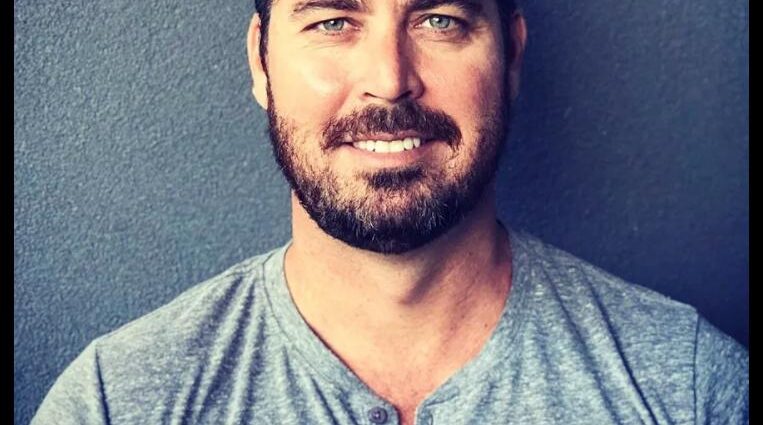 By: Lakhsminarayanan V
In: Media

Who is CJ Werleman?

This is what he calls himself in his website:

“CJ Werleman is a journalist, published author, political commentator, and activist who has dedicated his journalism career to exposing discrimination and injustices against Muslim communities around the world. Insights the mainstream media too often ignores.

He is a global correspondent for Byline Times, Columnist for Inside Arabia. In the past he had authored many articles for Salon and Alternet.

CJ Werleman is not a journalist. He is a thug who instigate communal violence by tweaking facts and Videos for his career. He is a fake news peddler, a person with no moral values, an unethical author whose work is nothing but plagiarism, habitual liar and hate monger who earns money through Sensationalism. By manipulating the facts and videos he creates fake incidences of violence against Muslims and instigates hatred between Muslim and non-Muslim community around the world through his fake news.

He is the mouthpiece of Al-Qaeda that unleashed Terror in US and responsible for Sep 11 Attack. He is also mouthpiece of ISIS and spreads communal disharmony in USA, Australia, Israel, Palestine, India, China, UAE, Saudi Arabia, and Syria. He fools his followers through fake news and videos and many Muslims around the world and Christians in India are falling prey to his hatred.

CJ Werleman who migrated to United States from Sydney, Australia calls himself as Journalist who exposes injustices against Muslim communities through the world. The surprising fact is that he has been a self-confessed Islamophobe in his early career. So, how did he become exposer of so-called atrocities on Muslims?

So here is the story:

He studied Journalism and English as his major. What do you do if you want to become a successful Journalist, but your career is a failure? Use Sensationalism tactics. In 2005, he witnessed the twin suicide bomb attacks on Bali’s Jimbaran Beach by ISIS. Exploiting this opportunity, he started his self-confessed Islamophobic rhetorics and started unleashing hatred against the Muslim community. He actively tweeted with abusive words on Muslims to gain popularity.

He wrote a book “God Hates you, hate him back” in Oct 2009 which is claimed as International Best Seller. This book is neither listed in any of the Best Seller listi in Internet nor there is any trusted information on how many copies are sold. His book in Amazon.com has got only 258 reviewsii and when we compare it with Chetan Bhagat’s Five point someone which was a best seller with Million copies sold, it got 1859 reviews and 1359 global ratings. How could a best seller have such low reviews and not listed in any best seller list. Not just this book, but all his books have very low reviews.

His other books include – Jesus lied, He was only Human

How do you write books and articles when you don’t have an in-depth understanding of the subject? CJ Werleman’s tactics is to select existing articles, copy and fill up with his hearsay information. His writings were found to be plagiarized and reported by several people, especially by Dr Peter Boghossian who cited his plagiarism from various authors like Fareed Zakaria, William Broyles, Jr Robert Pape, and Eduardo Porteriii

If you want to cover wide range of political issues across the globe from Israel vs Palestine to China’s Uighur Muslim issues to Indian Muslims, but you have no idea of the local regional politics, then create your own news through Fake Videos, twisting the facts and leverage isolated or irrelevant sensational issues and report it as Muslim oppression.

Traditionally, Journalist visit many places to interview local people to report the local issues, but he comments on other countries local issues sitting in US through his fake news and videos without any understanding of the local issues.

CJ Werleman’s books and articles are full of plagiarism. He cites no articles or publishers in his work and sometimes he does a blatant cut and copy from others text. Cited below are some of his plagiarism reported in Internet with courtesy to The Daily Banter iv 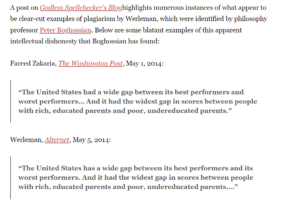 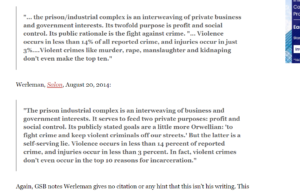 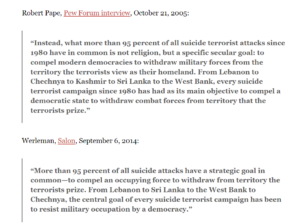 Kuran Curious is full of Plagiarism as checked in Grammarly

In 2014, Alternet regretted for publishing his articles that were taken directly from ‘other sources and presented as his own ideas. v 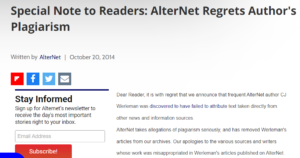 CJ Werleman became Muslim sympathizer from an Islamophobic. The reason that he provides is completely absurd. The story – CJ Werleman Keeps Changing His “From Islamophobe to Defender of Muslims”vi published in IsraellyCool. The reality is that he found Sensationalism an opportunity for his career. Since then, he has been indulged in spreading fake news to instigate Muslims against other communities.

One who had so much of hatred towards Muslim and Islam claims that after reading Quran he became defender of Muslims. Any sane person won’t buy-in this logic. This proves that he is an opportunistic person who shamelessly says that he defends a community against whom he had earlier spread hatred and this also proves that he goes to any extent to build his career.

One of the main objectives of Islamic Terrorist outfits like ISIS is that they want to convert every country into an Islamic state. While they could achieve this by taking over countries with Poor economic and defense like Afghanistan, they could not do much progress in the Western Countries and Developed countries like Singapore, China, and India.

So, their strategy is to work with various Islamic Organization in each country and influence them. Another strategy is paid Journalism to spread hatred in these countries to destabilize the economy and make them fragile. He is one such mouthpiece for ISIS to destabilize such countries.

His connection with Islamic terrorist outfits like ISIS and Al-Qaeda have been exposed in various media.

Below are some of the sites that exposed his controversial connections: – 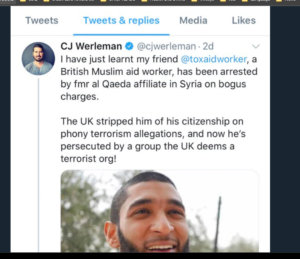 His strategy to earn money is by indulging such sensitive issues, creating fake news and videos to gain more audience. Citing his contribution to defending Muslims, he asks for donations in peanuts covering a large base of users. Minimize Profits and Maximize Sales is his strategy. He has setup various portals seeking for donation.

His strategy to gain attention through Sensationalism is to look for sensitive issues and collect facts and videos, tweak or morph and spread the hatred. He provides a communal angle especially involving Muslims to defend his fake objective of supporting Muslims.

He often makes absurd views that exposes his bias.

Below is the list of articles in Internet exposing his tactics of misrepresentation to spread hatred. Not to bore the readers, we are limiting to few of his fake news.

In nutshell he is a disgrace to Journalism and a threat to Humanity. He is a terrorist under disguise of a journalist, and it is time for international community to punish him for his contribution to Terrorism.

ii Review comments of CJ Werleman’s book vs other books

52,927 total views In the din of the Supreme Court verdict upholding 10%