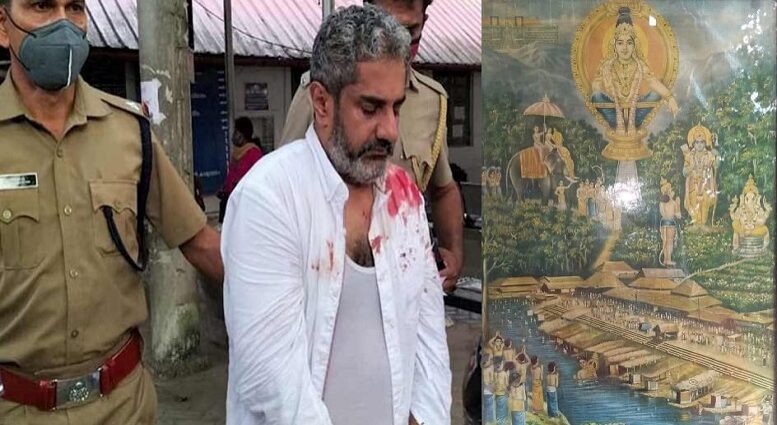 Karma. George Karimbanal shot dead his brother Ranju Kurian and uncle Mathew Scaria near Kanjirapally in Kerala. All three belonged to the Christian Karimbanal/ Karimpanal family that was involved in the 1950 arson and desecration of Sabarimala temple.

Sabarimala Temple, which has no surrounding habitation for an adjoining stretch of 30 km, was attacked on June 16, 1950. It was found in wrecks, the Ayyappa murti was severely damaged, and the storeroom was razed down due to fire. Possibility of accidental fire was ruled out.

K Keshava Menon, a Deputy Superintendent of Police who had investigated the original Sabarimala temple arson case, had noted that there were 15 cut marks on the door leading to the Sreekovil, with the Ayyappa murti’s head, left palm and fingers being severed.

Menon had concluded that this was a plotted conspiracy; a hate crime against the religious sentiments of the Ayyappa devotees. His conclusions were as follows:

“…Christians have got more familiarity and knowledge than the Hindus in this direction, as they and they alone occupy the places at the base of these hills and they are the only persons who hunt and poach in the vicinity of the temple day in and day out.”

Further investigations revealed that converted Syrian Christians/Roman Catholics were behind the attack. Christian converts had ruined several temples to dislodge the Hindu faith from the state and convert it into a breeding ground for foreign aided Christian missionaries.

‘Secular’ politicians had intervened and no action was initiated against the accused, including Karimbanal Kochukunhu Muthalali and four other main accused.

Though Kerala was shocked to hear about the shooting and murder of Kurian and Scaria, Hindus were not surprised as many believed that the Karimbanal family was cursed and living under the shadow of Bhagwan Ayyappa’s wrath.

Later generations of the other four accused have spent most of their lives in mental asylums and now this.

Abrahamic fanatics often mockingly ask why Hindu Gods are so late with their fury. Legend has it that a year for humans is equal to a day for the Gods. If a devastating flood occurs 100 years after the previous one, for Bhagwan Ayyappa it happened just 100 days later.

Image and material source for this post: Author- Parasuram, Published on 23.03.2022 in Karimbanal family members, whose ancestors allegedly razed Sabarimala Temple, shoot and kill each other (hindupost.in)

52,939 total views In the din of the Supreme Court verdict upholding 10%