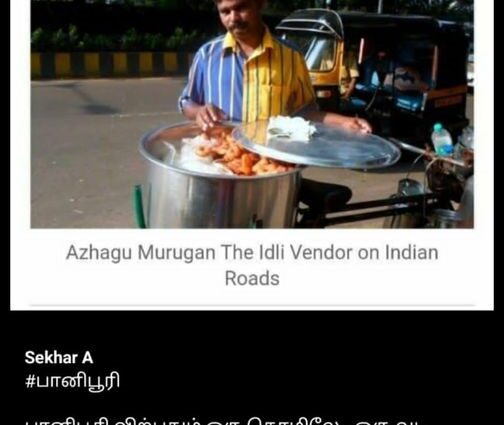 Apropos the DMK Minister who claimed that people who speak Hindi can only can only sell Panipuris, selling Panipuri is a good business… In your view, if mocking the honest work and survival of a North Indian in Tamil Nadu is right for you, then can the Tamilians selling idlis in Mumbai, Delhi and Hyderabad in cycles and rikshaws be mocked.

Do you know about Alagu Murugan who sells Idli and Dosa on a bicycle in Mumbai (Thane) and is hailed as “5 Star Itli Anna” for his honesty? Alagu Murugan hails from Krishnapuram near Madurai.

Murugan has been running an Idli and vada business on a bicycle near the Vasant Vihar Hanuman Temple in Thane (Mumbai) for 15 years. By the way, the North Indian who sells Panipuri, whom you mock, came here only 5 years ago. Alaku Murugan respects his profession and asserts, “My life is my profession”.

It is not enough to have only golden tresses in the name. Honest thoughts will only arise if you clean up the brain under that hair. It is a mental disorder of your Dravidian mentality to ridicule North Indians and sow seeds of separatism forgetting that they are also Indian citizens like Tamilians ​.

The name given to you by your parents is Deivasikamani . If you drop the name Deivam, which means God and only Sikamani is retained and changed to Ponmudi which means golden tress. Instead of speaking on Aryan-Dravidian just for political survival, why not change the name of husband and sons to pure Tamil names? Probably due to the confusion of their ancestors’ mother tongue Tulu language of Andhra and Tamil they couldn’t take a decision as to which language name they should have taken.

So, minister of 40th Pulikesi’s ministry, Please understand that only good thoughts will place golden crown on your golden tresses.

58,143 total views In the din of the Supreme Court verdict upholding 10%