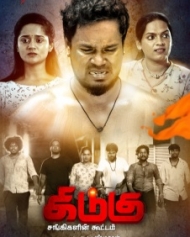 A new path-breaking Tamil movie titled, “Kidugu” is awaiting release which would bring in a revolutionary change in the discourse of Dravidian identity politics and intellectual debate in Tamil Nadu. The word “Kidugu” means a thatched roof or a shield. The director has kept this title for his movie to convey that Sanatana Dharma is the shield and refuge for all Indians. He further goes on to say that Dravidam is trying to break that roof or destroy the shield of Tamilians.

It is a bold and first ever movie in Kollywood where the darker side of Dravida movement and Dravidam is exposed. The entire story and plot of the movie is based on true facts. The director has taken an incident that happened in Velankanni and woven a very strong message around it. He uses the word Sanghi for the five protagonists who unabashedly call themselves as Sanghis and saviours of Sanatana Dharma.They help and save a woman who falls a victim to Dravidam and is exploited by them.

The dialogues are sharp and exposes the false claims of Dravidian parties that they fought for social justice and rationalism. In fact, in one of the dialogues the protagonist says that the first entry into Temples by Dalits was facilitated by a Brahmin, Vaidyanatha Iyer and he was supported by the legendary freedom fighter, Muthuramalinga Thevar. It was not EV Ramasamy who did it, contrary to popular propaganda.

Another dialogue in the movie which brings out the contradictory mindless prescriptions of Dravidian ideology for so-called social reforms is, where a female character is shown as saying “You conduct inter caste marriages by tying a Mangalsutra and claim to have abolished caste and then also cut the Mangalsutra by saying that it is not rational to wear it”. The movie exposes many double standards of the Dravidian ideology. The movie also questions statues of EV Ramaswamy installed all over Tamil Nadu, when he never wanted Tamil Nadu to be freed from British slavery.

The movie is yet to get Censor Board clearance as the Dravidian parties are against it. The movie crew is leaving no stone unturned to get the movie released. With the whole movie industry in the hands of the Mr MK Stalin family, it is going to take a Herculean effort to get theatres and release the movie. This is the first ever movie that is being made in defence of Hinduism and exposing Dravidam lies and double standards..

Hats off to the director, V Veera Murugan and his team of youngsters who have dared to make such a movie and take the bull by the horns.

Let us wish monumental success to the Kidugu team and as common public and dutiful Sanatanis, we should extend our full support to make this movie an all-time hit so that the Dravidian ideology is cast away in the dustbin of history forever.

Latest posts by Radha Thevar (see all)
2022-09-24
Previous Post: What Should be Set on Fire? 
Next Post: Why are Hindus Losing the Information War?