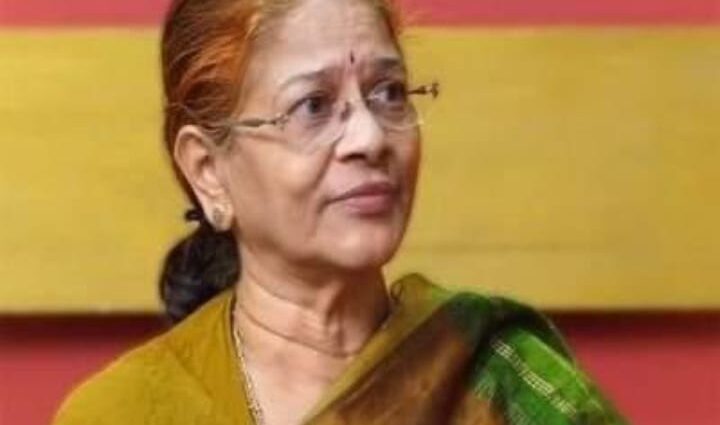 By: Gayatri N
In: People

The charismatic, feisty, bold and indomitable Uma Anandan on Tuesday, registered a historic victory for the Saffron party in the Greater Chennai Corporation polls. She is well known for her resolute unapologetic pro-Hindu, anti-Left and anti-EVR (EV Ramasamy) ideology. Her victory is historic not only for BJP’s first ever win in Chennai civic polls but also significant symbolically as it marks the arrival of Hindu politics in Tamil Nadu reclaiming Hindu Tamil heritage of Cholas, Pandyas, Thiruvalluvar, Subramanya Bharati etc. by rejecting the EVR perfidy.

Her victory ushers a tectonic shift in political discourse in Tamil Nadu hitherto dominated by anti-Hindu anti-Brahmin narrative since the times of EV Ramasamy Naicker who wanted Tamil Nadu to remain a colony and slave of the British even as the country was negotiating its independence in 1945-47.

The Bharatiya Janata Party (BJP) has also registered another historic first by winning most of the civic seats in Kanyakumari under the able leadership of the old Hindutva warhorse and union Minister of State, Pon Radhakrishnan. The BJP has emerged as the third largest party in the civic elections which was swept by the DMK. Fringe parties like cinema star Kamal Hassan’s Makkal Needhi Maiam Party got wiped out. BJP which fought the elections without any alliance emerged second in more than 5 wards in Chennai beating the AIADMK to the third position and won over 300 seats across Tamil Nadu in the recently concluded urban local body elections.

The giant killer was Uma Anandan who won in Ward 134 West Mambalam Chennai Corporation seat with over 2000 votes of winning margin. She secured 5635 votes for the BJP while the Congress allied with DMK and other 11 parties secured 3503 votes and AIADMK secured 2655 votes. Interestingly, fake news factory manufacturer TRB Raja, the IT Cell head of DMK, in his enthusiasm to spread fake news claimed that Uma Anandan had polled only 8 votes from Ward No. 132 which was faithfully carried by their media fellow travellers. The only hitch in it was Uma Anandan was the candidate from Ward No 134 which she won handsomely with over 2000 votes margin!

WHO IS UMA ANANDAN?

Uma Anandan, is an alumni of the Queens Mary College, Chennai and began her journey in politics in 1980s by joining the then fledgling Bharatiya Janata Party’s (BJP) Women’s Wing in Tamil Nadu. She was well known within the party circles for her sharp intellectual analysis, bold oratorship, depth of knowledge in Tamil history and sociology.

The turning point in her life came with the highly malicious cases foisted on Kanchi Shankaracharya Jayendra Saraswati Swamigal trying to destroy the 2500 year old legacy of the Kanchi Kamakoti Peetham by bringing it to disrepute in 2004. This propelled Uma Anandan to become a full-time Hindu activist to protect Dharma from Vidharmis and Adharmis. She organised huge protests against the arrest of the Swamigal in the politically motivated case fabricated by J Jayalalithaa headed AIADMK with tacit support of the Indian National Congress headed by Sonia Gandhi, the DMK and the left parties.

Pertinently, Dr. Subramanian Swamy, former cabinet minister and senior BJP member has on several occasions mentioned the fact the malicious prosecution and arrest of the Kanchi Swamigal was a watershed moment for him to decisively take up Hindu causes as the event  evinced an attack on the very foundational symbols of Sanatan Dharma by anti-Hindu forces in political establishment. The Swamigal was targeted for his instrumental role in curbing religious conversions and legislation of anti-conversion laws in the State.

Around 2006 there was a news report in The Times of India about how Uma Anandan firmly dealt with the evangelist mafia landing up at her home in Nungambakkam on Pongal and giving her gratuitous advice on how she should pray! A group of 50 odd young evangelists from North-Eastern states were roaming around the colony on the auspicious Pongal day trying to convert Hindu families while avoiding Muslim homes in the area.

Two of them even dared to trespass her home and entered the hall, she promptly locked up the two evangelists and called up the police to get them booked for their nefarious conversion business by insulting Hindu deities. She was threatened by the rest of the 50 odd evangelists who gathered in front of her house and tried to intimidate her for opposing the illegal activities of the other two evangelists who trespassed her home. Undeterred by the threats, Uma Anandan got the two evangelists arrested by the Police and filed a complaint against them for trespass, breaching peace in the area and hurting Hindu religious sentiments.

In 2007, when the Government of Tamil Nadu illegally took over Nataraja Temple in Chidambaram, she along with her long-time Temple activist friend TR Ramesh requested Dr. Subramanian Swamy to take up the case legally in High Court and Supreme Court. In 2014, a landmark judgement was pronounced in the Chidambaram Temple case on Dr. Swamy’s brilliant petition which would go a long way in unshackling Temples from government control.

Uma Anandan has been associated with the Temple Worshippers Society (TWS) from its formation in 2007 and is now its Vice President while TR Ramesh is the President. Uma Anandan is dedicated and passionate for protecting and preserving Temples, Agama shastras  and ensuring Temple management by and for Hindu devotees. The TWS has carried out an extensive survey on the pathetic condition of over 44,000 Temples under the control of Tamil Nadu government.

The TWS under Uma Anandan’s leadership has challenged several cases of illegal takeovers, mismanagement and misappropriation of Temple funds by the Hindu Religious & Charitable Endowments (HR&CE) Department under Tamil Nadu government in the Madras High Court and Supreme Court. Uma Anandan through the TWS has recently challenged the illegal appointment of Archakas in ancient Sampradaya Temples by the HR&CE department under the Tamil Nadu government in gross violation of the Agama shastras. The latest 2000 kg Temple gold loot scheme of the Tamil Nadu government under MK Stalin has also been challenged in the Madras High Court by her efforts along with the dedicated team of Temple activists and office bearers of the TWS.

Uma Anandan is also very famous for her bold views exposing EVR’s anti-India, anti-Hindu anti-Tamil activities, his crass anti-Dalit women attitude and his despicable act of marrying his own adopted daughter. She has also not made any bones about her strong criticism of MK Gandhi’s jihadi appeasement policies which resulted in the genocide of millions of Hindus.

Politically, she is seen in Tamil Nadu as a fearless voice of Hindus next to veteran senior BJP leader H Raja and the founder of Indu Makkal Katchi, Arjun Sampath. Uma Anandan’s Hindu activism has been shaped and hugely influenced by Dr Subramanian Swamy and V.S. Chandralekha especially for freeing ancient Temples from government control. Senior BJP leader, H Raja and veteran Hindu Munnani leader, Omampuliyur Jayaraman have been her mentors in Hindu political activism who exposed her to the genesis of the deceitful Dravidian movement and EVR’s vicious treachery which moulded her political ideology.

Uma Anandan also participated in the hunger strike by Hindu Munnani in September last year in protest against Stalin’s diktat of ban on public celebrations of Ganesh Chaturthi. Her blazing speech on the occasion became viral garnering over more than 2 lakhs views.

It is hoped that the new dynamic and capable BJP Tamil Nadu State Chief, K Annamalai under whose able leadership BJP has made new inroads in Tamil Nadu, makes good use of Uma Anandan’s enormous talents by giving her greater responsibilities commensurate to her abilities and stature.

Uma Anandan’s uncompromising pro-Hindu political ideology, brilliant oratory and commitment to preserve and protect Temples has won her a huge fan following across all castes and also made her target of relentless vicious vile abuses, death and rape threats from the Hindu hating Dravida Kazhagam (DK) Goondas in social media. Her Hindu Tamilian Brahmin identity makes her more vulnerable to attacks by DK criminal elements. Notwithstanding the harassment and physical threats, the petite and vivacious Uma Anandan has defiantly stood tall braving adverse conditions in her fight for nationalist Hindu Dharmic political ideology despite having lost her husband and living without any police protection.

Hence, it would not be off the mark to say that Uma Anadan’s success in electoral politics heralds the dispelling of the dark ignorance of vicious Dravidian politics with the sunshine of Dharmic Hindu political movement in Tamil Nadu.