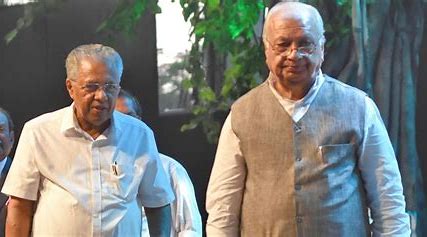 By: Gayatri N
In: Analysis

Kerala Governor, Arif Mohammad Khan gave an explosive statement to the press on Saturday, alleging that the Pinarayi Vijayan government has been scamming the taxpayers by using government money to fund lifelong pensions to the Communist Party of India (Marxist), CPM cadres.

He said that the CPM government gives out a dole of lifelong government pensions to personal staff of ministers just after completing two years and a few months of service. He said this was “gross violation and abuse of authority and a misuse and abuse of money of people of Kerala”.

He revealed in the press conference that the modus operandi used for lifelong bankrolling of CPM cadre is by coming up with a unique scheme of allowing appointment of 21 personal staff for Ministers who serve them for two years and few months and are later relieved from service with government pensions and a new set of personal staff are appointed in their place who also serve only for 2 years and few months. So the scheme seems to have at least 40 CPM cadre members per Minister gaining government pension scheme out of this ingenious mechanism in the 5 years of the government duration.

Governor Arif Mohammad Khan said that he is going to take up this illegal practice of the CPM government unjustly enriching CPM cadre members at the cost of the state exchequer.

It is pertinent to mention here that the practice of communists being freeloaders and living off taxpayers money is rife in academic arena too, especially in the social science departments of State and Central universities like Jawaharlal Nehru University, Jadavpur University and even the FTII where the subsidised tuition fees, hostel and mess facilities is misused to pursue their political agenda rather than use the infrastructure for higher studies. The communist teachers abuse their position to impose Marxist and Maoist political agendas while drawing salaries from the government. In fact they have devised an apartheid system where any student or teacher who does not subscribe to their ideological world view are punished with low grades and harassed so viciously that the student or teacher either gives in or abandons a career in academics.

Notably, recently the CPM government in Kerala headed by Pinarayi Vijayan has come up with an Ordinance to amend the Kerala Lokayukta Act, empowering the government to reject the verdict of the anti-corruption body. The Ordinance virtually renders the Lokayukta completely toothless and defunct, thereby encouraging a free for all corruption regime with no accountability. The Act also whittles down the qualification of the Lokayukta from an ex-Supreme Court Judge or ex-Chief Justice of High Court to any Judge of a High Court.

The highly controversial Ordinance comes at a time when three complaints have been filed to the Lokayukta against Chief Minister Pinarayi Vijayan accusing him of misusing Covid relief funds. The Lokayukta had earlier passed a verdict against Minister KT Jaleel of the Pinarayi government for abusing his position and promoting nepotism. KT Jaleel was forced to resign after the Lokayukta judgement. So, the move to bring in this Ordinance defanging the Lokayukta is seen more as a device to have corruption friendly unaccountable state administration. This controversial Ordinance has been challenged in the Kerala High Court and would in all likelihood be quashed for being illegal and unconstitutional  violating the basic structure doctrine of independence of judiciary and promoting corruption.

It is hoped that the Centre takes notice of the gross abuse of taxpayers money to fund party cadres and takes action by ordering a probe on the highly questionable practice of providing State pensions to private staff of Ministers and also legislates a central law to prevent further misuse of state exchequer for the enrichment of politicians. The much touted Kerala model of utopian commie governance is for all practical purposes a corrupt dictatorship with least concern for probity in public life and social welfare.

52,861 total views In the din of the Supreme Court verdict upholding 10%