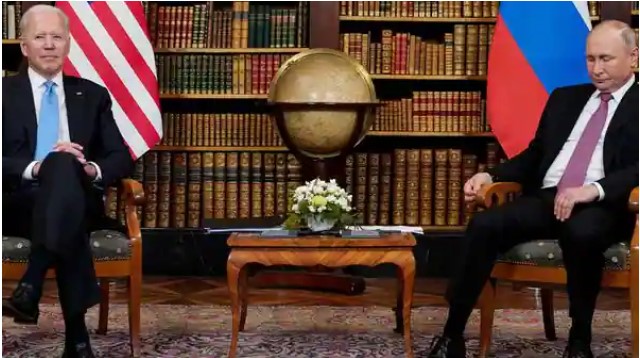 By: Umesh Agarwal
In: Opinion

The crippling sanctions announced by President of United States Joe Biden in response to Russian Invasion on Ukraine will have little bearing effect on Russia. President Biden announced that the U.S. and allies will BLOCK the assets of five large Russian banks, impose export controls, and will financially sanction oligarchs. This will limit Russia’s ability to do business in Dollars, Pounds, Euro & Yen. The largest Russian RU Bank will be cut off from US Financial system & access the debt markets, thereby eliminating the banks to raise funds from western financing and freezing of every asset in the United States. The sanctions also intend to block half of Russia’s high-tech imports.

The sanctions fell short of removing Russia from a network that allows seamless financial transactions across borders. The Society for Worldwide Interbank Financial Telecommunication (SWIFT) is a high-security network that connects financial institutions around the world. The network used by financial institutions send’s & receive instructions to felicitate transferring money across borders. The sanctions from Biden will lead to additional cost for countries to do business with Russia thereby affecting the shipments of oil, natural gas, copper, aluminum, palladium, and other important commodities, leading to inflationary trends across the globe.

According to Indian strategic thinker & policy expert Brahma Chellaney stated that Biden sanctions on Moscow will likely to turn China into Russia’s Banker, enabling it to reap vast profits and expand the international use of its currency, the Renminbi. Russia’s financial messaging system SPFS will be linked with the Chinese cross-border interbank payment system CIPS.In 2014 the west-imposed sanctions on Russia after they annexed Crimea. The sanctions led to China emerging Russia biggest export destination.   The bilateral trade between China & Russia reached $146.88 billion in 2021, up 35.8% from the previous year. Ahead of the Beijing Olympics in February 2022, both Xi Jingping & Vladimir Putin signed energy partnership agreement. As part of the agreement Russia will supply 10 billion cubic metres of gas per year to China.

Another Asian country India is playing strategic role in enhancing trade and economic ties with Russia. The bilateral trade during April 2020-March 2021 amounted USD 8.1 billion and during the visit of Russian President Vladimir Putin in December 2021, the trade targets were revised to increasing bilateral investment to US $ 50 billion and bilateral trade to US $ 30 billion by 2025 between India and Russia. Another key area India is working with Russia is to develop the Russian Far East Vladivostok by improving connectivity and marking it presence in Artic. The area of cooperation between India & Russia aims to develop new areas of cooperation in mining, agro-industrial, and high technology, including robotics, nanotech, and biotech.

Relations of Russia has improved with Israel, Turkey, Saudi Arabia, Syria, Egypt, South East Asian countries as well. The Sanctions from Biden & West will hardly impact them. The rising oil prices have helped Russia to increase it currency reserves to $600 Billion. The US Sanction is 2014 has forced Russian President Vladimir Putin to reduce its use of the US dollar to reduce the impact of US economic and monetary policy on its own economy. The subsequent actions followed was the Russian Central Bank reduced the holdings of dollars from its wealth fund to zero from its $119 Billion wealth fund. Currently Russia holds its reserves in Euro, Pound, Yuan and Gold. And further Russia has entered into agreements with several countries including India, to use national currencies for bilateral trade, thereby reducing its dependence on SWIFT network which is predominantly dollar centred.

The American sanctions will accelerate the use of alternative mechanism of trade settlement and reduce dependence on a dollar-centred payments infrastructure.

52,717 total views In the din of the Supreme Court verdict upholding 10%