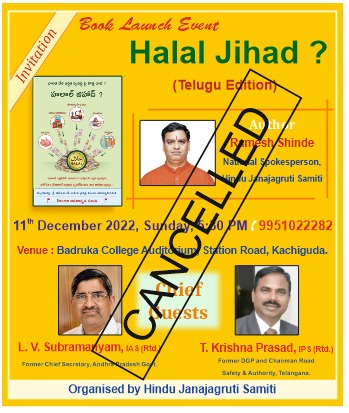 By: Gayatri N
In: Analysis

In a shocking development the Hyderabad city police has forced the cancellation of book launch on “Halal Jihad” (Telugu Edition) by not granting permission for the said event scheduled on Sunday, 11 Dec 2022 at Badruka college auditorium, Kachiguda.

The book is authored by Shri Ramesh Shinde, the national spokesperson of Hindu Jan Jagruti Samiti who has been at the forefront of creating awareness amongst Hindus about economic terrorism in the form of Halal Jihad for over 15 years.

It is surprising that the Hyderabad police under Telangana govt headed by KCR has refused the permission of book launch on Halal Jihad on the grounds of being a “law and order” issue. It is appalling that the same KCR govt allowed a comedy show by Munawar Faruqui under police protection despite huge protests against the event by Hindu organisations due to rabid abuse of Hindu deities by Faruqui routinely in his “comedy” shows.

It is was then touted by the oxymoronic left-liberals and all other Muslim appeasing political parties including TRS that freedom of expression is sacrosanct and should be allowed even if it includes abusing Hindu deities under the guise of “comedy” or rationality.

Well, the same freedom of expression seems to have evaporated in thin air when a book spreading awareness about Halal Jihad which controls nearly 3 Trillion Dollars of economy worldwide which has known to even finance Islamist terrorist activities in many parts of the world including India.

The concept of forcing Halal food on non-Muslims against their religious beliefs is in itself a gross violation of  fundamental rights. Moreover the process of making Halal meat is highly barbaric and involves extreme cruelty towards the animal butchered for meat. It is slowly bled to death causing deep trauma and pain to the animal before it finally dies.

The whole process of making Halal food mandatorily involves only Muslims as per their religious requirements. Hence, we now have an entire Hindu community of butchers called khatiks going out of business and in penury due to sale of only Halal meat in the market be it restaurants, hotels, airlines, trains, or even MNC food outlets like KFC, McDonald’s etc.

Then you have Halal labels extending to non-meat vegetarian food products, cosmetics, clothes, saloons, hospitals, even housing complexes etc. The list of Halal certified products is now endless. Home appliances like refrigerators, microwave ovens manufactured by Sharp Corporation have been certified as Halal products. There are shopping malls which are designated as Halal compliant where only Halal products are sold.

We also have Halal compliant tourism where Muslims are provided Halal meals, air travel, houses, hotels, prayer halls etc. The main objective of Halal tourism is to divert Muslim money to Muslim countries for tourism and keep them away from travelling to other non-Muslim countries or to extract special packages for Muslim tourists from non-Muslim countries. There are also Halal dating websites like, ‘Mingle’ for Muslims to meet each other.

Halal Certification Boards are private bodies which have links to Jamat e Islami and rake in huge amounts of money by charging fees from companies desiring to get Halal certification for their products. It is a business where Islamic organisations need no investment. Companies pay them money for the Certification as a narrative is propagated in general to thrust Halal products on non-Muslims. As they cannot make a huge amount of money just by selling Halal products to Muslims.

In fact the Islamic countries refuse to import any products which are not certified as Halal, thereby they are creating an economy which ensures enrichment of Muslims and conversion of non-Muslims to Islam by sheer economic apartheid. Halal Certification is Economic Apartheid and Economic Jihad on non-Muslims to wipe out Kafirs through economic monopoly.

This book by Shri Ramesh Shinde is designed in such a manner to educate laymen about Halal Jihad in simple easily understandable language and also provides solutions to counter Halal Jihad at individual and community level.

Hence non-Muslims consumers are paying Jaziya tax whenever they buy Halal products. The book highlights that the money generated through Halal economy is used in funding terrorist organizations worldwide. In India the Jamat Ulema e Hind Halal Trust is the primary organization which issues Halal certification, it funds and supports all jihadi terror accused by providing them free legal support including getting them the services of best senior advocates for their acquittal. They are presently supporting 700 accused Islamist terrorists belonging to LeT, Indian Mujahideen, Islamic State, etc. The Jamat Ulema e Hind also finances legal support for Islamist murderers who kill Hindus for so-called “blasphemy”, for instance the Islamist killers who brutally hacked Kamalesh Tiwari, caught on camera, are being given legal support by the Jamat.

Saying no to Halal products is the first step towards banning Halal certification in India. Invariably all companies including Ramdev Baba’s Patanjali and Haldiram have obtained Halal certificates for their products as exports to Islamic nations mandates Halal Certification and also helps in sale of their products to Muslim consumers in India, as the normal Hindu consumer simply does not care whether they are served Halal or non-Halal products. The price paid by companies in getting this Halal certificate is obviously passed on to the consumers in the cost of these products.

The TRS govt by not allowing launch of this book on Halal Jihad, which is freely available in Marathi, Hindi, English and Kannada, is actively being an agent of Halal Jihad as it seems to be unconcerned about the threat Halal economics poses to national security. In a way, it is only expected that the Telangana government under TRS decided to suppress the launch of the Halal Jihad book as two years back in Hyderabad, the TRS government with great fanfare facilitated hosting of the first edition of International Halal Expo in a grand scale with over 15000 people attending the event.

Thus, the Hindu ‘majority’ in democratic ‘secular’ India do not have freedom of speech nor freedom of food choice and are being subjected to economic apartheid through Halalonomics or Halal Jihad.

N.B.: The book Halal Jihad is available online on www.sanatanshop.com for just Rs.45.

Kindly donate to Bharat Voice at https://rzp.io/l/5HCr6XZNU to support our work for Dharma.

53,069 total views In the din of the Supreme Court verdict upholding 10%