By: Prof Hari Om
In: Politics

On January 25, the Narendra Modi Government shocked and dumbfounded the nation. That day, it also selected the Congress leader and former J&K Chief Minister and Leader of Opposition in the Rajya Sabha, Ghulam Nabi Azad, for the Padma Award for the year 2022. The announcement said that Azad was selected because of his “contributions to public life”.

As said, the mind boggling selection of Azad for the Padma Bhushan Award shocked and dumbfounded the nation. A brief reflection on what the ruling coalition in J&K comprising the Congress, the PDP of Mehbooba Mufti, the PDF of Hakim Yasin and the CPI-M of MY Tarigami and the main opposition NC of the Farooq Abdullah and Omar Abdullah did in the Assembly during the 2007 budget session in Jammu would be in order to show what the Ghulam Nabi Azad-led coalition government actually did to hurt the nation, subvert all the cardinal principles of secularism and democracy in a most brazen manner to further strengthen the Kashmiri Muslims hegemony over the state polity and jeopardise the legitimate rights and interests of the already rather suffering people of Jammu province. Hence, a reference to their attitude to at least eight “Private Member’s Bills” introduced in the J&K Legislative Assembly during the budget session.

One, one of the coalition partners, moved a “Private Member’s Bill” in the Assembly seeking support of the House in favour of the suggestion that there should be only one flag for the state.  In effect, the bill highlighted the significance of the national flag and wanted all the political parties to adopt the same so that the provisions concerning the state flag were repealed and the national flag reigned supreme in J&K as was the case with other states of the Union. All the coalition partners, without any exception, and the opposition NC summarily rejected the landmark “Private Member’s Bill”, which was simply aimed at integrating the state with the rest of the country or bringing the state on a par with other states.

Two, it may sound unbelievable and ludicrous, but it is a fact that all the coalition partners, with the exception of the Jammu-based Panthers Party, adopted in no time a “Private Member’s Bill”, which was moved by the opposition NC. The bill provided for one-year imprisonment for those who would not show the kind of respect the state flag deserved. The NC had moved the bill to counter the BJP’s age-old one-flag (national flag) and one-constitution (Indian Constitution) slogan. The defeat of the “Private Member’s Bill” on the national flag and the adoption of the bill on punishment for those not showing due respect to the state flag and the unqualified support extended by the ruling party to the Valley-based outfits had sprung a big surprise.

Three, the BJP legislator moved a “Private Member’s Bill seeking citizenship rights for the Hindu-Sikh refugees from West Pakistan, numbering approximately 1.5 lakh. He made a passionate plea to the House that his bill needed to be passed as these hapless refugees had been denied their fundamental rights, including the right to own immovable property in the state, right to contest election to the Assembly and local bodies, right to franchise, right to equality, right to higher and professional education, right to bank loan, right to obtain jobs under the State Government and so on, but with no result. The ruling party and all other parties, barring the Panthers Party and the RSS-supported Jammu State Morcha(JSM), opposed the bill tooth and nail. The result was that the bill collapsed.

The opposition of the ruling Congress to the bill was beyond comprehension considering the fact that Manmohan Singh (then Prime Minister), Lal Krishna Advani (former Deputy Prime Minister and Leader of Opposition in the Lok Sabha), Inder Kumar Gujral (former Prime Minister), Jagmohan (former Governor and Union Minister), Arun Shourie (then member of Rajya Sabha and former Union Minister) and so on were all refugees from Pakistan. That the Congress and the NC, the PDP, the PDF and the CPI-M joined hands and got the bill defeated only indicated their lack of commitment to the human rights of the refugees from West Pakistan, as also their willingness to go with those in Kashmir who were opposed to those refugees on the ground that their empowerment would change the demographic profile of the Assembly segments in Jammu and enhance the Jammu’s representation in the legislature. They considered these refugees as aliens.

Four, one of the coalition partners, the Panthers Party, moved another “Private Member’s Bill” seeking incorporation of the words “secularism and socialism” in the preamble of the J&K Constitution. The upshot of its whole argument was that “since the preamble of the Indian Constitution contained these two words, the same needed to be incorporated in the State Constitution so that the state polity was given a secular and socialist orientation”. The bill failed to carry conviction. The ruling Congress, its coalition partners, including the Left parties, plus the opposition NC, rejected out-of-hand the bill, thus indicating their hatred for the cardinal principles of secularism and socialism.

Rejected Parity of  Representation for  Jammu & Kashmir  in Assembly

Five, the Panthers Party moved yet another “Private Member’s Bill” in the Assembly in the same session. It was designed to ensure parity between Kashmir and Jammu as far as their representation in the Assembly was concerned. The bill said that Jammu province and Kashmir division each be divided into 52 Assembly segments so that the Jammu’s age-old grievance was redressed. But it was bitterly opposed. The ruling Congress, like the PDP, the NC, the CPI-M and the PDF, repudiated this bill outright. The opposition of the Congress to the bill was all the more surprising considering the fact that its core constituency was Jammu province, especially its Hindu-majority areas.

Six, the NC sprung a surprise in the Assembly when it moved a “Private Member’s Bill” seeking protection of the temples and shrines of the internally-displaced Kashmiri Hindus. It was expected that this bill would be adopted at once. But it did not happen. All the coalition partners, excluding the Panthers Party and the BJP and the JSM, joined hands and ensured the defeat of the bill. It is hardly necessary to catalogue the reasons behind the opposition of the ruling coalition to this bill.

Adoption of Sharia Laws for J&K

Seven, the NC moved another “Private Member’s Bill” on the need to adopt Shariat laws. While the ruling coalition and the Panthers Party extended their unqualified support to the bill and adopted it, the BJP and the JSM opposed it. The ideologue of the PDP and Deputy Chief Minister, Muzzaffar Hussain Beig, did express some reservations, but ultimately he also voted for the bill.

Rejected  Reduction of Assembly Duration from 6 to 5 Yrs

Eight, the Panthers Party moved one more “Private Member’s Bill” seeking reduction in the life of the Assembly from six to five years. Its argument was that “since the term of the assemblies in the country was five years, the J&K Assembly should also be constituted for a period of five years”. The Bill was defeated in no time. The then Health Minister and Congress leader, Mangat Ram Sharma, made a mockery of himself when he said in the Assembly that the bill, if adopted, would mean “reduction in the pension of the legislators”. He said that “six-year term benefits the legislators”. The NC and the PDP, on the other hand, opposed the bill saying that “J&K enjoys a special status within the Union and, hence, the life of the Assembly has to be six-year”. It needs to be noted that it was the NC, a staunch supporter of greater autonomy, which had in 1977 adopted the central legislation enhancing the life of the Lok Sabha and the assemblies from five to six year — legislation which the Janata Party Government repealed.

The bitter opposition of the ruling coalition and the NC to certain “Private Member’s Bills” and their unqualified support to certain other bills during the Azad’s regime indicated two things: Support for those bills which had the potential of further widening the already rather wide gulf between the state and New Delhi and opposition to those which had the ingredients of bringing the state closer to New Delhi, secularizing the state polity, empowering the refugees from West Pakistan and dispensing justice to Jammu province. The message was that they stood for a system that was different from what was in vogue in the rest of the country.

Wrong Implementation of Wazir Commission Report For A Muslim Kashmir

Not just this. In 2007, Azad also did his best to further disempower Jammu province. He applied the 1981 Wazir Commission Report in a wrong way to help Muslim Kashmir. He created four new districts in the small Kashmir Valley, as against one as recommended by the Commission and four in Jammu, as against three as recommended by it. The people of Jammu province have been fighting since decades for more districts, saying it was two-time that of Kashmir and the bulk of its terrain was mountainous, difficult, treacherous and inaccessible. The same year, he proposed to create 25% assembly seats in the already over-represented Kashmir and 25% in the under-represented Jammu, but failed. Had he succeeded in his evil game plan, the number of seats in Kashmir would have gone up from 46 to 58 and Jammu would have got 46, as against the existing 37 seats.

Not content with all this, Azad applied the 2001 obnoxious Roshni Act ruthlessly. Farooq Abdullah Government had enacted it. Its application caused loss to the state exchequer to the tune of Rs 25,000 crore and helped Zameen Jihadis loot and plunder around 24 lakh kanals of state land, mostly in Jammu.

And what about his stand on the Indian Army and the August 5, 2019 reform scheme that abrogated seditious Article 370 and discriminatory Article 35A, created of UT of Ladakh out of the J&K State and converted the remain state of J&K into another UT? He has been repeatedly accusing the Army of killing innocent civilians and attacking PM Narendra Modi for his otherwise epoch-making reforms of August 5, 2019.

All this should put things in perspective and establish that Azad’s whole approach is fundamentally communal, separatist-friendly, anti-India, anti-Hindu, anti-Buddhist, anti-Jammu and anti-Ladakh. Indeed, by selecting him for the Padma Bhushan Award, the Modi Government has accorded dangerous respectability to a communalist of communalists. The Modi Government would do well to reject his selection in the larger national interest and assuage the hurt feelings of the nation. 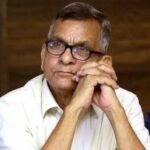 52,703 total views In the din of the Supreme Court verdict upholding 10%