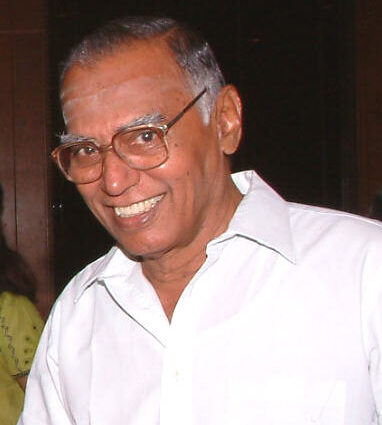 By: Gayatri N
In: People

As India celebrated the 125th birth anniversary of Bharat Mata’s most illustrious and valiant son, Netaji Subash Chandra Bose, with PM Modi unveiling his hologram statue at India Gate under the canopy where once stood the statue of King George V, in came the news of the demise of another great son of Bharat, Dr. R Nagaswamy the colossal giant of archaeology and epigraphy and an intellectual extraordinaire.

R Nagaswamy, a Padma Bhushan awardee was the first director of Tamil Nadu’s Department of Archaeology. He was 91 and is survived by two daughters and two sons. He passed away in his Besant Nagar residence at Chennai.

Nagaswamy was an authority in archaeology, architecture, epigraphy, numismatics, iconography, South Indian bronzes and Temple Agama shastras. He was passionate about preservation of ancient Temples, its rich cultural traditions. His advanced age did not deter him from writing books on archaeology and epigraphy. He was a master in Tamil, Sanskrit and Brahmi script. He was a postgraduate in Sanskrit from University of Madras and a PhD in Indian Arts from University of Pune. He served as the Director of Tamil Nadu’s Department of Archaeology from 1966 to 1988. The annual Chidambaram Natyanjali festival was pioneered by him in1980.

He leaves behind a reservoir of information and knowledge penned in the various books written by him like the Vedic Roots of Hindu Iconography, Vishnu Temples of Kanchipuram and Tirukkural an Abridgement of Sastras. He has also written books on Mamallapuram, Uttaramerur and Gangaikondacholapuram.

His expert views on South Indian history, Agamas, Temple architecture, Chola bronzes and Bharatanatyam are regarded very highly. He was one of the rare intellectuals who was intellectually honest to very boldly present his research evidence on the 2000 years old Tirukkural’s origins from the Vedic Shastras in contrast to the communist and evangelist spin doctored claim of Tirukkural having some imagined Dravidian or Biblical origins. In his interview with Rajiv Malhotra he even described how the famous saint-poet Tiruvaluvar’s Tirukkurals were a translation of the Manu Smriti.

The very word archaeology evokes his image as he popularised archaeology by bringing out pocket books popular among children. He was instrumental in designing affordable tourism guides on ancient Temples and archaeological sites which made the subject of archaeology and Temple architecture popular among the masses.

Sri Iyer in his tribute in pgurus.com mentions that in Nagaswamy’s recent seminal work Dharma Yoga released in 2020 shows how the Greek coins had Greek inscriptions on one side and Brahmi inscriptions on the other. The said book also highlighted the striking similarities between Manu’s Dasa Lakshana of 1850 BCE and the Ten Commandments and the worship of Indra, Mitra (Sun God)were prevalent  even after the advent of  Christianity.

More importantly Nagaswamy’s unequalled expert evidence in London court in re Paththar Natraja idol  case played a decisive role in bringing back the Natraja idol of Chola era to Tamil Nadu in 1990. His evidence in the Ramjanmabhoomi case also played a vital role in winning back the holy site after nearly 550 years of struggle.

He is also credited for protecting and preserving several historical monuments like the 1st Century Chera inscriptions at Puglar, the palace site of the Cholas at Gangaikonda Cholapuram, the famous 17th century Tirumalai Nayak Palace at Madurai, the 17th century Danish Fort at Tranquebar and the birthplace of the great freedom fighter poet Subramania Bharati at Ettayapuram besides excavating the palace site of Virapandya Kattabomman at Panchalankurichi.

Last but not the least, his life’s contributions can be summed up in his most influential book, “Tamil Nadu The Land of Vedas” which is a seminal work in the study of Tamil culture, Tamil Kings of the Sangam age adherence to the Dharma Shastras, Vedas, Vedangas. It thus established Tamil Nadu as the cradle of Vedic civilization demolishing the anti-Hindu narrative inventing a separate non-Vedic “Dravidian” identity. Personally, he was equally a very humble and modest person as he was an intellectual genius, ever so ready to help anyone who approaches him to seek his guidance for research on Indian archaeology and epigraphy.

Nagaswamy’s yeoman contribution to Tamil Archaeology has been recognised by various organisations. He has been honoured by the Government of Tamilnadu by the Kalaimamani award. He has also been conferred the Padma Bhushan award in 2018.

Naman to the great irreplaceable son of Bharat Mata who leaves behind a rich legacy and a very high benchmark for future generations of archaeologists, architects and epigraphists. Dr. R Nagaswamy is truly the uncrowned Bharat Ratna!

52,873 total views In the din of the Supreme Court verdict upholding 10%