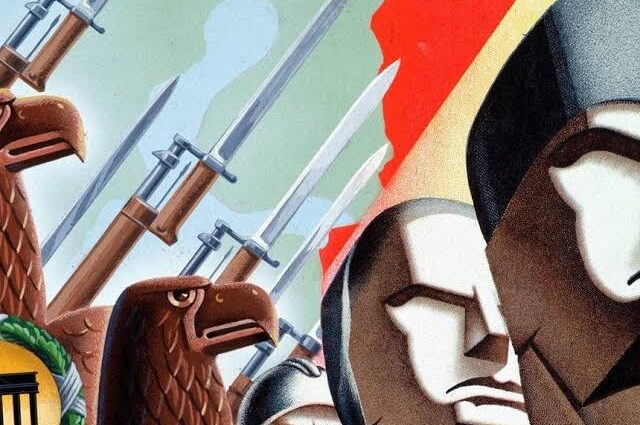 In spite of efforts by the Left-Liberal – the new age communist, to conflate two very distinct ideologies of fascism and nationalism, the latter continues to gain precedence over any other ideology. Nationalism poses an existential challenge to communism and therefore it will remain on target of the Left Liberals. Nationalism is a virtuous endeavor so how does one demonize it? By painting it into something else, into something dangerous and reprehensible.

Nationalism has been the favorite whipping boy of the left. They try to confuse the narrative by making nationalism synonymous to fascism. As a result our nationalists are painted as fascists, our ideology of “Desh Prem” denounced as fascism and minor instances of people protestig when someone doesn’t respect the national anthem are described as fascist attacks on individual liberties. Let us try to understand the difference and increase our understanding of the two concepts. Like any ideology Fascism is a complex totalitarian ideology and it cannot be dummbed down into a few lines. However one can get a broad understanding of the concept. Do read on.

Some say Fascism is an extension of the past. It finds its root in mythology, of hallowed days of glory, of its people leading virtuous lives while ruling the world through acts of glorious bravery and will of gods. Invariably all these myths have women staying at home raising the new breed of warriors.

Proponents of Fascism use days of glorious past (real or imagined) to create a desire to go back to that long lost glory days. As it is impossible to return, to go back in time Fascism therefore exhorts its people to recreate those glorious days of the past in the here and the now of the present. The opponents of Fascism, the left liberals like to equate this description of Fascism with Nationalism. But is it so or is this equity a creation of an ideology that competes with Fascism for totalitarian control of the human mind?

Like all totalitarian regimes, Fascism places itself beyond scrutiny by scholars or public. It is now a term of political abuse beyond serious ideological analysis. Self-proclaimed fascists have put

fascism is beyond any critical analysis, intellectual or casual. They despised those who seek

By seeking its roots in the long lost glory (real or imagined) of the past, Fascism is essentially Right Wing. The term Right Wing, in itself is fallacious. The term was coined by the essentially, anti-establishment, the Left Wing. Like so much of the western thought, unsurprisingly, both the terms are of French origin.

The Left & The Right are political terms that were first used in the 18th century, during the French Revolution. It related to the seating arrangement of the French parliament. The French Parliament was composed of 3 factions – The royalists (ruling class & supporters of monarchy), The clergy (of the church of France) & the third estate (commoners). Those who sat to the right of the chair of the presiding officer (le président) were generally supportive of the institution of the monarchy. The third estate, the commoners, sat on the left of the president and were opposed to those who sat on the right side – the royalists. The original “Right” in France was formed in reaction to the “Left” and comprised those supporting hierarchy, tradition, and religious clergy. The expression la droite (“the right”) was increasingly accepted to describe those who stood for monarchy. It gained prominence after 1815 when it was used to describe the ultra royalists.

Fascism wants man to be active and to engage in action with all his energies; it wants him to be manfully aware of the difficulties besetting him and ready to face them. It conceives of life as a struggle in which it behooves a man to win for himself a really worthy place, first of all by fitting himself (physically, morally, intellectually) to become the implement required for winning it. As for the individual, so for the nation, and so for mankind. Hence the high value of culture in all its forms (artistic, religious, scientific) and the outstanding importance of education. Hence also the essential value of work, by which man subjugates nature and creates the human world (economic, political, ethical, and intellectual).

Like so many totalitarian regimes, Fascism hides behind words that sound so correct and harmless. It hides its claws behind words that demand honesty, hard work, perseverance, loyalty and truthfulness (who wouldn’t want to emulate these in their lives). The devil lies in the detail – that demands absolute loyalty to the cause – even when it is against common human values and rights. Fascism demands unquestioning perseverance & hard work on the path to reclaiming the golden age of the past.

The above sound so familiar to us today now that we have seen the face of totalitarianism – be it religious (Iran, Pakistan, Syria, Afghanistan) that manifests itself in calls to arms against the unbelievers, the communist left (Russia, China, Venezuela) manifesting itself as oppressive regimes commanding genocides of its own citizens. One more similarity between all these totalitarian regimes and ideologies is the search for a promised Utopia. A Jihadi kills innocent humans as he seeks his entry into heaven. A communist kills because he seeks to establish an equal utopian society.

The left loves to equate fascism with nationalism in that both these ideologies find their roots in the past. Both seek an utopia. BUT a fascist ideology seeks to recreate the past in the present, nationalism seeks to create a better future that may or may not have elements of its past. Nationalism is ever evolving as the definition of a nation keeps changing with time. Migrations change the demographics and identity of ‘who’ constitute a nation – something a fascist hates. A nationalist loves the nation and strives to take it forward to make it better. A nationalist embraces a nation’s diversity and is ready to fight to protect it.

In contrast, in Fascism, people are rallied into a frenzy over the need to eliminate a perceived common enemy (something that it has in common with its rival “left wing” communism). This common enemy can be anyone the ideologues deem unfit and unworthy. Often religion and government are intertwined in a manner that makes them inseparable. In contrast, to a nationalist, religion is one of the many distinct aspects that define ones nation/motherland.

Fascism demands and enforces absolute obedience and it uses a police force with near unlimited powers and zero accountability to enforce its views. To a nationalist this idea of a police state is anathema. He seeks a nation of laws and accountability.

In a fascist state the corporate financial power is hand in glove with the state (crony capitalism) but in a nationalist state, the corporate is one more branch that serves the state and welfare of its people through creation of wealth and jobs.

52,933 total views In the din of the Supreme Court verdict upholding 10%