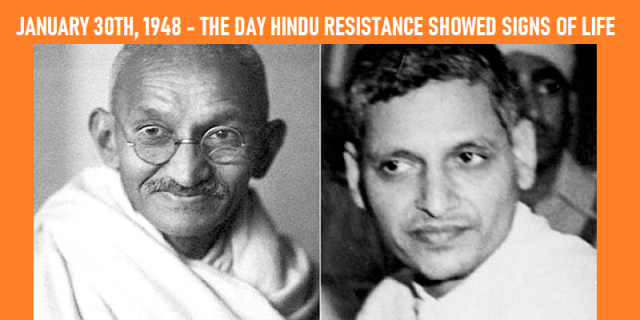 By: Rajiv Varma
In: History 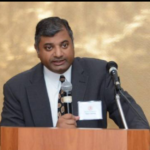 January 30th, 1948 is the day when M.K. Gandhi was assassinated by Nathuram Godse. This commentary will focus on the act of assassination, and how this particular one has been used and exploited in the ideological tussle and political engagement. A narrative of guilt and despair has been established, and the same is reinforced on every anniversary of this day. This narrative of guilt has been manufactured to keep a certain population on the defensive about its identity, its place in history, and its yearning for freedom that it seeks from its long periods of colonization. This narrative has been deployed by the past colonialists, their surviving agents in India, and their benefactors in the world. And now the same set of forces, both in and outside India, are galvanizing into a cabal of neo-colonialists who will attempt to do to India what Qasim, Tughlak, Babur, Aurangzeb, Clive, Hastings and Mountbatten were not able to accomplish in full.

What happened on January 30th, 1948 was not something very unique in world history. Political assassinations have been part of history since the very beginning. The assassin of Gandhi has been vilified much more than what his counterparts in other parts of the world have been. A cursory look at world map and the respective timelines of nations will tell a long tale of assassinations. In no case, the assassin has been as vilified as Godse. Every debate in the Indian Parliament, the non-BJP parties do not lose even a minute to point their fingers at BJP members, and sheepishly the BJP members join in the circus of apologetics appearing to be embarrassed and defensive. BJP was formed in 1980 in the aftermath of the failed Janata Party experiment. Gandhi was assassinated 32 years earlier. And yet BJP leaders appear to be carrying the load of the guilt narrative like political mules. Why?

The guilt narrative is not just limited to the BJP. Of course VHP, RSS, Hindu Mahasabha and other Hindu groups have always been finger pointed to. RSS has tried to cleverly hide the fact that Godse had once attended its Shakhas. RSS and its frontal organizations have filed lawsuits in this regard, and actually won the legal cases. Hindu Mahasabha leadership (Veer Savarkar mainly) was attempted to be implicated by the prosecutors, but courts had ruled against the case. There was no case established for Veer Savarkar’s involvement. Yet, the cabal of neo-colonialists do not fail to do their finger pointing. And Hindu Mahasabha appears to have internalized the guilt narrative, and looks like they have even taken the psychological ownership of it. Why?

The height of absurdity of the guilt narrative was once reported in the magazine India Today. In one of its issues of this magazine, in the aftermath of demolition of Babri Mosque by the karsevaks on Dec. 6th 1992, had said something to the effect that “… assassination of Gandhi makes every Hindu guilty …”. Every Hindu is guilty of Gandhi murder? Really Monsieur Aroon Poorie? (Never mind the Editor/Owner of this magazine is a Christian, who acts no less than a modern day British Viceory). The fact of the matter is that Godse and his team of assassins acted alone, without any sanction of any organization whatsoever. Neither RSS not the Hindu Mahasabha had any role to play in this assassination. This assassination was just like any other assassination. One individual or a small group crossed a certain invisible line in the sand, and went overboard. It is as simple as that.

Today, does anyone remember Gavrilo Princip? The man triggered a whole world war. Do the Europeans call every Serbian guilty of murder, for Gavrilo Princip’s act of assassination of Archduke Franz Ferdinand? Does the assassination of Abraham Lincoln makes every southerner guilty? For the personal acts of John Wilkes Booth and Lee Harvey Oswald, how many innocent lives were taken in revenge? The answer is ZERO. Jack Ruby killed Oswald who was the assassin of Kennedy. But did someone kill Oswald’s extended family or his community thereafter? Compare to Godse now – how many Maharashtrian Brahmins were slaughtered, intimidated and put behind bars? The answer is – a lot.

It should be amply clear at this point, after 7 decades of calumny and plain lies, there is a game of psychological subterfuge going on all these years. The cabal of neo-colonialists has been using this as an ideological paperweight on Hindus, so that they do not open their minds and their mouths. This is the cabal that seeks to complete the unfinished agenda of the long colonial era. And the declaration of this agenda has been made by none other than George Soros recently ( ref – https://theprint.in/world/frightening-setback-in-india-democratically-elected-modi-creating-hindu-state-george-soros/353960/ ). The cabal does not want Hindus to break their chains of slavery. India can only exist as a colony. Otherwise it cannot exist. It needs to be broken up. That’s what they want. The recent anti-CAA protests all over the world – in simple terms is a joint Ummah-Left uprising against the Indian state. India is under attack.

Time has come to demystify an assassination. There was nothing extraordinary about it. It was business as usual in world history and politics. The world has seen plenty of such acts, and will continue to do so in the future. It did not deserve to be in the headlines more than a day or two. Its virulent preservation and propagation needs to be studied closely. What are the forces milking it and for what purpose? Along with a study of its real ideological beneficiaries, there is a need to take a second look at why did Nathuram Godse did what he did. In its testimony, Godse explains in vivid detail – available as “May It Please Your Honor”- why he killed Gandhi. Neither did Booth, nor Oswald, nor James Earl Ray and definitely not Gavrilo Princip, have left such vivid details of their respective reasons. Godse’s testimony needs to be re-evaluated against this very differential. Godse cannot be put in the same category of Booth, Oswald, and Ray. Perhaps Godse was attempting something else and something more than what would typically be the objective of a political assassination. We are never going to know what was in Godse’s mind, other than his deposition in the courts.

It would serve well to connect several dots and make an attempt to discern what would be the ideological position of such an act. The act may sound negative in the literal sense, because an assassination can never be justified, but then it may have accomplished something after all. There is a field of study known as psycho-history – pertaining to the study of psychology of history, an applied branch of humanities. Just like individuals go through the cycle of birth and death, and everything in between – childhood, matrimony, and old age, civilizations also have a lifecycle. Some civilizations were born, attained unimaginable heights, but passed away in history. Egypt, Sumeria, Babylon, Greeks, Romans, Persia are memories of distant past. It is only the Indian civilization (in addition to China) that has survived the vagaries, the trials and tribulations of time. This civilization’s biggest challenge came in 1947, when for the first time in history the earlier colonizers (the muslims) had managed to chop two sides of the homeland of Bharata. The agent provocateur of this dismemberment was none other than M.K. Gandhi, who had laid the foundation of this civilizational murder in his advocacy for the Islamic Caliphate. Godse may have murdered a political leader, but Gandhi had assassinated an entire living civilization by his puerile act of support of Khilafat. What Godse did was to assassinate a bigger assassin. This is the day that the Hindu civilization showed some resistance to its assassin Gandhi. The neo-colonialists will naturally and always vilify Godse. For Hindus, he saved their civilization by offering resistance. Godse is the one who prevented his civilization’s corpse to be embalmed and put in a museum.

It is incumbent upon the Hindus to stop being victimized by the guilt narrative manufactured by its own tormentors. They must continue to seek freedom in its totality from the colonial slavery. And must wage a counter-war against George Soros and his neo-colonial cohorts. This time to finish off the colonialists once and for all.

52,835 total views In the din of the Supreme Court verdict upholding 10%