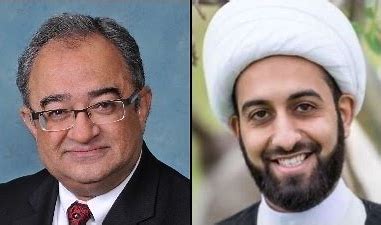 By: Rajiv Varma
In: Analysis

There is a certain hope entertained by a section of Hindus buying the arguments put forward by Tarek Fatah and Imam Tawhidi calling for de-politicization of Islam and making it more of a private practice in a bid to co-exist peacefully without conflict in a multi-cultural multi-faith world.

This is a mere chimera chased by iffy Hindus who want to desperately accommodate dogmatic Islam with some ‘reforms’. Tawhidi’s and Fatah’s efforts to conceive a non-political Islam are welcome, but one needs to study Islam at a deeper level to arrive at the conclusion that Islam cannot be divided into public and private. It is one single spherical whole. It is designed that way.

All said and done, Tawhidi and Fatah will prove to be more dangerous to Hindus than the likes of Shah Waliullah and Maulana Maudoodi. Enjoy Tawhidi and Fatah as good entertainment, nothing more than that. Make no mistake, for a Kafir/Pagan/Heathen, Islam and Christianity can only be destroyed – not “reformed” or modified.

Similarly, there is a remote chance for Judaism to be scaled back to Pre-Moses period prior to parting of the Red Sea. We can examine the evolution of Christianity too in this context.

We do need to recognize the efforts of Renaissance and post-Renaissance intellectuals and thinkers, from Voltaire to Tolstoy, to rescue European Society from the fangs of Christianity and yet retain Jesus and his religion in some “private” form as is being suggested for Islam.

This kind of effort in Europe resulted in the phenomenon of ‘Secularism’, which quite paradoxically ended up in creating a facade that protects the fangs of Christianity, instead of de-venomizing it. The phenomenon of Secularism, thus ended up becoming the retrofitted equivalent of Al-Taquiyya in Islam. Secularism today serves as Christianity’s and Jesus’ Doctrine of Deception, as  Al-Taquiyya for Islam.

Henceforth, let us Hindus along with our Pagan/Heathen/Kafir brethren, not buy into the chimera being created by Tawhidi and Fatah. Enjoy them, but not take them seriously.

The only viable long-term solution lies in planning for and working towards complete elimination of Christianity and Islam. There is no other way out. Let us rescue Christians and Muslims out of these virulent diseases. There will be some collateral damage but then which war has come with zero collateral. These wars will have theirs. It is payback time for Hindus after continuing to suffer a huge price for over 1400 years at the hands of these predatory dogmatic cults.

52,905 total views In the din of the Supreme Court verdict upholding 10%