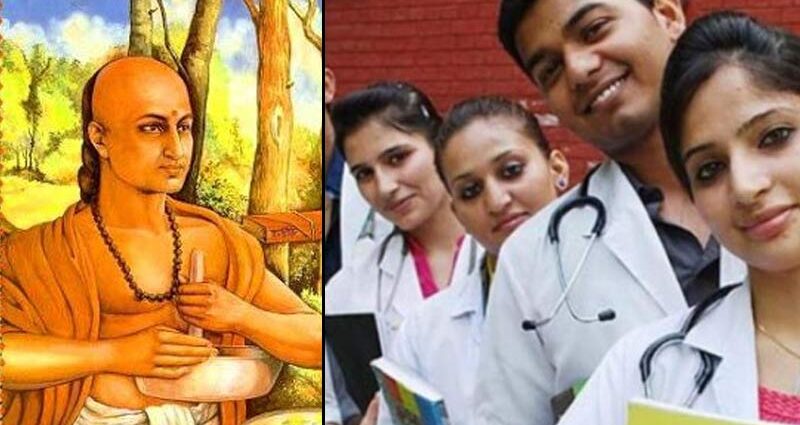 The Stalin government with deep rooted hatred for Hinduism, Hindu culture, traditions and knowledge systems has gone berserk against Charak Shapath being administered instead of the Hippocratic Oath to the fresh batch of MBBS students at Madurai Medical College. The visceral hatred for anything associated with Hindu heritage is so deeply entrenched that in a draconian move, the Stalin government removed the Dean of Madurai Medical College, Dr A Rathinavel from his post and put him on waiting list for letting new students take the “Maharishi Charak Shapath” in place of the Hippocratic oath on 29.04.2022.

The Stalin government has ordered a departmental inquiry and in an official release stated that the Dean of the state run Madurai Medical College has been removed from his post for violation of rule and unilaterally making students take the Charak Oath. The move was called “highly condemnable” and the order was made by the state Health Minister Ma Subramanian.

The alacrity with which the state government with all its might swooped upon Dr. A Rathnivel for the Chrakh Shapath by immediately castigating him and taking action against him. This contrasts with everything ranging from rabid anti- Hinduism, anti-Brahminism and anti-nationalism under the garb of academic freedom and free speech, while a simple modified version of the Charak Shapath has them worked up like a state emergency.

The government reportedly said that it would come up with a circular to always mandatorily use only the Hippocratic Oath. Notably, the National Medical Commission had recently recommended that the Maharishi Charak Shapath be used instead of the Hippocratic oath. The new guidelines reportedly states, “Modified Maharishi Charak Shapath is recommended when a candidate is introduced to medical education.”

The union Health Minister, Mansukh Mandaviya had stated in the Parliament that “Maharishi Charak Shapath” would be optional and not forced on medical students.

Vile mind boggling propaganda and untruths were spread in the mainstream media which acted as a shill for the DMK government to demonise the Charak Shapath. It was also alleged that the oath was taken in Sanskrit, whereas it was taken in English. Perhaps mindful of the fact that the militant Dravidianists run like headless chickens at the very mention of Hindi or Sanskrit.

Then the Dravidian party’s media fellow travellers went on an overdrive with lies claiming that the Shapath was taken on fire and by Brahmin, as the DMK/DK spin-doctors cannot sleep without finding a way to abuse Brahmins. Further lies were peddled claiming that it had a line saying that widows would be denied treatment and compulsory growing of beard. The whole media came up with bizarre fictional stories. 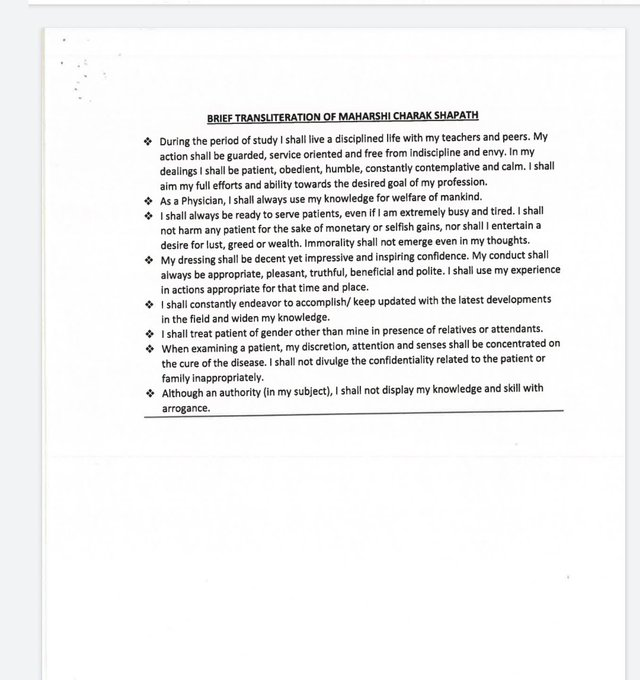 When these lies were called out as absolute fictional hate mongering by the medical students themselves in the media, they latched on to a point in the oath which says that they shall treat the patient of other gender only in the presence of their relatives or friends.

The media went on a tizzy claiming this provision as “regressive” and anti-women. The fact is even today world over, women patients are treated only in the presence of their friends or relatives as it is a precautionary step for the women’s safety. When this was pointed out, they mindlessly claimed “would you refuse treatment to a woman in emergency if she is alone ” – such juvenile arguments were put down as it is quite obvious that women would be treated in emergency, without waiting for someone known to accompany her.

The Charak Shapath taken by the students was not much different from the Hippocratic oath. Prominent political analyst, TV debater and commentator, Sumanth Raman pointed out in a series of Tweets highlighting the twisted narrative by saying that none of the TV channels put out the actual contents of the oath as it would have exposed them thoroughly. He even stated, the “Dravidian media machine never ceases to amaze me with their ability to distort facts and spread lies. They can teach a thing or two to Hindutva channels in Delhi.”

A Chennai based journalist, Lalitha Ranjani in a series of Tweets further exposed the web of lies and hypocrisy surrounding the Charak Shapath event in Madurai. She stated that the medical colleges in Tamil Nadu were informed about the change in the oath format over 2.5 months ago by the NMC. It was admitted by the Madurai Medical College VP in the story (published on Feb 15). But the Tamil Nadu government did not issue a clarification or circular to all government and private medical colleges for the past 2.5 months till April 30th clarifying its stand over the issue.

Lalitha pertinently questioned why did not the state Health Minister and Director of Medical Education issue all circulars to colleges in February that they are sticking to the Hippocratic Oath and not going to change to the Charak Shapath as per the new NMC guidelines. Usually the fresh batch of MBBS students take their Hippocratic Oath during the White Coat Ceremony that is held on the Induction Day, i.e. the very first day they join the college. This year there was a delay in the MBBS admission due to the NEET case in the Supreme Court, hence the White Coat Ceremony was held much later.

The pertinent question here was how could the Dean of Medical College be made a scapegoat, harassed and divested of his official position as he did not violate any order of the state government when he conducted the oath taking ceremony with Charak Shapath.

Notably, other government medical colleges in Thiruvarur, Villupuram, Namakkal, Dindigul, Kanyakumari, Ramanathapuram, Chengelpet districts and several other private medical colleges too took their oath with Charak Shapath. The Hindu tradition hating TN government woke up to this fact only on April 30th. The government and its media partners went on a frenzy against Charak Shapath and immediately removed the Madurai Medical College Dean from his position, only after a backlash on Twitter and later protest by Government Doctors Association, on 04.05.2022, Dr. A Ratinavel has been reinstated as the Dean of the Madurai Medical College.

The 300BC born Acharya Charak, whose Charak Samhita is the foundation for the ancient knowledge system of medicine and holistic health contained in the Ayurveda. The Charak Shapath is an oath to initiate a person to dedicate for the service of humankind with the ethical practice of medicine. India has been even after independence following the same old colonial system of Hippocratic oath, an ethical code owing its allegiance to ancient Greek physician, Hippocrates.

It is high time Bharat adopts the Charak Shapath based on very sound principles of ethics considering that medical science development in the west has been highly questionable and macabre, to say the least. Western anatomists have historically, much like the character Jekyll and Hyde, preyed on poor men, women and children; depended on illegal means such as grave robbing, body snatching and even murder for human bodies for dissection to develop the science of medicine and surgery through crude immoral means. Bharat was highly developed in the field of medicine and surgery from ancient times.  Sushruta, an ancient Indian physician is well known as the “Father of Surgery, Plastic Surgery and Brain Surgery” . He invented and developed highly sophisticated surgical instruments and procedures. His work Sushruta Samhita is one of the oldest texts in the world on plastic surgery and is very highly regarded.

The ideological leanings of the ruling DMK/DK government is so inherently anti-Hindu, colonized and slavish that it takes more pride in the alien English or the Arabic-Urdu languages which is so opposed to the Tamil culture, but would not try to even adopt Sanskrit which has so much in common with Tamil. Recently it has also banned the annual 500 year old Pattinam Pravesam festival of Dharmapuram Adheenam in Mayiladuthurai. In this scenario it is not surprising that it blocked a good initiative of using the Charak Shapath commemorating our ancient tradition of healing of thousands of years.

52,629 total views In the din of the Supreme Court verdict upholding 10%