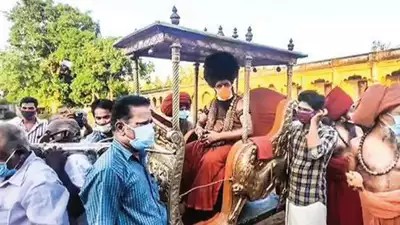 The DMK government under Stalin’s leadership has been consistently suppressing religious rights of Hindus in Tamil Nadu ever since it came to power in May last year. In its latest anti-Hindu move, the DMK government has brazenly banned the centuries old tradition of Pattina Pravesam of the legendary Saivite Dharmapuram Adheenam Math in Mayiladuthurai, Tamil Nadu. Pattina Pravesam, literally means entry of the Guru in his Pattinam or city is more than 500 years old tradition. This ritual is practised not only in Dharmapuram Adheenam but also in Thiruvaduthurai Adheenam.It is a ten day long spiritual festival where the Guru is venerated as Bhagwan, in fact in Vedic traditions devotion to Guru comes before one’s dedication to Bhagwan. In this festival, the devotees place their Guru on a palanquin and carry him in a joyous celebration as a mark of respect to the Guru. The devotees who carry the palanquin of the Guru hail from across all Jatis and do so voluntarily and joyously. Far from any compulsion, every devotee of the Matham considers it as his privilege to participate in the festival by carrying the Guru to celebrate and venerate his piety in Vedic Saivite traditions..

The palanquin bearers reside in the Adheenam Muth.. The disciples of Adheenam will also carry the ark and they hold it as a matter of pride and all devotees across Tamil Nadu and beyond attend this festival. The devotees do not think of the Adheenam priests as human beings, but as their mother, father, guru and deity.

This year, on 22.5.2022, the District Revenue Department reportedly banned this festival slated on  the 8th of May at the Dharmapuram Aadheenam Pallak. For centuries this festival has been observed without any breakage for centuries together. Even during British rule, this festival of carrying the Adheenam in the palanquin was never banned.

The district revenue department’s ban on the festival in Dharmapuram Adheenam Pallak has caused grief, anguish and fierce opposition not only among the local people, but has created a pan Hindu uproar across Tamil Nadu. Aware of the government’s ban, the 72 palanquin bearers who have been living in Adheenam Math for so many years and look forward to this festival are aggrieved. They have petitioned the government to lift the ban on the age-old tradition. Dharmapuri Adheenam has donated 60 acres of land to the government to build hospitals, police stations, colleges and government offices.

The unassailable fundamental right to freedom of religion under Articles 25 and 26 of the Constitution of India, protects the Dharmapuram Adheenam Pattina Pravesam festival and any ban on it is illegal and unsustainable in any court of law..

The present DMK government has been openly attacking Hinduism, Hindus, temples and Hindu customs. They have demolished almost 260 temples across Tamilnadu since they assumed power. They have occupied temple lands and taken over temple properties. They have driven away the traditional archakas from.the temples and placed their half baked archakas by playing caste politics and using muscle and money power.

The DMK government was upset with the Governor meeting the Adheenam and waiting for an opportunity to harass the Adheenam out of vendetta. In spite of the Adheenam.praising the present government as spiritual one, the DMK government has shown its true colour of being an enemy of Hjndus by banning the festival. They banned the tradition by preposterously claiming the practice is against human rights, in fact the contrary is true.

The attack on the Adheenam is mainly because the institution has stood like a bulwark against the Christian conversion mafia and the crypto-Christians who in the 1980 spread fake narratives of obscene Saivism and tried to misappropriate Saivism traditions to fraudulently convert people in mass scale in Tamil Nadu.

The pontiff of the Adheenam, has issued a statement that the DMK government is threatening to take over the land and properties of the Adheenam. He urged the central government, PM Modi and Home Minister Amit Shah to intervene as he is now reportedly facing death threats from unscrupulous goonda elements of DMK/DK.

Now the other Adheenams like Thiruvadudurai and Madurai Adheenam have come in support of the festival and are standing firmly in support of Mayiladuthurai Adheenam. DMK party has never been a supporter of Hindus and especially they keep targeting Hindu festivals and gurus. Their fight is always against the deep rooted traditions of Tamil.Hindu culture. Their Dravidianist anti-Hindu ideology has always been the cause for destroying many Adheenams, Muths, gurus and saints. They systematically target and wreck the traditional systems and customs that exist in Hinduism so that it never helps the Hindus to unite and aid the Church mafia for conversion.

This case is one such which exposes the rabid anti Hindu agenda of the DMK.

Image sourced from the internet.

58,131 total views In the din of the Supreme Court verdict upholding 10%