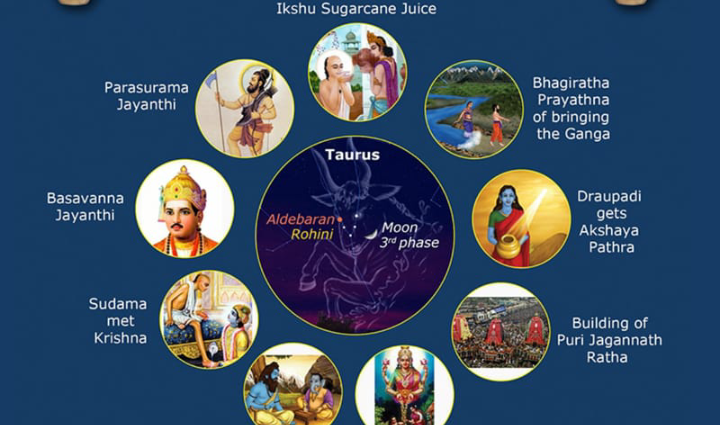 Akshaya Trithiya or Akha Teej, is a highly auspicious day which falls on the third day after Amavasya (No Moon / New moon) in the Indian calendar month of Vaishakha.

This traditional festival seems insignificant in comparison to some of the more glamorous festivals of the land.

For whatever reason this festival came into being, today Akshaya Trithiya day is being marketed as a day for buying gold, even better platinum now. Advertisements are being splashed all over urging one and all to buy gold.

Is this festival Akshaya Trithiya, a festival for buying gold or better platinum? We have also heard our parents telling us to start things on this day because anything started on this day is expected to grow.

So, what is this Akshaya Trithiya all about?

We would have heard of the phrase Akshaya Pathra, for the vessel that provided unending supply of food, during the Mahabaratha period. Draupadi has this vessel with her to feed her husbands the Pandavas, while they were in exile. It was given to her on this day by Surya Deva, the Sun God.

Kshaya is something that diminishes. Akshaya is one that never diminishes.

Why is this festival celebrated as that of limitless prosperity, Akshaya?

What is the event which gave this land this limitless prosperity, that is being commemorated as this festival?

There are quite a few reasons why this festival is celebrated, some of them being:

While all these are reasons enough to celebrate a festival, it still does not provide us any answers as to what is the limitless prosperity, that we are celebrating on this day.

In the Purana, the legends of ancient India, we have the story of Bhagiratha, an ancient king of this land belonging to the Surya Vamsa, Solar Dynasty. He was the illustrious forefather to Rama and Dasaratha, illustrious because he diverted the waters of the Ganga by his extraordinary effort, to the present day Gangetic plains.

Akshaya Trithiya is the day Bhagiratha cut through the rocks in the upper Himalaya and brought the waters of the Ganga, this side to give unending prosperity to his land, kingdom and people.

It is this event of bringing prosperity with the waters, that has been commemorated with the Akshaya Trithiya day.

Unfortunately today our thought has diverted from waters to gold and platinum.

Unending water supply is the cause of prosperity.

This is a key thought this civilisation seems to have forgotten in its hurtling haste.

Festivals like this are celebrated by us every year to recollect the yeomen efforts of our forefathers, to make our lives better in this world.

Ganga, the object of Akshaya Trithiya, today is being polluted by us continuously and is also on the verge of vanishing due to climatic changes, being hastened by our lack of concern and action.

Now, apart from appreciating their effort in providing for us a better life, the true way to honour them for their effort and surely a better way of celebrating, would be to safeguard our water sources – Ganga and all other sources, big and small, for ourselves and the future generations to come.

This would be a harbinger of everlasting prosperity.

52,723 total views In the din of the Supreme Court verdict upholding 10%