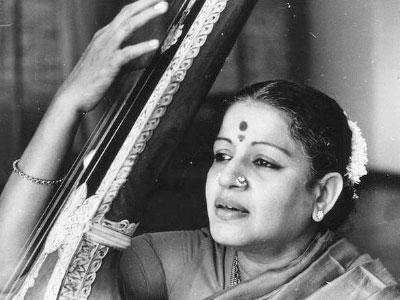 Let us today get to know the person, hearing whose voice Hindu households wake up to with the recital of Sri Venkateswara Suprabhatam, the undisputable doyen of Carnatic music, MS Subbulakshmi. It is not an exaggeration to call her voice the very manifestation of Saraswati Devi. In her lifelong dedication and devotion to music one could see the reflection of the holy saint poetess Andal, who graced this ephemeral world over a thousand years ago.

Kunjamma’, as fondly called by her family, was born on 16th September 1916 at Madurai in Tamil Nadu to write a destiny of her own identity, became the ‘Queen’ of Carnatic music, carried the fame of India to stand at the pedestal of eminence at the Global arena and earned herself an inevitable, indominable place in History.

Kunjamma’s mother was Shanmugavadivu – a Devadasi. The music this young girl learnt from her mother who was herself a Veena player became a blessing as she grew up.

The young Kunjamma stepped into the stage of Carnatic music and began giving her performances with the name of her birthplace and that of her mother prefixed to her name to be called Madurai Shanmugavadivu Subbulakshmi. She is popularly known as M.S.Subbulakshmi or simply M.S.

Goddess Saraswathi graced M.S.Subbulakshmi with a bold mellifluous ethereal vocal capacity to sing to an enthralled audience even as an eleven-year-old child. She was able to mesmerize the entire audience with her flawless singing skill and stunning voice quality. Starting from the holy Temple stage to that of London Carnegie Hall and beyond, Subbulakshmi’s singing left the listeners spellbound that the performance hall be filled with applause and appreciations.

In 1940, Thiyagaraja Sadasivam Iyer who was a journalist, a cultural artist and a freedom fighter, married M.S.Subbulakshmi after the death of his first wife Abithakuchambal who died leaving behind two daughters.

In 1966, this ‘Nightingale of Music’ was invited by the United Nations to give her performance at cultural event of the UN General Assembly. This prestigious invitation is forwarded to only such experts whose work is in the exemplary category.

M.S.Subbulakshmi dedicated herself selflessly to the cause of Music that her perseverance, practices and assimilation were so intense and dedicated that she was able to bring a sort of divinity in the songs she sang. She was successful in arousing the feel of bhakti in the devotees who listened to her bhajans.

M.S’s ‘Venkatesa Suprabhatham’, ‘Vishnu Sahasranamam’, Meera’s Bhajan ‘Hari tum haro’, and the song ‘Kurai ondrum illai marai Moorthy Kanna’ are a few notable of the numerous songs she had sung and the audio recordings of which are commonly preferred and played at Temples and households.

During the fight for Indian Independence, M.S.Subbulakshmi was invited by Mahatma Gandhi to the Sabarmati Ashram to sing bhajans for the mass who gathered for the struggle for freedom. Her songs like ‘Vaishnava janato’ largely helped to strengthen the deep conscious spiritual stability of realising the Divinity of Bharat Mata and balance it with the emotional urge to release Bharat Bhoomi from the captivity of Britishers and blend it with the physical stamina to protest firmly to force the exit of the Englishmen.

During the period of Indian Independence, M.S.Subbulakshmi was a popular voice in India that contributed in not only holding the protestors undispersed in the protest arena but also paved way to bridge the South with the North. In North India, to people who were used to hearing only Hindustani music, she gave them to the opportunity to listen to and appreciate the South Indian Classical form of music too. Further, she also enthused the audience with her display of expertise in Hindustani music which she professionally acquired from Pandit Narayana Rao. Thereby, like how the mixed concerts of Hindustani Sangeet of the North and the Carnatic Music of the South when performed in the same stage delights the audience and enhances the ambiance of the auditorium, this Singer was able to establish the cohesion of the diversities of the Sanathana Bhoomi and the importance to walk in cohesion in order to attain the unified divine cause of Indian independence.

M.S. Subbulakshmi turned out to be an ethereal voice that reverberated not only in India but also internationally. This great legend who lived to sing the glory of the Almighty, breathed her last on 11th December 2004 and left no heir of her own to claim the legacy which she imbibed through her devotion to Music but left the treasure of songs for all of us to own and cherish. She finds her memorial in the exalted seat of reverence in the hearts of people and the golden pages of history. Forever would the name and voice of Madurai Shanmugavadivu Subbulakshmi remain as the pride of Tamil Nadu, the asset of Bharat in the universe of Music.

58,115 total views In the din of the Supreme Court verdict upholding 10%