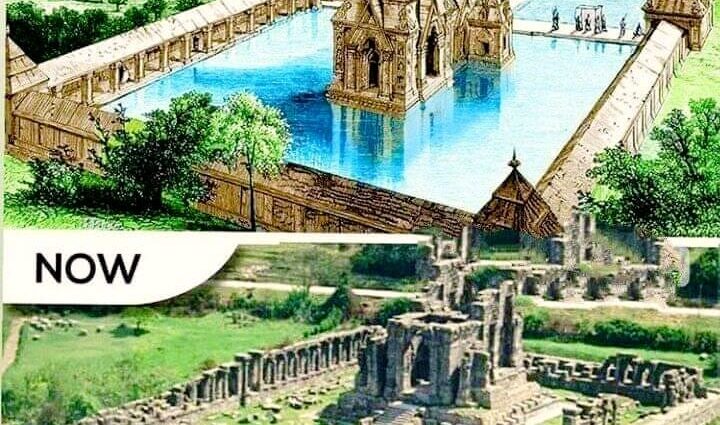 Sometime in the mid-8th century, Arabs under governor Junaid from Sindh attacked Kashmir, however, powerful king Lalitadtiya squarely defeated them. However, as would happen numerous times in the future, Hindu kings did not take the battle to its natural end and let them go scot-free. This behaviour encouraged Junaid to attack Kashmir repeatedly but was unable to succeed. King Lalitadtiya is believed to be the ablest ruler of Kashmir. Not only was he a great administrator, but also a great patron of Kashmiri Hindu Art.

In 1015-16, Mahmud Ghazni attacked Kashmir when King Trilochanpal took refuge in Kashmir. Mahmud decided to teach him a lesson by sending an advance raid army. At the time, Kashmir was ruled by Lohara king Samgrāmarāja, who decided to support Trilochanpal with his army. Given the history of meek defence by Hindu kings in the past, Mahmud was of the opinion that the advance party would be able to trounce them but was proved wrong this time. After the advance party’s defeat, Ghazni came to reinforce the party. He laid siege to the Loharkot fort for a month. Meanwhile, winter set in and snowfall started disrupting the famed communication of Mahmud. His ghazis were not prepared for the cold winters and many of them perished. He finally had to give up to avoid further casualties. This failed mission kept rankling him and he decided to invade Kashmir yet again after a few years in 1021. However, this plan also had to be aborted due to sudden bad weather. Kashmir was having a sunny day by the stroke of luck.

Unfortunately, the successors of Samgrāmarāja did not prove to be too worthy. Suhadeva, the last king of the dynasty, was unpopular and his kingdom remained mired in corruption and debts.

During Suhadeva’s reign, three foreigners and an invader streamed into the valley who would be instrumental in changing the course of its history. The first to come was a Turk leader, Shah Mir, who reached Kashmir in 1313. He was a descendant of Turks who became inhabitants of Swat valley (now in Pakistan) during the past few centuries after capturing it. Unlike other Turks, he did not come invading, though the goal remained the same. He joined the king’s durbar and rose to the position of a minister by virtue of his sheer talent.

During 1315-20 CE, though the exact year is not known, second foreigner Rinchan, a Buddhist prince from Ladakh, revolted against the ruler of Ladakh, who happened to be his uncle. Rinchan was defeated soundly and was forced to flee to Kashmir. Suhadeva subsequently gave him asylum and, due to his abilities, had a meteoric rise in the darbar. He soon became a powerful minister in the darbar. In this episode, Rinchan was immensely helped by the then prime minister of Kashmir Ramchandra. In the meantime, he became good friends with his colleague Shah Mir, a minister at that time.

Rinchan was a Buddhist, but born in a low caste. To be in the good books of king Suhadeva and strengthen his political base, he wanted to embrace Hinduism. At the time, Shaivism was the dominant sect of Hinduism in Kashmir. Therefore, he approached Devaswami, the religious head of the Shaivas, for entry into the Hindu religion. However, Devaswami refused to accept Rinchan in the Hindu fold owing to his birth in a lower caste. This insult made Rinchan disheartened and he swore revenge on these arrogant Hindu priests. This event was the turning point in the history of Kashmir when its fortunes suddenly went south. Kashmir was never going to be peaceful again because of the folly of a priest.

Somehow, Hindus always have a problem in inducting people from other faiths or even in re-conversion.

In 1320, a Turk named Dulucha (Zulcha) Khan raided Kashmir with 70,000 ghazis. Suhadeva tried to counter him, but due to his unpopularity, even his army did not support him. Suhadeva then fled cowardly to the city of Kishtwar. Zulcha plundered and looted the Kashmir valley, enslaving 50,000 Hindus. It was this invasion that led Kashmir into a free fall of anarchy, violence and forced conversion.

After king Suhadeva fled and Zulcha left the Valley, there was anarchy and misery all around and in this situation, Rinchan sensed a rare opportunity coming his way. He sent a posse of army men in the guise of traders, which took the Kashmir army by surprise. In the melee, his mentor, Prime Minister Ramchandra, was murdered and Rinchan gleefully usurped the throne of Kashmir at the end of 1320.

Rinchan married Ramachandra’s daughter Kota Rani and made his brother Ravanchandra the army commander to show his assimilation into Kashmir society. During Suhadeva’s reign, the third foreigner, Bulbul Shah, a Sufi preacher, came to Kashmir to preach Islam. He influenced Rinchan – who was anyway demoralized with both Buddhism and Hinduism – to convert to Islam. Hindus and Buddhists were not supporting him and he thought it prudent to convert to Islam to garner the support of the few Muslims. Subsequently, 10,000 of his subjects, along with his dear brother-in-law Ravanchandra, converted to Islam. He took the title of Sultan and adopted the Muslim name ‘Sadruddin Shah,’ becoming the first Muslim king of Kashmir. Taking the cue from the king, many Hindus and Buddhists started converting to Islam. Hindus also began to be prosecuted under the advice of Sufi Bulbul Shah. His rebel ministers murdered Rinchan in 1323. He had already entrusted his son Haider Shah to the care of his reliable friend Shah Mir.

Death was staring Hindus in their eyes now.

After the murder of Rinchan, Udayanadeva, the brother of Suhadeva, became the king after emerging as the most consensus leader. He married Kota Rani to gain the acceptance of the people. As the Islamic juggernaut was rolling furiously, she agreed to marry to stem the Islamic flow and to ensure that Muslims did not usurp the power and that Hinduism survived in the Valley. However, he could not perform his royal duties well, and Kota Rani became the de facto leader. Seeing the perilous situation in Kashmir, a Turk named Achala attacked the Valley. Udayanadeva, like his brother, fled at the first opportunity. Yet, the army under the leadership of Kota Rani was able to ward off the attack successfully. She became the queen of Kashmir in his place and proved to be a competent leader and administrator. Srinagar used to be ravaged by the floods in the monsoon. She got a canal constructed in Srinagar to keep the floods at bay, named Kute Kol after her.

Shah Mir gained immense popularity in this entire melee when he lent his support to Kota Rani in defending Kashmir against Turk Invader Achala. The queen rewarded Shah Mir by appointing his two sons, Jamshed and Allauddin, as ministers. Unknown to the queen was a significant conspiracy being hatched by Shah Mir to dethrone Kota. Shah was not able to digest being ruled by a woman and a Hindu. When she got wind of his ambitions, she shifted her capital to Andarkot from Srinagar. She also made his trusted advisor Bhatta Bhikshana, the prime minister of Kashmir, to thwart Shah’s evil designs. This move made Shah Mir angry and gave him a strong reason to snatch the throne. One day, he feigned sickness to take his conspiracy to the logical end. Kota sent Bhatta Bhikshana to enquire about his health. Shah Mir and his soldiers had already laid the elaborate trap for him. Bhatta’s bodyguards were engaged deliberately in conversation with the Shah’s bodyguards outside his house. As soon as Bhatta was ushered into the Turk’s chamber, he was killed mercilessly by the Shah. Kota was enraged hearing this news but was prevented from taking instant revenge by her ministers. It was going to be a crucial mistake for her, her family and Kashmir.

Emboldened Shah Mir asked Kota to marry him, but she promptly refused. Shah Mir could not take the insult and attacked the queen’s palace in Andarkot. He laid the siege on the castle. Observing that the queen was outnumbered severely, most of her soldiers defected to Shah Mir to avoid certain death. Kota was then left with no other option but to surrender. She offered to marry him; however, her marriage proposal was rejected this time and she along with her two sons were captured and imprisoned, where they died miserably.

She was the worthiest of all women rulers of India. Queen Didda and Sugandha were the two others who ruled Kashmir earlier. She used both tact and bravery to keep the Hindus safe in Kashmir; her multiple marriages amply indicate this. Barring one mistake of letting Shah Mir go scot-free, her reign was a model administration. In pre-Islamic Kashmir, women had almost equal rights and enjoyed much freedom, which they would lose.

Shah Mir ascended the throne in 1339. She paid with her life for not understanding the treachery of Shah Mir. He founded the Shahmiri dynasty that ruled until 1561 for the next two centuries. There was a sudden downturn in the peaceful political environment as Muslims were ruling Kashmir for the first time. Top positions in the government were being allotted to the members of his community only, and most of the funds were being allocated towards the welfare of Muslims only. These forces induced and forced people to switch over to Islam. Kashmir’s demography was changing rapidly.

Earlier Suhadeva committed grave mistakes by giving a whole town to Shah Mir for sustenance and making traitor Rinchan the minister. These two gentlemen, along with Bulbul Shah, did what even Mahmud Ghazni could not do. The trio repaid the generosity of Hindus with the utmost possible deceit. Though Shah Mir and Rinchan came as refugees, the end result remained the same—plunder, loot, rape, conversions and slaughter. The attack of Zulcha and Achala created conditions in which people like Rinchan and Shah Mir thrived. The Turks’ attack destroyed the social fabric of ancient Kashmiri society.

Mir Sayyid Ali Hamadani, a particularly intolerant and fanatic man from Persia, streamed in Kashmir in 1372, along with 700 followers. His only goal was to implement Sharia in the valley, in which he was more than successful. it was Mir Syed Ali Hamadani who established Islam in Kashmir.

The Hindu era was finished forever in Kashmir, like elsewhere in North India. Whatever values Kashmiri Hindus cherished would be turned to dust. From now on, only the death of dance would happen.

You may buy his books at the following links:

53,023 total views In the din of the Supreme Court verdict upholding 10%