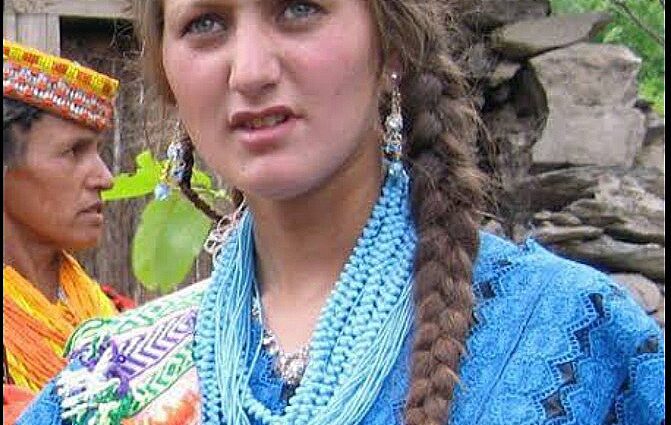 The smallest ethnic and Dharmic community of Pakistan is fighting for the survival of its culture and religious identity, in the face of religious extremism, forced conversion, migration, and climate change. Are we going to allow this rich culture to vanish from the pluralistic land of Akhand Bharat?

WHO ARE THE KALASH?
The term ‘Kalash’ is used to refer to many distinct people including the Väi, the Čima-nišei, the Vântä, plus the Ashkun- and Tregami-speakers.The Kalash are considered to be an indigenous people of Asia, with their ancestors migrating to Chitral valley from another location possibly further south,which the Kalash call “Tsiyam” in their folk songs and epics.Some of the Kalash traditions consider the various Kalash people to have been migrants or refugees.They are also considered by some to have been descendants of Gandhari people.The Kalasha language, also known as Kalasha-mun & Its closest relative is the neighbouring Khowar language.

Kalasha women usually wear long black robes, often embroidered with cowrie shells. For this reason, they are known by Muslims in Chitral as “the Black Kafirs”.Men have adopted the Pakistani shalwar kameez, while children wear small versions of adult clothing after the age of four.

The three main festivals of the Kalash are the Chilam Joshi in middle of May, the Uchau in autumn, and the Caumus in midwinter. The pastoral god Sorizan protects the herds in Fall and Winter and is thanked at the winter festival, while Goshidai does so until the Pul festival and is thanked at the Joshi festival in spring. Joshi is celebrated at the end of May each year.

The most important Kalash festival is the Chawmos which is celebrated for two weeks at winner solstice, at the beginning of the month chawmos mastruk. It marks the end of the year’s fieldwork and harvest. It involves much music, dancing, and goats killed for consumption as food. It is dedicated to the god Balimain who is believed to visit from the mythical homeland of the Kalash, Tsyam , for the duration of the feast.

FORCED CONVERSION OF KALASH PEOPLE OF NURISTAN
The Kalash people live primarily in the Kalash Valley, Chitral District, Khyber Pakhtunkhwa Province of Pakistan. Chitral District is connected to Nuristan, a province of Afghanistan. Nuristan is also known as a Kafiristan (“Land of Kaafirs” as given by muslims ), and the culture in this Afghanistani Province was similar to that of the Kalash.
The first historically recorded Islamic invasions of their lands were by the Ghaznavids in the 11th century, while they themselves are first attested in 1339 during Timur’s invasions. Nuristan had been forcibly converted to Islam in 1895–96.
People of Kafiristan were converted to Islam in 1890’s and then Kafiristan became Nuristan.

CURRENT STATUS OF KALASH PEOPLE
Chitral District is divided into two major ethnic communities, Kho and Kalash. The Kho’s are Sunni Muslim and Ismaili Muslims. The Kalash follow their traditions and belief systems which are too close to Sanatan vedic samskriti. In the 1900’s the Kalash tribe was a majority in Chitral District. But the demographic has got inverted now.Only around 4,000 people belonging to the Kalash tribe are living in the Valley. Now the majority have become a minority. Are we allowing them to vanish? Will the Chitral Kalash become the new Nuristanis?

In recent years, the Kalash in Chitral have been threatened by the Taliban, and have borne the brunt of forced conversion, migration, and climate change. Since, 2010 the people of all three Kalash Valleys (Bumburet, Rumbur and Birir Valleys) have been under growing pressure of floods as well. With hardship they restore their lives in a year after the floods, but are again and again struck and hit by destructive flooding. The source of the problem is understood to lie in the high pastures, where hundreds of goats and sheep trigger floods, the end result of hundreds of thousands of tiny hooves.

Climate change has simply compounded other problems that the Kalash have faced recently, as migrants have moved into their valleys. Some of these migrants are brainwashing the Kalash people. There have been many conversions to Islam in 2015.

According to the news published in Daily mail UK, around 100 people from Kalash have converted to Islam in the past few years.

A few years ago hundreds of Muslims clashed with members of Kalash tribe in Chitral in June 2016, after a teenager claimed she was forced to convert to Islam. That was not first such incident either. Tribe members have been facing threats and have been attacked by the Taliban for many years now.

In September 2009, the Taliban kidnapped the last Greek volunteer, Mr. Athanassious Lehraous; he was part of a team from Greece helping the Kalashis re-build their traditional structures. Mr. Lehraous was released after around eight months in Taliban captivity. No other Greek volunteer has come to the Valleys ever since.

In August 2012, militants came from Nuristan Province of Afghanistan, sneaked into the pasture land of Bumburet Valley, killed a shepherd from the Kalash community, and took away a herd of 200 goats.

And, in 2014, a video emerged wherein the Tehreek-e-Taliban Pakistan (TTP) announced an armed struggle against the Kalash, calling on Sunnis to support their cause.

Consequently, in 2014, a three judge bench of the Supreme Court, headed by Chief Justice Tasaduq Hussain Jillani took notice of the news reports that the indigenous Kalash community was under threat to convert or face violent consequences.

The Khyber Pakhtunkhwa government revealed before the Supreme Court that nearly 3,500 inhabitants of Kalash Valley in Chitral District have faced death threat from militants.And, these threats and attacks have not stopped.

In August 2016, armed militants from Afghanistan’s remote Province, Nuristan, attacked shepherds in the high altitude pastures of Kalash Valleys in three separate incidents. In August, on a pasture in Bumburet Valley, the outsiders stole around 400 animals and killed two Kalash shepherds who resisted the attack.

For the Kalash, who survive on goats and goat milk during the long winter months, such attacks can be a massive setback. It is estimated that militants have stolen around 2,500 goats and sheep in such attacks. Livestock also plays an important role in Kalash festivals, which are a part of their unique culture.

With the help of governmental overseeing of the matter, the attacks have continued without hindrance. The State has not taken adequate measures to protect and provide security to this indigenous community to preserve their rich culture from militancy, forced conversion, and natural disasters.

Due to such brutal oppression by extremism & Bureaucratic ignorance, future of Kalash tribe seems bleak.

58,111 total views In the din of the Supreme Court verdict upholding 10%