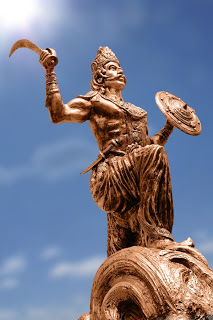 In the history of Bharat’s fight against the British rule, freedom fighter Veeran Azhagumuthu Kone (1728 – 1757) may be called the first freedom fighter and martyr of Tamil Nadu who boldly opposed the rule of the foreigners and vehemently denied subjugation to the British orders by refusing to pay any tax. Even as he was tied to the canon and blown to pieces by the British forces, his loyalty to the Ettayapuram King and his devotion to the motherland stood firm and unshaken, immortalising the true spirit of a nationalist leader.

Not many sources are available regarding this freedom fighter but folklores continued to sing his praises across centuries which motivated historians in the past few decades to search for sources that give more facts of this less known, unsung warrior of the Indian Peninsula and record his valour, loyalty and patriotism.

Azhagumuthu Kone’s forefathers were ancient residents of Aayarpaadi and Vanagapadi situated on the banks of the Palar River. Several of his ancestors served as guards, soldiers, and commanders in the army of the Chola kings.

Alagumuthu’s father died in the Hanumanthakudi battle in 1750. Soon, in the same year, at the age of 22, Freedom Fighter Azhagumuthu became the King of Kattalankulam. His paternal uncle Chinna Azhagumuthu was his aide.

On 26th August 1751, Robert Clive headed an army of 500 soldiers and went from Chennai to Arcot and captured Arcot.

Due to frequent wars between French and English, the British funds depleted. As a result, they decided to collect tax. In this effort, in order to collect tax from Arcot Nawab and his Palayankarars (polygars), the East India Company sent a troop of 500 European soldiers, 2000 native soldiers headed by Khan Sahib, and Arcot Nawab Muhammed Ali’s brother Mabus Khan under the commandership of Colonel Alexander Heran.

This troop left from Trichy towards the South in February 1755. When the troops arrived at Dindigul, Dindigul Lakshmana Nayakar gave the amount asked by Heran and bowed before him. Ramanathapuram Senapathy gave two Ports to the English and surrendered. Likewise, several chieftains submitted the demands of the British.

By 1750, the British East India Company had established its control over Tamil Nadu. The Arcot Nawab who was bankrupt in debt had to hand over the right to collect taxes to the British in return for some loan. In 1755, the Company started directly collecting the taxes from the Palayakarars (Polygars) of the Tirunelveli region. Khan Sahib was appointed by the English as the Commander of Madurai and Tirunelveli areas to collect taxes from the Palayakarars of these regions. They sent notice to Ettayapuram also asking to pay the taxes.

Consequently, Colonel Heran and Khan Sahib who were camping at Ellainayakanpatti, on the advice of Kovilpatti Vaithiyalinga Mudhaliyar, came to Ettayapuram to collect taxes. Now, stationed at the Eastern gate of the Ettayapuram Fort, they informed Jagaveeraraam Ettayappar of their purpose of coming. The Ettappa King refused to pay tax.

Seeing an opportunity, Bhoothalaipuram Ettaya told Khan Sahib that if he (Khan Sahib) made him the King of Ettayapuram, he would pay the taxes.

The English artillery attacked the Ettayapuram Fort. Hearing this, Freedom Fighter Azhagumuthu Kone came with his army and fought fiercely against Khan Sahib’s troop. The British army destroyed the Temple of Lord Shiva and the Poosai Mandapam in the East. When they were going to destroy the Perumal Temple, Azhagumuthu’s warriors headed by his paternal uncle Chinna Alagumuthu prevented them. Chinna Azhagumuthu was shot dead by hidden soldiers of the enemy’s troop.

Meanwhile, as the defender of the Ettayappa King, Azhagumuthu continued fighting at the Melavasal – the Main Entrance against the British force. When he heard that the Company’s army was gaining control over the Fort, Azhagumuthu secretly rescued Jagaveera Ettappa Naickar and his warriors from the South gate and sent them to a safe abode at Perunaalikadu.

Khan Sahib captured Ettayapuram. In April 1755, he declared Bhoothalaipuram Ettaya as the King of Ettayapuram. He collected the tax amount from the newly crowned king and left Ettayapuram for Tirunelveli with the war prisoners.

Bhoothalaipuram Ettaya, in due course of time, could not pay the taxes. Seeing the opportunity, Kurumalai Durai, who wanted to become the king of Ettayapuram, expressed his wish to Khan Sahib’s friend Vembathoor Siva Shankaran Pillai.

When Khan Sahib came to know about the crowning of Venkateshwara Ettayappar, he felt highly insulted and got angry with Alagumuthu Kone.

In order to retrieve Ettayapuram Fort, Alagumuthu began to gather an army. He summoned warriors of the Bethanayakanoor region, trained them and merged them with his army. He thus created a huge army. He divided it into two divisions. One troop was led by Venkateshwara Ettayappar and the other army was led by Azhagumuthu Kone himself. Both of them left with their respective armies in two different directions towards the Ettayapuram Fort.

The troop led by Azhagumuthu Kone halted at night at the Bethanayakanoor Fort to take rest. Having spied this, Siva Shankaran Pillai informed Khan Sahib and told him that it is the right time to attack them. He also incited Khan Sahib that if he does not destroy Azhagumuthu, not only will Ettayapuram be taken away from the hands of the English but also will give the guts to the other Palayakarars who will also start rebelling against payment of taxes. He added further that in order to revolt against Khan Sahib’s power, Alagumuthu may gather all others.

Realising the threat due to Azhagumuthu and the insult he cast on Khan Sahib by crowning Venkateshwara Ettayappar, Khan Sahib decided to assault Alagumuthu’s army that night itself. Khan Sahib surrounded the Bethanayakanoor Fort and suddenly attacked Azhagumuthu’s soldiers who were in deep sleep. Unable to respond to the sudden attack, several warriors of Azhagumuthu were killed and 255 others including Alagumuthu were held captive.

Khan Sahib asked the captives – Azhagumuthu and his warriors, the whereabouts of Ettayapuram King. He asked them to beg pardon and agree to pay the taxes. But, none of the 255 captives agreed to bow before Khan Sahib. Instead, Alagumuthu Kone roared saying, “In order to safeguard the honour of our Motherland, we are ready to accept death”. Alagumuthu’s patriotic conviction and fierce determination made Khan Sahib tremble. Hence, Khan Sahib caused severe tortures on Azhagumuthu Kone and his captive-warriors.

As a punishment for not obeying the orders of the British, Khan Sahib cut the right hand of all the 248 captive soldiers. The remaining seven of them – Alagumuthu Kone, Kechilanan Servai, Venkateswara Rettu Servai, Muthalagu Servai, Parivaram Muthirulan, his brother Segaveera Rettulakshmanan, and Thalaikattupuram Mayilupillai were tied to the mouth of the canon and shot. This brutal barbaric killing happened in the intervening night of Friday and early dawn of Saturday on 18th November, 1757.

On 26th December, 2015, the Government of India released a Postal Stamp as a tribute to Freedom Fighter Martyr Azhagumuthu Kone. Every year on July 11th, the government of Tamil Nadu conducts pooja ceremony for Azhagumuthu Kone in Toothukudi to commemorate his unparalleled valour.

About the author – Dr. M. Vijaya is an academician, author, columnist and social worker. She has rendered almost 30 years of service to the welfare and upliftment of the society through her selfless social service and Human Rights awareness campaigns.

52,665 total views In the din of the Supreme Court verdict upholding 10%