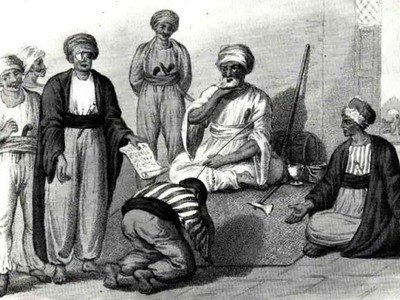 By: Vineet Saxena
In: Opinion

Are you a Dhimmi? Who is a Dhimmi? Has there been anything remotely resembling a Dhimmi or Zimmi anytime or in any place in the world history before arrival of Islam?

Who is a DHIMMI?

Dhimmī or ahl aḏ-ḏimmah/dhimmah “the people of the covenant” is a historical term for non-Muslims living in an Islamic state with legal protection.

A dhimmi is a religious minority within an islamic society. What differentiates a dhimmi is the fact that he should be an ahl al qitab or people of the book. This essentially limits the title to people who follow the book – the word of a monotheistic god. Islam essentially believes that through the ages god gave his word to man through 124000 prophets but man perverted the word (written in the Qitab) and are hence inferior to the true believers – the momins.

Ahl al Qitab or Ahl e Qitab were thus given grudging permission to continue to live within islamic societies.

Historically, dhimmi status was originally applied only to Jews, Sabians (Mandaeans – now extinct) & Christians. However as the scope of islamic conquests  grew, Hindus, Sikhs Jains & Buddhists were also brought under the definition.

In 624 CE the leader of the newly formed cult had started claiming new territories and converts. This messianic leader asked the  Qainuqā’, a jewish tribe of Medina, to accept his prophetic claims. When they refused, he attacked and defeated them. On the request of one of his followers (a recent convert), the leader spares the jews but he expels them from the city. He confiscated their lands and possessions leaving them no means to survive.

625 CE, the Jewish Nad.īr tribe suffers a similar fate. The messianic leader burned down their palm groves and divided all their fields and houses among his followers.

The ‘leader’ claimed divine sanction and attacked the jewish tribe of the Quraiza. He offered the jews safety of they leave their faith and convert to his new cult. Upon refusal by the jews the angered “leader” attacked and defeated. The victorious “believers” dug trenches in the marketplace of Medina and the jews—600-900 were led forth in batches and beheaded. All the men were killed in this manner except those who chose to convert. The ‘leader’ then divided the women, children, houses and all the wealth between his followers.

By 628 CE, Treaty of Hudaibiya (Non belligerence) with the Quraysh ceased hostilities with the ‘leader’ (who was also of the Quraysh tribe). This allowed him to attack the oasis of Khaibar. This oasis was inhabited by another jewish tribe. The ‘leaders’ army attacked the unsuspecting tribe in the early morning. Their palm groves and fields were burned down. But this time the Khaibar tribe did not go down without a fight. They held on for a month and a half. Besieged on all sides the tribe agreed to a peace treaty. They surrendered under the terms of a new treaty also called the Treaty of Dhimma. According to this treaty the ‘leader’ allowed the Khaibar Jews to continue cultivating their fields, on condition that they gave him half of their produce; the victorious leader also reserved the right to break the agreement and expel them whenever he wished.

NOTE – Later, all the Jewish and Christian communities of Arabia and Hindus, Zoroastrians beyond Arabia submitted to the barbaric marauders under the terms of a dhimma similar to that granted at Khaibar.

The peasantry were expected to provide assistance and provisions to the ‘believers’ forces and pay a tribute in money or kind known as the jizya, to be distributed first to the ‘leader’ and then to his followers. In addition, they were to make available an area within their places of worship (synagogues, churches, temples) to the men of the ‘leader’ if so required by the ‘leader’s men’. In return all that the ‘leader’ was obligated to do was to respect their religious observances and to defend them.

A) Kharāj –  The rights of conquest first established at Kaibar led to the expropriation of the defeated peoples by the transfer of their lands to the Islamic community. The dhimmi retained the right to cultivate his land in exchange for the payment of a tax to the momin ruler. This tax, called kharāj, transformed the former peasant-owner into a share-cropper, who tilled his land as a tenan. Land ownership by the dhimmi (religious minority) was prohibityed by the ‘leader’. In certain rural areas, the servile character of the dhimmi’s condition worsened with the passage of time.

In 1884 Charles de Foucauld described areas in southern Morocco where the non muslim religious minorities and their families belonged body and soul to their muslim masters.

B) Jizya – The adult male dhimmi had to pay another additional tax, the jizya (declared by the ‘leader’ to be divinely sanctioned & hence applicable for all times – 9:29). According to some jurists, this poll tax was to be paid by each person individually at a humiliating public ceremony in which the dhimmi, while paying it, was struck either on the head or on the nape of the neck.

Possession of the receipt of jizya—originally a piece of paper/cloth worn humiliatingly, around the neck or a seal worn on the wrist or on the chest—enabled the dhimmi to move from place to place.

C) Other Taxes – Dhimmis also paid higher commercial rates and travel taxes than the master momins. Apart from taxation, large sums were extorted from the dhimmi communities at the ruler’s pleasure. Imprisonment and torture to extort this ‘Tax’ was a very common practice.

The DHIMMIS were and are excluded from holding any public office. They could only work the most menial, humiliating jobs that no ‘believer’ would do. The hadiths proclaim that “an infidel/kafir (non-believer in Islam) ought never be able to assert authority over a muslim”.

Note – Sometimes dhimmis did find employment under islamic rule but it often caused resentment among the people & clergy. Such dhimmis often converted to preserve their status and security

Invalidity of the Dhimmi’s Oath – A dhimmi was not allowed to give evidence against a muslim. To defend himself, the dhimmi was forced to purchase muslim witnesses at great expense. The refusal of muslim courts to accept the testimony of the dhimmi was based on hadiths which maintained that the infidels were of a perverse and mendacious character because they deliberately persisted in denying the superiority of islam.

Refusal to accept a dhimmi’s testimony was particularly serious in view of the frequent accusations against the dhimmis of having blasphemed the great leader, the faith or even the angels—an offense punishable by death. In such a case, the dhimmi was in no position to contradict the accusation in court and could save his life only by conversion to thew faith of his oppressor.

Their law (The divine book 2:178) applies the law of retaliation only between equal parties. Therefore a guilty monin’s punishment for a crime would be much less if the victim was a dhimmi. In practice if not in law, a dhimmi would often be sentenced to death if he dared to raise a hand against a momin, even if it was in legitimate self-defense.

Sometimes collective punishments would be imposed where entire community of dhimmis would be held responsible for any and all crimes (real or perceived) against the believers.

example – 1866 in Fez, when a jew wounded a momin who had tried to kill him, thirty jews were immediately wounded in retaliation.

A) Places of Worship –  The laws concerning places of worship depended on the circumstances of the conquest and terms of the treaties. The construction of new temples, churches or  monasteries was forbidden by law.

Dhimmi places of worship were not considered inviolable. They could be ransacked, burned, or demolished as acts of reprisal against the community on the pretext that members of the dhimmi have exceeded their rights (based on whims of accuser).

The momin’s places of worship were prohibited for the dhimmi and the kaffir, punishable by death of the violator or sometimes his entire community. Sometimes a dhimmi could be put to death even for the crime of passing in front of a mosque.

B) Liturgy –  The ringing of bells, the sounding of the ram’s horn (shofar), and the public exhibition of crosses, icons, banners, and other religious objects are all prohibited. Some theologians allowed religious processions of dhimmis, but only in towns where they formed the majority.

C) Persecutions and Forced Conversions – The Qur’ān forbids forced conversions, but it happened nonetheless. In 704–5, the caliph Walīd I (705–715) assembled the nobles of Armenia in the church of St. Gregory in Naxcawan and the church of Xram on the Araxis and burned them to death. Others were crucified and decapitated and their wives and children taken into captivity.

The abduction of dhimmi children for conversion to the ‘faith’  is well-known from the sixteenth century onward. As late as the early twentieth century, during the periods of the countless massacres & riots, large numbers of children were carried off and brought up as momins.

The dhimmi were not allowed to acquire land or possessions outside of their sgeregated ghettoes to which they are usually confined.

Their homes, temples or buildings both in size and appearance must be inferior to the most inferior muslim dwellings i.e. dhimmi houses must be shabbier and smaller.

“A Hindu/Christian/Jew must only appear before a Muslim in a humiliating position.”

These examples are intended to indicate the general character of a system of oppression, sanctioned by contempt and justified by the principle of inequality between believer and dhimmi. They were singled out as objects of hatred and contempt by visible signs of discrimination, they were decimated during periods of massacres, forced conversions and banishment. Sometimes it was the prosperity they had achieved through their labor or ability that aroused jealousy; oppressed and stripped of all their goods, the dhimmis often emigrated. Many dhimmis communities have been  annihilated because they were not believers hence unarmed, they could live only in a state of perpetual insecurity and contemptuous tolerance.

52,685 total views In the din of the Supreme Court verdict upholding 10%