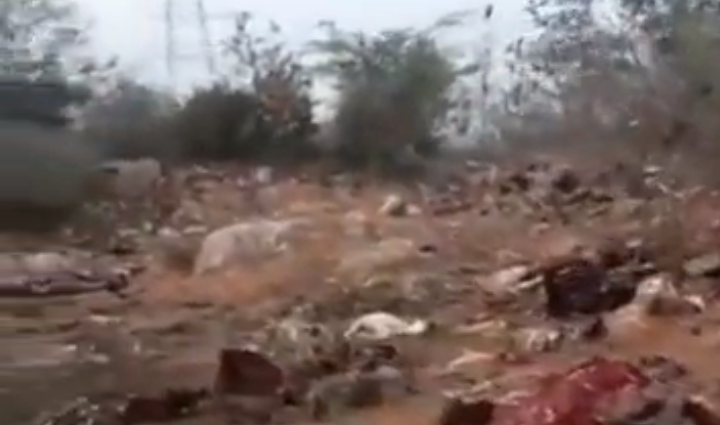 By: Gayatri N
In: News

A shocking bone chilling video has come to light purportedly showing a hillock filled with scores of dead cows carcasses, bone wastes and heaps of cow skin on the Gurgaon-Faridabad Road, Pali area in Haryana.

This video reported by a local news channel named Khabar Khas TV would shake the conscience even of the most hardened individuals who do not consider cows as sacred beings. The video of the hillock is like a horror movie play where you have gory scores of dismembered bodies of cows and even young calves lying  in the forested area of the hillock. The video showed an endless stretch of area containing denuded cow skeleton and bones dumped lying as waste after deskining the slaughtered cows.

Several mounds of cow skin could be seen all across the hillock as the  unidentified person taking the video said, no big news channel covers the blatant violation of strict anti-cow slaughter laws by reporting the deadly cow slaughter mafia operating with impunity in the area.

The person also alleged that no Hindu activists or animal rights activists claiming to care for the protection of cows have ever bothered to visit this site where thousands of cows are brutally slaughtered and deskinned for illegal leather trade. He expressed the apathy of the government and the law enforcement agencies in nabbing the culprits and curbing the brazen cow slaughter in thousands on the hillock in Haryana.

It is alleged in the video that though a FIR has been filed by the local police, no further actions have been taken on the issue. So, the place evidently continues to be used for barbarically slaughtering cows and deskinning them.

Pertinently the Haryana Gauvansh Sanrakshan and Gausamvardhan Act, 2015 was strengthened even further in 2019 to empower police to search and seize vehicles involved in transportation of cow smuggling for the purpose of slaughtering. These stringent laws are hardly implemented on the ground as evidenced from the present case.

This incident is certainly very disturbing for all Hindus who worship cows as a deity and consider her as holy. In fact during the Vedic times cow slaughter was punished with expulsion from the kingdom or death penalty due to its sacredness and the vital role of cow in the agriculture based economy. It is hoped that the law enforcement agencies and the BJP government in Haryana take immediate steps to investigate the matter and bring the culprits to justice by effectively implementing the cow protection laws.

Non-implementation of cow protection laws on the ground by law enforcement agencies forces Gaurakshaks to take proactive steps to curb cow slaughter. It is only natural that civil society reacts with Gaurakshak vigilantism when the cow slaughter mafia has a field day without facing the law. Abusing these Gaurakshaks as Goondas only reflects a deep hatred for Hindu sentiments and non-cognition of cows as an essential driving force of rural agricultural economy.

53,123 total views In the din of the Supreme Court verdict upholding 10%