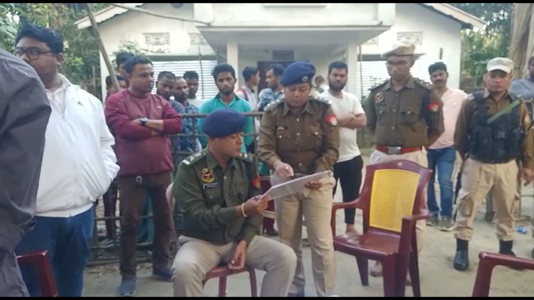 A case of land grab complaint by Hindu family against their Muslim neighbours has come to light in media reports. As per the report, a Hindu family in Assam’s Dhin area has accused Muslim community members of grabbing their land. This led to a clash between the two families in  Lahorighat, Morigaon, Assam.

The Chief Minister’s office is reported to have taken cognizance of the matter and there is increased police presence in the area to maintain peace. The Police Superintendent of the area is reportedly looking into the matter, but since the issue pertains to land the District Administration Circle Officer has taken up the case to resolve the dispute.

The SP has reportedly taken action to beef up security in the area to avoid any communal flare ups. The Circle Officer reportedly visited the area and is in the process of investigating the land ownership details, the officer would table his report and conclusion after a thorough study of the case with available documentary proofs.

It is noteworthy here that Assam suffers from decades of illegal occupation of land by illegal Bangladeshi Muslim migrants altering its demography and posing serious security threat in a border state. Islamist leaders like Baruddin Ajmal of AIUDF have been accused of facilitating illegal infiltration of Bangladeshi Muslims in Assam and aiding encroachment of Bangladeshi Muslims on Hindu Satras (Hindu monastry land) and Kaziranga National Park. Notably, Badruddin Ajamal is said to be an illegal Bangladeshi migrant and accused of destroying Assamese Hindu civilizational culture and tradition by overwhelming it with Islamic culture and demographic invasion.

The BJP government has been trying to recover encroached land from the illegal Bangladeshis by evictions and  razing down illegal settlements. The Sarbananda Sonawal government amended the Assam Land and Revenue Regulation, 1886 to empower the government to free temple properties and Satra lands under illegal encroachment; earlier the law only allowed the government to recover government lands under illegal occupation. Around 231 bighas and 6 kathas (76 acre) of Satra lands are reported to be encroached across the state. The BJP had promised in its election manifesto free illegal occupation of Temple properties and Satras by setting up a special task force for the same.

In June this year illegal Bangladeshi infiltrators were evicted from 120 Bighas of land (40 acre) owned by the Dhalpur Shiva Temple in Darrang district in Assam. The Chief Minister Hemanta Biswa Sarma, himself visited the Shiva Temple and urged the illegal occupiers of another 60 bighas of land there to voluntarily vacate.

The Hindus in Assam have started resisting illegal occupation of their lands by Islamists by lodging complaints and taking legal recourse. It is hoped that the present case of complaint by Hindu family of illegal land grab attempts by their Muslim neighbours in Morigaon is addressed.

The BJP government and Hindus of Assam have to address the dwindling demography of Hindus and rampant land grab of Hindu properties in Assam at a war footing or the day is not far away when Assam would have a Bangladeshi Muslim as its Chief Minister forcing exodus of Hindus from the land of Lachit Borphukan.

53,141 total views In the din of the Supreme Court verdict upholding 10%