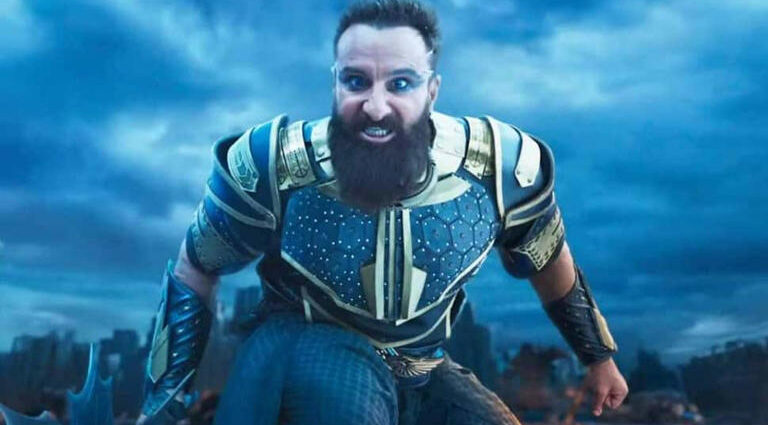 MUNTASHIR, ADIPURUSH IS ISLAMISATION OF RAMAYANA

Facing Hindu outrage in social media on release of the Adipurush trailer as another assault on Hindu sensibilities by an Islamised anti-Hindu Bollywood, Manoj Muntashir the scriptwriter of Adipurush tries to valiantly defend the Alauddin Khilji like looks of Ravana in the movie by insisting that Khilji is today’s Ravana. Although Muntashir’s assertion of Alauddin Khilji as an Islamist barbaric invader is welcome, his understanding of Ramayana and Ravana is either extremely poor or he is badly trying to sell an Islamised Ramayana to Hindus as Adipurush. Muntashir is trying to salvage a 450 Crore rupees budget movie which became an instantaneous flop even before the release of the movie with just a show of the official trailer. Muntashir’s arguments would not cut any ice as he is trying to promote an Islamic Ramayan which goes against the very spirit and soul of the holy Mahakavya.

Let us now examine all that is wrong with Adipurush.

Although Hindus have been facing an onslaught of Islamic attack for the past 1300 years, Ravana can never be depicted as an Islamist invader like Alauddin Khilji.  Ravana was an ardent Shiv Bhakta, extremely accomplished in Vedas and a very fine soldier. He composed the Shiva Tandava Stotra which is chanted even today by all Shiva Bhaktas. His only problem was excessive Kama, Krodha, Lobha, and Ahankara which led to his downfall and atrocities. Shri Rama himself asked Laxmana to pay obeisance and learn the intricacies of statecraft from a dying repentant Ravana.

Portrayal of Ravana like Alauddin Khilji is in very bad taste and a very foolish idea. Hindu Asuras cannot be compared to evil Abrahamists as Asuras can reform and repent by Tapas. When you are an Islamist there is nothing to reform – the only reform possible is to completely reject the dogmatic Islam. There is no other way of redemption.

Saif Ali Khan cast as Ravana is the biggest mistake of this film.  The trailer shows Saif as a Mughal, with blue eyes, a hipster haircut, and a long beard. Ravana was an accomplished Brahmin with Asuric character and not from the Arabian desert. Saif’s expressions, features and makeup with beard rather makes him resemble Alauddin Khilji like character which is a very far cry from the character of Ravana. Saif’s miscasting will be the primary reason for this film’s flopping. Islamic Bollywood has been keen on casting Muslims such as Saif in prominent Hindu roles to subliminally brainwash the Hindu public into having a soft spot for Islam. Saif, barely above five feet does not do the mighty powerful Ravana’s character justice.  Kriti Sanon’s Sita is taller than the troll Saif Ali as Ravana. Rumours are that Saif Ali had to be VFX-artificially shown as being taller than he is given his vertically challenged physique.  Why would Muntashir not have the common sense to suggest Om Raut, the director of the film, cast an actor who fits the role of Ravana?

The depiction of Hanuman Ji and the vaanar Sena is far worse in the trailer. Hanuman Ji is shown in tight leather vests without his Mukut and Janeu. Hanuman Ji wears red or yellow cloth, which too is symbolic spiritually and cannot be changed to idiotic leather attire to the whims and fancies of the film director. Muntashir should know Hanuman Ji flies up to the sun, the tight leather vests would be extremely incongruous and uncomfortable. Hanuman’s Kundala is missing, his lustrous curly hair has been made unkempt ugly & frizzy. Hanuman’s face is shown as dark with a sinister scowl in contrast to the golden body and glow described in Hanuman Chalisa by saint poet Tulsidas Goswami. The dark sinister looking face without Mukut, Kundala and Janeu and an Abrahamic beard without moustache of Hanuman makes  the endearing but powerful God look like a deadly Abrahamic King Kong-like ape and not the Rudra Avatara. Muntashir has failed to understand that Vanaras were not apes. The Vanara Sena of Adipurusha looks like a menacing crowd of Neanderthal hunters.

SRI RAM IS NOT ADIPURUSH

Muntashir needs to get his facts right before he embarks on writing a script for the Ramayana. First of all Sri Ram is not Adipurush he is Maryada Purushottam Ram. He is an Avatar of Bhagwan Vishnu. The title itself is demeaning and misleading. Ram depicted in Adipurush looks very dark and gloomy, the character fails to radiate the luminance and piety of the personality of Bhagwan Ram. Muntashir needs to understand Bhagwan Ram lives in the hearts of every Hindu worldwide, he symbolises the civilizational identity of Bharat. Casual, lazy treatment of Ram’s character and dubious title of the film is sloppy work at best and willy nilly deliberate sacrilege.

Sita depicted in Adipurush looks like a scantily dressed cabaret dancer and is an insult to Sita’s radiance, and beauty. Sita’s portrayal lacks the dignity of an Avatara of Devi Laxmi. Sita was very accomplished in Vedas, music, and art. She was the Shakti of Shri Rama enabling him to establish Rama Rajya and the trailer doesn’t show an ounce of the piety of Sita Maa.

Muntashir should stick to scripting low-grade Bollywood masala films. Scripting Ramayana or Mahabharata needs a lot of shraddha bhaav and creativity. It certainly is not the field of Bollywood copycats. Any Bhakta would know and visualise what Ram, Sita, Laxman, and Hanuman are when they read Hanuman Chalisa, Valmiki Ramayan, and Kamba Ramayana. Or even a read of C. Rajagopalachari’s Ramayana and Mahabharata can give one a good idea of the two Mahakavyas.

Muntashir Ji, you cannot script Ramayana after seeing Arabic teleserials  like Alif Laila and mistake it for Ramayana.  By paying homage to Islam in the supposed Hindu epic Adipurush, the director has dug a huge hole for himself which will be impossible to climb out of.  The trailer has already failed given the negative public opinion and the film too will sink as fast as it is released.

Image of Ravana from Adipurush teaser trailer sourced from internet.