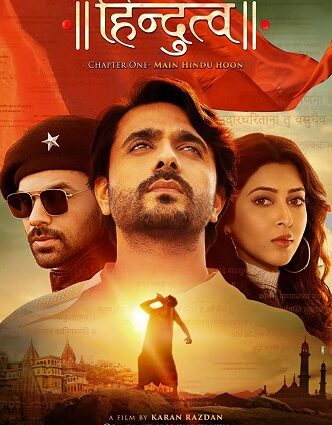 Bollywood is currently reeling under a series of abysmal flops with movies starred by the likes of Amir Khan, Ranbir Kapoor, Akshay Kumar registering huge losses in box office collection due to boycott calls by Hindu film watchers tired of obnoxious anti-Hindu content in their movies and public statements. Bollywood seems to be forced to mend its ways and be on the redemption path to save itself from total bankruptcy.

Just when the dominant anti-Hindu lobby of Bollywood, political parties and media is busy trying to draw an artificial difference between Hinduism and Hindutva to hide their hatred for Hinduism and Hindus, it is a pleasant surprise to come across the trailer of a movie titled, “Hindutva”.

The first reaction to the movie title evoked a sense of suspicion as Bollywood movies post independence since 1950s have caricatured devout Hindu characters as rioters and fundamentalists despite facing the most bloodiest of dismemberment of the country based on religion which saw over a million Hindus dead, lakhs of Hindu women raped, massive destruction of property and nearly 15 – 20 million Hindus displaced and uprooted from the land of their ancestors. While Muslim characters starting from barbaric Islamic invaders like Babur, Shahjehan, Akbar; smugglers like Kareem Lala, Haji Mastaan and even jihadi terrorists like Dawood Ibrahim have been consistently romanticized and eulogized by Bollywood.

Going by the trailer of the movie “Hindutva” it seems like a first cinematic attempt made to define Hindutva as plain and simple Hinduness which is portrayed by the director of the movie as the identity of a Hindu and essence of Bharat. The movie director, Karan Razdan seems to have turned a new leaf, sensing that Hindus have now started asserting their choices and not willing to spend their money watching movies which routinely mock and abuse their sentiments and Hindu deities.

Karan Razdan surely has come a long way from his subtle communist minded TV serial, “Rajani” which had his then wife Priya Tendulkar essaying the role of a social activist cum “modern” housewife who advocates breaking free of Hindu rituals and traditions in a very understated manner influencing Hindu psyche of regular Hindu homemakers. Priya Tendulkar’s father Vijay Tendulkar was a die hard communist credited with being a well known playwright, movie and television writer. His scripts began the trend of social, communal violence cult films like Ardh Sathya, Akrosh etc. Vijay Tendulkar is infamous for his outlandish statement on the Gujarat riots post burning to death of 59 karsevaks in Sabarmati Express by jihadis,  “If I had a pistol, I would shoot [Gujarat Chief Minister] Narendra Modi”. Funnily, Vijay Tendulkar was a champion of abolishing death penalty. Anyway, when were communists ever logical or consistent?

So, Karan Razdan certainly seems to have travelled a long journey from his communist background, Tv serial Rajani, his titillating directorial movies like Souten (the other woman), Hawas, Girlfriend etc. to “Hindutva”. Seems more like a path of personal redemption for Karan Razdan.

Coming to the movie, “Hindutva” the film trailer is out: https://fb.watch/fL37trJx1d/

The clip shows how two friends – a Hindu and a Muslim are discovering themselves and forming their identities while in college.

The trailer shows how they used to be bhai-bhai, celebrating Diwali and Eid together. Soon both begin to explore their religion and the film seems to take the audience through this journey of self-discovery which is reflected in the civilizational and political history of Bharat. The Muslim student seems to discover the good, bad, and ugly about Islam while the formerly Ishwar-Allah-Tero-Naam (IATN)-japping Hindu student seems to realise the gory history of Islamic invasions and Islamist ideology while discovering the beauty of Sanatan Dharma and embracing it with pride.

The most interesting character from the clip is apparently a deracinated, semi-woke Hindu girl who seems to undergo a reality check which results in a change of heart, and probably  leaves her Muslim boyfriend over the course of the film.  Other than the characters looking too old to be in college and the skirt which was cut too short for item effects, the film looks promising.

Those who were grateful to see more the serious and poignant, “The Kashmir Files” playing out on screen might breathe a sigh of relief to see this new film, Hindutva depicting the slow awakening of the till-now soporific Hindu.  Parents, especially those who raise young, Hindu girls need to make sure to watch this film together and have frank discussions with their children.  Make sure to watch this one on the big screen and claim your beautiful ancient roots.  When Hindu society seeks accountability for their money spent and refuses to be treated like doormats by the Bollywood film industry, we surely can bring in revolutionary changes in the influential entertainment world.  It is good to see the beginning of Gharwapasi of Indian cinema.