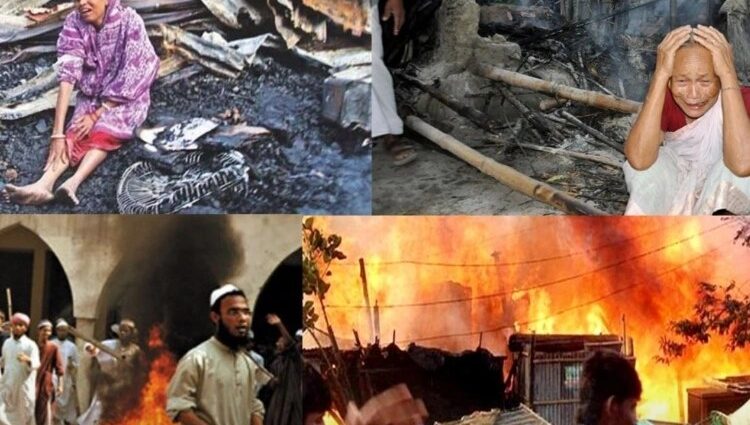 There is a continuing genocide of Hindus in Bangladesh for over 70 years now. Every year during Durga Puja the persecution peaks, last year the spate of killings, arson and destruction of Hindu Temples and homes in Bangladesh was so much rampant across Bangladesh, that it evoked uproar worldwide. This picture has not changed even now, a cursory look at the reports of Hindu torture and persecution in November 2022 is enough evidence of the continuous genocide of Hindus in Bangladesh. Throughout the month of November, there have been numerous attacks, looting, vandalism, abduction, killings, rape attempts, and forced conversions to Islam in various parts of the country on the minority Hindus and indigenous communities. The following report compiled by Sayan Dey is an attempt to list the atrocities committed against minority Hindu and indigenous communities in Bangladesh during the month of November.

On Friday, November 4, unidentified miscreants vandalised Ma Kali and Shiva vigraha by beheading them and taking them away from a puja mandap in Khamarpara village of Khansama Upazila of Dinajpur district, Bangladesh. A FIR was filed against unidentified persons for hurting religious sentiments in this incident.

Controversy arose over the question paper of the HSC Bangla First Paper exam in Bangladesh. Allegations were made that the designed question paper hurt religious sensitivities. Prominent people called it a case of religious provocation. One of the questions in this paper was, “Nepal and Gopal are two brothers. They have been in dispute over land for a long time. Despite many arbitrations, no one could resolve their dispute. No one is willing to make concessions. Now the case regarding the distribution of the land is going on in court. The younger brother, Nepal, sells a part of the land of Bhit to a Muslim named Abdul to discipline the elder brother. Abdul built a house there and started living there permanently. He sacrifices a cow in front of Nepal’s house on Eid al-Adha. This incident broke the heart of Nepal. After a few days, he went to India with his family without telling anyone.”

There was a land dispute over the land of the “Darora Sri Sri Shamshan Kali” temple in Ward No. 1 of Darora Union No. 19, Muradnagar Police Station, Comilla District, Bangladesh. The temple committee had appealed to the Comilla Deputy Commissioner, Superintendent of Police, and Muradnagar Upazila Nirbahi Officer to solve this problem. Soon after, in late night of November 5, 2022, unknown miscreants entered the temple and vandalized the vigraha of Maa Kali.

Khulna: Hindu woman beheaded after being trapped in Sex Jihad

A Hindu woman named Kavita Rani was brutally killed after being caught in the trap of sex jihad. Her dismembered body was recovered from a rented house in the Sonadanga Thana area of ​​the Khulna metropolis in Bangladesh. RAB-6 confirmed the identity of Kavita Rani on Monday (November 7). The deceased Hindu woman Kavita Rani is the daughter of Kalipad Bachar of the Kuter Bill area of ​​Satkhira Ashashuni. RAB arrested the killer Abu Bakkar in this incident.

Bangladeshi Islamists often mock India whenever they get a chance. This year also, Bangladeshi Islamists started mocking India during the Cricket World Cup. A Bangladeshi youth named Ehteshamul Imran made a Facebook post on November 10 at around 5 p.m. mocking India using a happy emoji following India’s loss to England in the semi-finals of the T20 Cricket World Cup. He wrote, “India says Chere de Ma, Kede bachi.” Lose by 10 wickets!

This time, the controversy didn’t rise for Ehteshamul’s Facebook post. In the comments of that post, a Bangladeshi Judge commented, “I got a lot of peace.” It feels good when the “Malaun” loses. Anweshan News has verified the information and found evidence that the commenter’s ID belongs to this Judge. It should be mentioned that the “Malaun” word is used by Islamists to mark and abuse the Hindu community. The word is derived from the Arabic “ملعون”, meaning “accursed” or “deprived of God’s Mercy”, and in modern times, it is used as an ethnic slur by the Islamists in West Bengal and Bangladesh region for Hindus. One can only wonder what kind of justice such judges would give to Hindus in cases before such a bigoted judge.

In Patnitola Upazila of Naogaon district of Bangladesh, the miscreants of the local Altaf gang destroyed about 60 bighas of Aman paddy farmed by tribal Hindu sharecroppers by spraying herbicides. Paddy worth about 30 lakh taka was destroyed in this incident. The affected tribal Hindu farmers were devastated due to the massive loss of paddy crops pushing them to poverty.

Unidentified miscreants attacked the Sarvajanin Shiva Mandir in the Teesta Bazar area of Gokunda Union of Lalmonirhat Sadar Upazila on 18th November. The miscreants vandalized the Shiva Linga and looted money from the donation box of the temple. Expressing their anger, the local Sanatani people demanded the arrest of the culprits.

The local Hindus said that the temple is about 200 years old. The next morning, the devotees found that the three Shiva Lingas and Trishuls of the temple had been vandalized, and the money from the donation box had been looted by unidentified miscreants. After that, when the incident came to light, local Sanatanis living gathered at the temple and staged a protest.

On Wednesday, November 16, a Hindu family was ambushed in filmy style in Dumuria, Khulna, and their homestead, kitchen, cowshed, paddy shed, and all their furniture were vandalized and looted. This incident happened like the 1971 Pakistani atrocities at the house of Bikash Nandi in Sikdarpara village of Gutudia Union of the Upazila at around 11 a.m. on Wednesday. Aranghata police station had arrested the mastermind of this incident, Tuku, from the Deyana area.

10 members of a minority Hindu family were injured in an attack by a Jubo League leader over a land dispute in Bhuyapur, Tangail district, Bangladesh. A few Vigrahas in their house were vandalized. Four of the injured Hindus were treated at Bhuyapur Upazila Health Complex. The attack took place on the house of Subhash Ghosh and Pradeep Ghosh of Ghoshpara in the Koshtapara area of the Upazila on Friday morning (18th November). Accused Jubo League leader Khorshed Alam is the former president of Gobindasi Union Jubo League, which is the political youth wing of the ruling party Awami League in Bangladesh.

Swecchasebak League leader Mizanur Rahman was caught by the locals while forcibly trying to rape a Hindu woman of the minority community in Kaliganj of the Jhenaidah district of Bangladesh. At that time, local Hindus caught him naked and tied him to a tree. After receiving the information, the police went to the spot, rescued him, and took him to the police station.

The incident took place at Daspara in Alaipur village of the Upazila around 11:30 p.m. on Sunday (November 27). In this incident, the victim, a Hindu woman, filed a case at the Kaliganj police station that night. The police arrested Mizanur Rahman in that case. The accused, Mizanur Rahman, is the son of Moksed Ali of Alaipur village in the Upazila and the former president of No. 1 Sundarpur-Durgapur Union Swecchasebak League.

Sunamganj: Hindu family ostracized by panchayat for not selling land

Nine Hindu families were evicted for not following the decision of the Panchayat of Jamalganj in the Sunamganj district of Bangladesh. These Hindu families are left homeless due to persecution by the local panchayat. The victimized Hindu families approached the police, but the police took no action on the highhanded Muslim Panchyat persecuting Hindu families. As a result, the victim, Bharat Chandra Talukdar, and his relatives are currently homeless. It was alleged that the family of Bharat Chandra Talukdar had been ostracised for not selling the land to the local panchayat.

Former Chairman of Bhaluka Upazila Parishad Golam Mostafa and his family are topmost in land grabbing of minority Hindus in Bhaluka of Mymensingh district in Bangladesh.

Victimized local minority Hindus alleged that the Mustafa family has become addicted to taking the land of the minority Hindus in various ways. Also, there are many allegations against former Upazila chairman Golam Mostafa of embezzling lakhs of takas from various poor Hindu families. Golam Mostafa is the son-in-law of the daughter of Sirajuddin Khan alias Suruj Khan, a registered Razakar of Bhaluka Upazila.

A Hindu minor girl was rescued after being abducted by Sex Jihadists. It was known that on November 27, the victim Hindu minor was abducted by local Love Jihadist Mohammad Jahangir Rahman alias Ullas. The abducted girl (15) was finally rescued with the help of Savar police and several local Hindu activists. From the copy of the FIR filed by Mrs. Karmakar, it was known that for quite some time local Love Jihadist Mohammad Jahangir Rahman was sexually harassing his daughter by stalking her and passing lewd comments. Her daughter was abducted on her way to Sri Sri Jagat Bandhu Mandir on the 27th when she did not agree to Mohammad Jahangir’s obnoxious sexual favours.

Violence against Hindus in Bangladesh is not new. However, the number of Islamist hate attacks on the Hindu community has increased recently in Bangladesh. The family of Pintu Lal Das, a minority Hindu, was forced to leave their residential address in the face of direct and indirect threats and attacks for the past 7 years. It is believed that they were forced to take refuge in India. The family of Pintu Lal Das had reportedly been subjected to hate attacks by Islamists several times.

A 200-year-old Hindu temple in central Bangladesh’s Chandair area of ​​Garhpara Union in Manikganj District had been vandalized by unknown miscreants. According to a report dated 20th November from the local police station’s officer-in-charge Abdur Rouf, the information was confirmed. The report claims that Maa Kali & Padma vigrahas from the temple were discovered in desecrated condition alongside the road.

53,189 total views In the din of the Supreme Court verdict upholding 10%