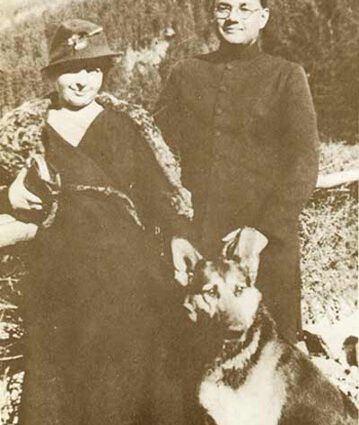 Love in the Time of War: A Story of Emilie Schenkl and Subhash Chandra Bose

After the failure of the Round table conference in 1931 and the resumption of the civil disobedience movement, Bose was arrested in January 1932. Due to terrible jail conditions, he became sick with TB and lost much weight. Even after one year of hospitalisation, he could not recover; the British govt allowed him to travel to Europe for treatment. He was granted a visa for France, Switzerland, Italy and Austria, but not for Germany or the United Kingdom.

In March 1933, he reached Venice through the ship and was welcomed royally by the Italian government, as Bose was already a big name in India. Gandhi and Tagore did not take his growing popularity happily. While the former refused outrightly to give any recommendation letter, Tagore gave it so half-heartedly that it was of no use.

The next day, Bose and his NRI nephew left for Vienna, then the world’s cultural capital. Along with recuperation, he started studying European political structures and administrative institutions. His health started improving and he stayed in Vienna for a full three years till 1936, save for two months in 1934-35. In 1934, a British publisher Wishart asked him to write a book on Indian politics. While writing it, he felt the need for someone who could take shorthand notes and type. Herein enters a pretty lady, Emilie Schenkl, who would steal Bose’s heart. She was an Austrian,13 years his junior on earth and belonged to a low class family. She indeed helped him in all matters from the heart to mind. His book, “The Indian Struggle” was published in London in 1935, but the British government banned the book in India lest it encourages unrest.

They soon fell in love and were married on 26 December 1937 in Badgastein during another visit by Bose in a secret Hindu ceremony, but without a Hindu priest, witnesses, or civil record. There was no record of marriage found to date and many even hazard a guess that theirs was a live-in relationship. With her companionship, his views on sex changed substantially, dramatically opposite to Gandhi’s. He began to believe that sex is a vital force and cannot be suppressed entirely. His close friends mentioned at various forums that she made him a more balanced human being.

Bose went back to India in 1937 when he was nominated for the post of president of Congress in absentia and had to rush back to India. Nehru was president for the past two years and Gandhi wanted a leftist person to continue. Gandhi did not like Bose, but he had no option but to choose Bose as no other person fit the bill. The Congress session at Haripura near Bardoli where he was elected was nothing but a royal durbar in which lakhs of rupees were spent. At the same time, Gandhi kept on indulging in his symbolic poverty by travelling third class and wearing only dhoti. Bose stood for unqualified Swaraj, including using force against the British, raising the hackles of both Nehru and Gandhi. In 1939, Bose was again elected president over Gandhi’s preferred candidate Pattabhi Sitaramayya. Even after winning by a comfortable majority, Gandhi forced Bose to resign, with Nehru supporting the former, as usual. So much for democracy by the duo. Gandhi’s numerous fasts, silences and penances made him a Shahanshah whose word was cast in stone. Author Sunil Khilnani once said:

These were the immensely effective techniques of an eccentric parent, but they were not designed to nourish commitment to democratic institutions.

Through all these tumultuous years, the couple, Bose and Schenkl, did not forget each other and kept on exchanging ideas, mostly mushy, through the letters, as Bose was aware that his letters were not confidential. He missed her sorely and wrote as many as 162 letters from 1934 to 1942, and have been published in Bose’s “Collected Works”. There might be more, as the British confiscated many of them.

In one letter, he professed his undying love for her:

You are the first woman I have loved, God grant that you may also be the last.

In another one, he became a teenage boy and stressed his macho-ness when he told her that he was exclusive to her even though many girls were in the pipeline.

I never thought before a woman’s love could ensnare me. So many did love me before, but I never looked at them. But you, naughty woman, have caught me.

In 1937, in a particularly forlorn moment, he wrote to her:

I have been longing to write to you for some time past — but you can easily understand how difficult it was to write to you about my feelings……Not a single day passes that I do not think of you. You are with me all the time. I cannot possibly think of anybody else in this world. I am anxious to know about your thoughts. Please write to me…

However, once he did discuss the Indian political scene with her:

I have not lost anything by resigning. As a matter of fact I have become more popular now… India is a strange land where people are loved not because they have power but because they give up power. For instance at Lahore, I had a warmer reception this time than when I went last year as Congress President.

In 1939, he almost firmed up the plan to visit her in Europe, but Hitler put cold water on his dream when his tanks rolled into Poland to start the second world war. Till 1941, there was no communication between the two.

Sometime in 1940, Bose protested for the removal of the “Holwell Monument,” built for the British victims of the event of the Black Hole of Calcutta. He was arrested, but after the hunger strike, he was released but kept under tight surveillance by CID. Here started the century’s most famous escape, traveling through the breadth of the country and then crossing various countries and reaching Europe. While in his home, he grew a beard and dressed as Pathan and escaped from his house and boarded the train from Gomah, Jharkhand to Peshawar. Meanwhile, the British were searching for him frantically. Since Bose did not know the Pashto language, he pretended to be deaf and dumb and escaped to Afghanistan by road. He had to change his disguise quite often to be a step ahead of the British. He became Ziauddin, a Pashtun insurance agent, in Afghanistan and reached the Russian-Afghanistan border. There Bose changed his guise again and travelled to Moscow on the Italian passport of Count Orlando Mazzotta. In Moscow, he did not get a positive response and left for Berlin.

This trip had always evoked wonders among the academic and political circles. Why did Bose take such enormous risks to go to Germany? Was this tortuous journey taken for Bharat Mata or his beloved? Or both?

He only wrote to her in 1941 when he reached Berlin, in which he beckoned her to come to Berlin and stay with him. She was still working as a stenographer in Vienna. When the bond of love was so strong, how could she say no? She soon joined him and produced a daughter, Anita, in November 1942. All along, the relationship was kept concealed from the prying eyes of the public, especially in India. However, it was apparent to Bose that his time was being wasted in Germany and he had nothing to show anything concrete. Being of low class, Emilie was treated suspiciously by Nazis and was insulted repeatedly. However, they somehow did bear her as they were sympathetic to Bose and India’s cause. During the stay, he also met Hitler for canvassing for India. He did register his protests about the passages considered demeaning to Indians in Mein Kampf.

When Hitler attacked Russia, Bose knew that there was no more time to waste and he escaped through a U2 submarine to Southeast Asia in February 1943, leaving Schenkl and their baby daughter forever. With Japanese support, he formed a Provisional Government of Free India and built the ‘Indian National Army’ (INA), which aimed to gain India’s independence militarily.

In 1945, he allegedly died, just aged 48, in a plane crash while taking off from Taiwan.

Like other freedom fighters, Bose’s family was also treated shabbily by the Nehru government. Bose’s contributions have been neglected, becoming just a footnote in Indian history. Clement Attlee, the then British prime minister, cited INA activities and the Royal Indian Navy revolt for the British exit from India.

During their seven years and eight months of marriage, Schenkl and Bose spent less than three years together, putting her under severe emotional strain. Afterwards, she kept on working in the trunk exchange in Vienna to keep her body and soul together. His brother Sarat Chandra Bose once did meet her in Austria in 1948. Emilie never remarried and died in 1996. Their daughter Anita Bose Pfaff – proud of her Indian lineage – is an economist and visited India in 2013.

Source: Sarmila Bose, Love in the Time of War: Subhas Chandra Bose’s Journeys to Nazi Germany (1941) and towards the Soviet Union (1945)

Chandrachur Ghose, Bose: The Untold Story Of An Inconvenient Nationalist

Leonard Gordon, Brothers against the Raj

53,161 total views In the din of the Supreme Court verdict upholding 10%