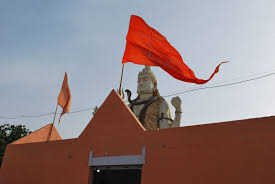 By: SatyaV
In: Culture
Tagged: Amrit Mahotsav, India at 75

India: 75 years of independence is commendable, but is Bharat really independent?  This question is something every Bharatiya should ask him/herself as they celebrate freedom this year.

First, are we decolonized yet?  It has been 75 years and there is no real excuse to blame every single negative thing on the Mughals or the Brits but seriously, are we truly decolonized?  Why would the powers that be in the Government of India (GoI) term the festivities “Azadi ka Amritmahotsav?’ The term ‘azadi’ is as foreign to us as the Mughals and some might claim that Urdu is indeed an Indic language, using the Urdu term ‘azadi’ is an utter shame to celebrate 75 years of freedom.  Wasn’t there any bureaucrat babu with half a brain to question the term and instead, suggest the Sanskrit term ‘swatantrata?’  How did GoI make such a huge debacle?  Does the Emperor have no clothes?
The Pathway to Extinction via the Flag
Moving on to more serious issues, while the ‘Ghar Ghar triranga’ campaign seems brilliant on paper, dhimmi Hindus have begun to wrap Devi-Devatas in the secular tricolor.  Saffron/Bhagwa flags indicate Dharma is being replaced with the flag which represents a false sense of unity among Dharmics and Adharmics, or Abrahamics.  This is the biggest disservice done to Bharat, by Bharatiyas.  Even worse are the fake sab mazhab ek hei crap where Bharat Mata is shown in secular triranga saree and school children are brainwashed to give an utterly false depiction of Bharat Mata performing adharmic namaz.  We as Bharatiyas are doing major karmic faux pas to the next generation of folks by inculcating adharmic values in them from a young age.
Mandirs are sporting the secular, Indian flag and even decorating Vigrahas and Shiva Lingams with the hideous Ganga-Jamuna tehzib tricolor.  It is extremely shameful to replace saffron with anything else.  In this case, the Communists and Jihadis as well as the missionaries are supporting the triranga initiative as it denotes the first successful step toward erasing Hindu identity and adopting some weird, inequality-laced national identity.
One needs to introspect and understand that the freedom to wave the triranga or the bhagwa exists because Bharat has valued pluralism and democratic values.  While it is perfectly okay to take pride in the flag, the flag needs to be understood for what it is, and should not be used to cloud dharma.  This means, the triranga is not a good replacement for the saffron dhwaj and therefore should not be used interchangeably.
Introspection
Temples are still under government control and the temple wealth collected from Hindu devotees often gets distributed for adharmic initiatives.  So isn’t it logical to wave the saffron flag over institutions, mandirs, and private balconies?
Introspection begins at home; kindly think, educate your family, and have open discussions with pujaris and priests and save our Hindu Devi-Devatas from the hideous secular outfits in the name of national pride.
SatyaV
Latest posts by SatyaV (see all)
2022-08-15
Previous Post: Love in the Time of War: A Story of Emilie Schenkl and Subhash Chandra Bose
Next Post: THE BREAKDOWN PLAN

58,151 total views In the din of the Supreme Court verdict upholding 10%