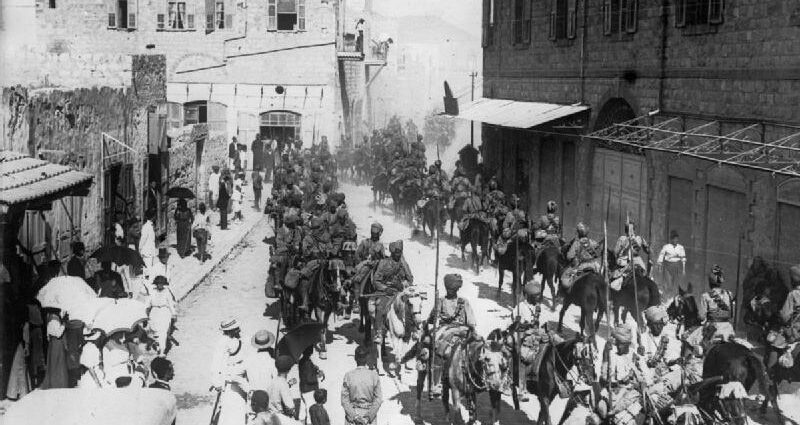 One of the finest cavalry attacks in modern military history occurred on September 23, 1918, when Indian and British forces conquered the Israeli city of Haifa from the Ottoman Army. The Battle of Haifa was one of several in the Sinai and Palestine Campaigns to take the critical Suez Canal during World War I. Because of its rail connectivity and Red Sea port, Haifa was a nearby strategic supply depot. To defeat the Ottoman Army and free a vital port town, the British 15th Imperial Service Cavalry Brigade was pressed into the attack two months before World War I ended. The Great War, as it was called then, was described as “the war to end all wars”. However, at that time, nobody knew that there would be another world war, way more bloody, way more brutal.

British General Allenby was left to combat Ottoman and German troops with the combined strength of the Sherwood Forester Yeomanry and two Indian cavalry brigades: the Jodhpur Lancers and the Mysore Lancers, while his tanks had earlier been transported to France to fight on the Western Front. The armies of Mysore and Hyderabad were in reserve, and the Jodhpur Lancers spearheaded the charge.

The Austrian gun placements and artillery on the upper slopes of Mount Carmel were well-defended, but a brave cavalry charge by the Jodhpur Lancers, even under heavy machine gun fire, was able to capture 30 prisoners, as well as two machine guns and two camel guns. It opened up a hitherto inaccessible route into Haifa, where they were able to surprise the defenders once more by continuing their charge, helped amply by the Mysore Lancers. Machine gun shots repeatedly failed to halt the rushing horses, even though several died due to their injuries. On this day, for the first and only time in history, a cavalry charge by the Jodhpur Lancers with lancers and swords destroyed the reinforced Turkish lines.

Captain Aman Singh Jodha and Major Dalpat Singh Shekhawat of the Jodhpur lancers played a critical part in the fight that ended in the utter devastation of the Turks, resulting in the Ottoman Empire’s downfall. Major Dalpat of the Jodhpur Lancers was martyred at the Battle of Haifa, bringing an end to nearly 400 years of Turkish sovereignty over Israeli territory. When Major Dalpat was injured by enemy fire, Captain Aman Singh Rathore took the reins, rallied the troops and recaptured Haifa. The Jodhpur Lancers conducted a frontal assault with just swords and lances against a Turkish stronghold defended with machine guns and artillery. Together, 1,350 captives from German and Ottoman forces were seized, assuring the safety of the inhabitants and ‘Abdu’l-Baha,’ the Bahá’ faith’s then-leader.

“No more extraordinary cavalry fight of its size was fought in the entire course of the war,” the Official History of the War noted, correctly summarising the Indian forces’ tenacity. The Battle of Haifa not only left the Turks stinging, but it also broke their Army’s spirit, and their retreat became a rout, resulting in the Armistice being signed not only by the Turks, but also by Germany. In that way, India contributed heftily to the British victory. Field-Marshal Sir Claude Auchinleck, Commander-in-Chief of the Indian Army from 1942, asserted that the British couldn’t have come through both World War I and II if they hadn’t had the Indian Army.

The British Indian Army defeated the Central powers of the German, Austro-Hungarian, and Ottoman Empires. But does anybody ever discuss the cost of all these battles? Over one million Indian troops served overseas in hostile, unknown terrain, with 74,187 dying and another 67,000 injured to assure the Allies’ triumph over the Central Powers. The country also supplied 170,000 animals, 3,7 million tonnes of supplies, jute for sandbags, and a large loan (the equivalent of about £2 billion today) to the British government. It amounted to the unlimited plunder of an already impoverished society. The fact that no one recalls the Indian troops’ enormous sacrifice adds insult to the injury. It has become necessary to remind the United States and the United Kingdom of such sacrifices.

India was raging with recurrent famines with attendant influenza and cholera diseases before the War. The British diabolically responded with high taxation to meet their burgeoning demand for men, money and material for their war needs. It was ironic that the nation that never attacked any country, barring a few cases here and there, was forced to attack and fight wars that were not even theirs. The Indian Army ended up dispatching seven expeditionary forces overseas in various theatres of World War I.

Another significant outcome of the battle was that many people becoming aware of the Indians’ valour forced the British government to break down racial barriers, paving the way for the grant of Kings Commissions as officers to Indians, which had previously been refused on the grounds that Indians lacked the leadership qualities to become good officers. The Prince of Wales Royal Indian Military College was also established in 1922 to train appropriate individuals for admission to the Royal Military College, Sandhurst.

The most crushing part of World War was that India was denied its promised self-government rule after Britain triumphed in the Great War. Instead, the British enforced the draconian Rowlatt Act, which gave the Viceroy’s authority enormous powers to combat “sedition” against the Empire. During this time, Gandhi started his first India-wide non-cooperation movement against British rule in February 1919. Before nationalist activities were redoubled under the aegis of the Quit India Movement in 1942, there was an impending Second World War and severe opposition to losing more Indian lives for a little concrete result. The beginnings of Indian independence, thus, may be traced back to the events of World War I.

There was little recognition of the bravery of Indian soldiers in the War among the Indian masses and leaders. The British, on the other hand, went ahead and built the triumphal arch in 1931 known as India Gate in New Delhi to commemorate the War. Tens of movies have been made on Muslim kings, hundreds of books and thousands of articles have been written on them, but none on our brave Indian soldiers who died in the twin World Wars.

Such was the dance of death among the Indian soldiers in the War that by 1925, the Army had been reduced to 2 lakh soldiers, out of which 1.5 lakhs were Indians, a ratio of 2.5:1. Despite the rampant injustice, slavery and racism in the Army, there was no revolt shows the slavish mentality among the Hindu soldiers. Their guns always remained pointed towards Hindus. In any case, the British never had more than 5000 British officers and 50000 British soldiers at any point of time during their 200 years of rule over 20 crores of Indians.

At this juncture, it seems unimaginable that such few people could lord over the entire South Asian continent for more than two centuries. In the end, the British could rule and kill Indians only with the help of Indians.

You may buy my books at the following links: