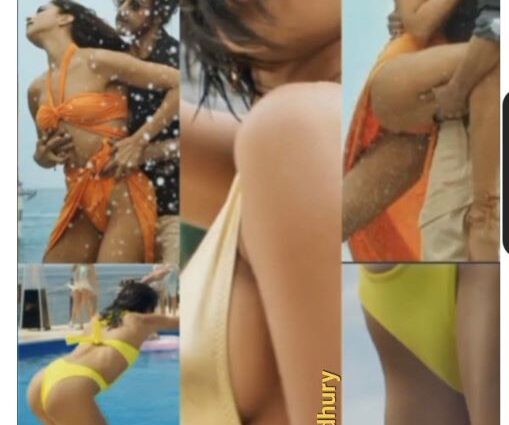 The trailer of Pathaan has been out for a while and some of the top Twitter trends are showing #BoycottPathaan for over a year.  The first soft-porn song is out, and this piece will discuss the obvious.

Besharam Rang which Deepika, the JNU Naxal darling has on is saffron.  Saffron is of course associated with the Hindus and all things sacred to them and the only ones who think of this colour in a negative light are Muslims and Christians and HINOs (Hindus In Name Only).  The subtle and not-so-subtle messaging shows Deepika hot and ready to give herself to SRK.  The background dancers are even more scantily clad than the main female lead and are seen in bedroom-type ecstatic poses while Deepika tries to do her ‘I’m in heat’ dance to woo the old mullah.

Priyanka Chopra wore a nude colour bathing suit in “Exotic” and also the high-waist black booty shorts in her video with Pitbull.  Deepika is pulling a gold swimsuit and is a decade too late to wear the same, black, high-waist bottoms in this video.  There is zero originality.

SRK looks old, and haggard and seems to have used the same leftover colour dye used by his co-actor. In fact, they both look like they’ve seen better days.  Someone, please offer them a sandwich – maybe they can split it and then throw it up to maintain their figure so that VFX won’t have to work too hard.

The ill-intended ‘salam’ is placed right where it should be, and Deepika readily accepts not just the disgusting male, Muslim, green gaze but also submits herself clad in orange to everything nasty this disgusting grooming cult represents.  Bollywood gutters have been overflowing with sex and womb jihad themes where the Hindu female always submits and accepts the jihadi males, erasing their identities and becoming part of the demonic cult.

The awful coming of old age film with Hrithik and Farhan also obsessed over everything Spanish and the songs were overkill.  SRK is too late to the game with his Spanish obsessions through words and phrases inserted in the Besharam song.  Indians in general see Abrahamic cultures such as Portuguese and Spanish to be mad cool while pooh-poohing on their own language and culture.  It’s supposedly cool to badly open a champagne bottle that depicts a male’s sexual release on Deepika’s back in the backdrop of some Spanish Isle while SRK disgustingly ogles her gyrating body. Deepika is quite clearly competing with her husband to see which one can get more naked. Wonder whether Deepika, her husband and the lot is upping the ante to ward away competition from original pornstars like Sunny Leone.

Bollywood’s paap ka ghada is full and the industry is experiencing flops after flops, thanks to the public’s jagruti on what the industry stands for.  Pathaan is already being declared as a super blockbuster by samosa critics though neither the aged SRK nor the once-used-to-be pretty long legs can save this stinker.

Kindly donate to Bharat Voice at https://rzp.io/l/5HCr6XZNU to support our work for Dharma.

53,157 total views In the din of the Supreme Court verdict upholding 10%