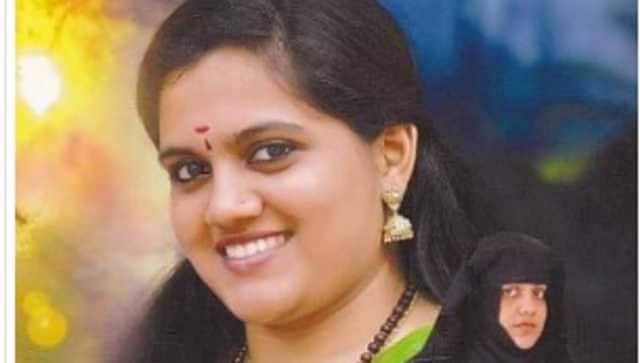 By: Arun Anand
In: Books

Nearly a decade ago, Kasargod in Kerala was in news with several reports of conversions of Hindus, especially girls, into Islam. One of those who got converted was a girl named Sruthi. Born into a Havyaka Brahmin family in Kasargod, Sruthi became Rahmat after getting converted to Islam. However, she eventually reconverted and came back to the fold of Hindu Dharma. How did this happen? This intriguing and thought-provoking journey has been penned in an autobiographical format by her. It is an important read as it provides a first-hand account of the well-oiled ‘Conversion Industry’ run by Islamists and Christian Missionaries in India.

This autobiography was originally written in Malayalam and was first published in 2018. The book has been hugely popular in Kerala but ironically, no one heard about it outside the state. Now with the English translation of this book coming out as ‘Story of A Reversion’, it can surely help in kicking off a debate on this issue in the larger national context.

There are a few things which come out of Sruthi’s journey that would keep you spellbound as a reader. First, there is a lack of systemic knowledge about Hindu Dharma in our homes as well as in educational institutions. This creates confusion in young minds. The missionaries and Islamists capitalise on this confusion pushing an individual who is seen as a ‘soft target’ to convert to Islam. Second, the Muslim co-workers and so-called Muslim friends work in a calibrated manner to create a deep impression on those minds who often face identity crises due to a lack of their own knowledge about their own ‘Hindu Dharma’.

Third, there is ample material in the form of text, audio-visual clips, books etc, to create a very favourable impression of Islam in vulnerable Hindu minds. Fourth, once a Hindu gets converted to Islam, the harsh realities hit her hard. Many Hindus who got converted to Islam under false pretenses or lack of understanding want to return to their original Dharma but they need a support system that is largely missing.

The first step towards initiation into Islam starts from the lack of understanding of one’s own Dharma as Sruthi points out, “Despite being born a Hindu, I had no commitment to my religion its faith, rituals or divine concepts. The only knowledge of history I had was what I had learnt at school…My Islamic friends taught me their history. They taught me Islamic philosophy (unilaterally). When I heard them discuss my religion, I was astonished at how well informed they were compared to me.”

Gradually Sruthi started developing a repulsion towards temples and Hindu rituals, courtesy propaganda material provided to her by her Muslim friends and co-workers. She used the internet to learn more about Islam and with web modules specifically designed to target such vulnerable minds and her Muslim friends and co-workers, she learnt to offer namaz.

Sruthi finally left her home in October 2013 and reached Malappuram where was formally converted into Islam in Maunathul Islam Sabha. She recalls, “A woman poured water thrice on my head. She asked me to repeat some Arabic verses after her. I accepted the name Rahmat. Thus, I lost the name given by my parents, Sruthi, which means Vedas.”

“I still shudder to think of many things that I saw after I became Muslim by reciting the Kalima. There were around 65 women who had come there for conversion. It included aged women, fully pregnant women, 16-17-year-old girls, and a woman with two daughters totaling 65,” she adds. Most of them had come to convert not due to genuine intent, they were either offered incentives or were being compelled by the Muslim husbands or boyfriends to convert to Islam.

When Sruthi was brought back, under a magisterial order, to Kasargod, she was told not to get influenced by those propagating Hindu Dharma. “When I stepped out of Maunathul Islam Sabha, they trained me: ‘They will use poojas and black magic, be unmoved. They will try to change your mind. Never allow (that). Never allow to tie any thread with black magic. Parents may pretend as if they are fainting. They might even get hospitalised. Come what may, stay firm.”

Finally, Sruthi landed, with the help of some Hindu activists at Aarsha Vidya Samajam (AVS) where she enrolled in a basic course of ‘Adhyatmik Shastram’ that provides systemic knowledge of Hindu Dharma. Interestingly, not only Sruthi came back to the fold of Hindu Dharma but she also became the first full time female worker of AVS, a social organisation working with a focus on bringing back those Hindus to the fold of tier original dharma who got converted to Islam or Christianity.

Apart from AVS, a number of other organisations and individuals are also working at the grassroots level to counter this menace of ‘Conversion of Hindus’ to Islam and Christianity. Sruthi has talked about them also in her account. The book is not merely a collection of events but I delve deeper into the issue of spirituality in Hindu Dharma and Islamic fundamentalism through a series of arguments and counter arguments between Rahmat and her Hindu guru.

This book is, surely, a compelling read, especially for the youth who are confused about Hindu Dharma.

(Story of a Reversion: How I Converted to Islam and Returned to Sanathana Dharma, by O Sruthi; Bouddhikam Books)

The reviewer, an author and columnist, has written several books. Views expressed are personal

Published earlier on 24 June 2022 in First Read | Story of reversion to Sanatan Dharma by a convert that could be a lesson for many (firstpost.com)

Arun Anand
Latest posts by Arun Anand (see all)
2022-06-27
Previous Post: Does India really need a Uniform Civil Code [at the moment?]
Next Post: Internationalization of Rupee – Challenges & Opportunities Ahead.

52,731 total views In the din of the Supreme Court verdict upholding 10%