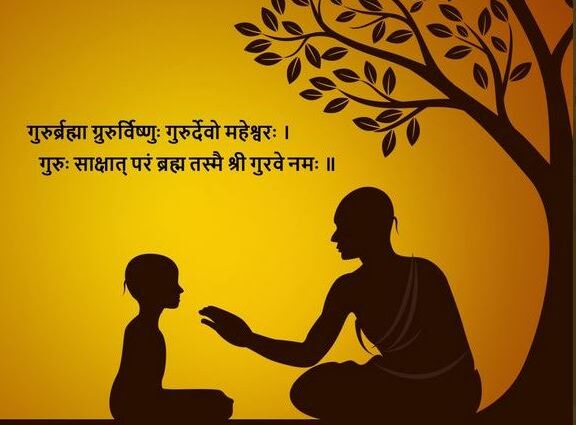 A Guru is Much More than a Teacher

The limited English language is causing confusion these days in how one perceives a teacher versus a guru.  The term ‘guru’ cannot be sufficiently translated as ‘teacher.’  A guru is much, much more than a teacher.

The term which comprises ‘gu’ and ‘ru’ usually means the dispeller of darkness.  This doesn’t mean that a sudden light bulb comes on for human beings, but it means that a guru is a possibility.  We often use terms interchangeably without pondering true meanings – adhyapak, shikshak, acharya, etc., and translate them all as ‘teacher’ in the English language.  However, let’s examine the nuances between ‘teacher’ and ‘guru’ and learn that these terms are not interchangeable.  Also, given this rationale, celebrating Teacher’s Day is not the same thing as celebrating Guru Pournami.

First, a teacher prepares one for a particular subject; s/he utilizes book knowledge and in religious circles, scriptures to educate students.  A teacher is someone who has the qualifications to teach based on their education, training, and experience.  A teacher mostly prepares students to pass exams and succeed in their academic lives.  A guru on the other hand has experiential knowledge and not just book knowledge.  A guru is not interested in teaching morality and rights and wrongs that one ought to practice in life.  A guru is that who cultivates the life force in us – and this transcends the academic life-span.  This means, a guru continues to hold one’s hand, so to speak, years after classes end.  A teacher might cultivate a human being, but a guru cultivates the life within us.

Second, teachers are physical entities.  We learn from teachers who have a physical existence – these teachers give lectures, assign homework, and grade our papers.  A guru does not necessarily have a physical presence.  S/he may exist as physical human beings, but this is not a requirement for one to be called a guru.  A guru is a possibility – a guru is a doorway through which we experience dimensions that are not physical in nature.  Given this distinction, the role of a teacher, albeit important, is limited to our physical and emotional existence, while the role of the guru transcends our physical and emotional states and allows us to perceive that which is beyond these dimensions.  This unknown or yet-to-be-perceived dimension is often called spirituality in eastern cultures and belief systems.

Finally, a teacher is usually associated with an institution and there is a give and take of money for the services provided.  Teachers often move from one job to another; change school districts, and take up positions at universities.  A guru however is less concerned with career advancement and is keener on cultivating us, making us more aware of our inner nature.  This is not to say that gurus reject money; there are plenty of examples in Hindu history where gurus have run ashrams and imparted educational and weapons training to students for fees.  However, the argument here is that gurus are concerned with developing a holistic individual rather than imparting education for the sake of a paycheck.

Teachers are extremely important, those who mentor students for years, write recommendation letters, and give guidance and support are special human beings.  However, a guru is much more than a teacher; a guru is someone who wants to see us progress; become more conscious and less compulsive.  Our intelligence and physicality only take us so far; a guru guides us beyond as human beings always yearn for something ‘more.’  Gurus have attained, and therefore they realize that humans need help on the inward, uncharted path.  A guru is also then a pathway, and also a device.

Guru Pournami is unique as it celebrates the first guru – the Adi Yogi.  It is believed that over fifteen thousand years ago, Adi Yogi had been sitting in silence for years on end and people began to gather around him, curious about his stillness.  Among these were the seven sages or Sapta Rishis – these Rishis were supremely dedicated and they sat near him, for years, waiting for him to teach them.  Adi Yogi, also known as Shiva, being convinced of their dedication agreed to teach these Rishis and take them on as his disciples.  This concept is what is celebrated as Guru Pournami.  Many Buddhas and gurus have attained enlightenment on Pournami, and this makes it a special type of celebration – it reminds humans that enlightenment or moksha is very much a possibility and all one has to do is truly seek.

Teachers must be celebrated – their dedication as educators is worth recognizing as they take on the role of a guide, a parent, and much more in the classroom.  However, it is unfair to equate teachers and gurus.  Gurus recognize that unless there is guidance, we, as seekers, will go around in circles as the path to inner awareness is uncharted.  The gurus have been there, done that, and they offer us a roadmap to transcend beyond the five outward senses and our physical existence.

SatyaV
Latest posts by SatyaV (see all)
2022-09-06
Previous Post: Karunanidhi Dynasty Tamil Cinema Sultanate
Next Post: WHY LAHORE SHOULD HAVE BEEN PART OF INDIA?

52,891 total views In the din of the Supreme Court verdict upholding 10%