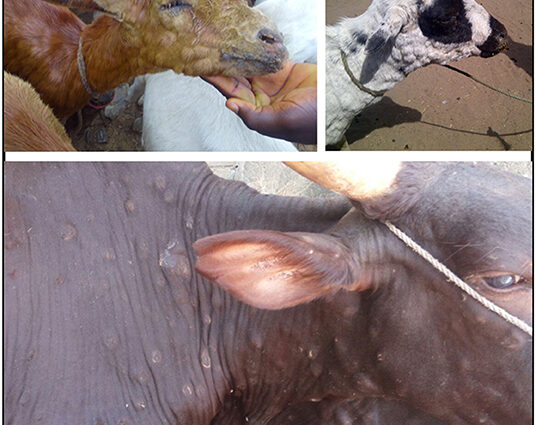 Is the Lumpy Skin Disease (LSD) a bioweapon unleashed on India?

Though there is no real evidence that a Na-Pak neighbor might be responsible for infecting thousands of cattle within India, the question surely does arise in one’s mind given the geography and pattern of spread.  The virus spreads by blood-feeding insects; therefore flies, mosquitos, ticks, and other arthropod vectors serve as transmitters.  According to the World Organization for Animal Health (WOAH), the Lumpy Skin Disease Virus is from the family – Poxviridae, genus Capripox virus, and the Capripox Viruses are considered among the most serious of all animal poxviruses.
LSD is a highly contagious viral infection and over 57,000 cattle have succumbed to the nasty virus and over 15 lakhs seem to be affected according to various news reports.  The infection is currently spreading across Punjab, Rajasthan, Gujarati, Uttar Pradesh, Delhi, and Haryana. The Rajasthan Chief Minister has written to the Central government to consider declaring LSD a national-level calamity.  Some states have halted the transport of livestock across districts.
Threat to Food and National Security?
Much is being discussed about food security and the import/export of certain foods such as wheat and rice these days.  As soils experience desertification around the globe, India is doing its best to combat climate change and thereby counter some of the issues caused by nutrition-depleted soil along with irregular rainfalls and drought conditions.  Food is the next big battle that is being covered in some media circles.  Just as humans are migrating in search of drinkable water, food scarcity is something that is staring us in the face and will most likely cause, even more, large-scale migrations around the globe.
Some conspiracy theorists had proposed arguments about certain strains of #ChineseVirus having affected a large number of Indians disproportionately.  Is it then possible that a similar strategy is being implemented against India to thwart the stability of agriculture and milk production via introducing emergencies to the food-chain supplies via the LSD virus?  Food security encompasses availability and access to foods, thereby causing issues in humans such as malnutrition and hunger.  It is important to get to the root of the cause of the LSD and trace ground zero in order to quickly formulate mitigation plans.
The Spread
According to WOAH, LSD is found in most African nations and has been spreading through the Middle East as well as Western and Central Asia.  Pakistan has witnessed over 29000 cases of LSD according to the Dawn publication.  Vaccines might be one solution to the problem but that solution cannot be implemented at the required speed in order to prevent inevitable deaths in infected cattle.
The only good news is that the LSD virus is not a zoonotic one – which means there is no danger of the virus spreading to humans from animals.  The LSD might be a biological weapon targeted to destroy one of the biggest Indian assets – gau mata and cattle.  Is it a coincidence that it is spreading rapidly, especially along border states and even in some INC-dominated states?  Attacks against India’s food basket cannot be ruled out and the greatest care and investigation need to take place in the matter.  There are more questions than answers for this one – hope the Central and State governments care enough to look deeper into the issue and act in the best interest of the Indian people.
SatyaV
Latest posts by SatyaV (see all)
2022-09-12
Previous Post: Wakf Board Claims Two Entire Villages with Temples, Temple Lands & Thousands of Acres Property Across Tamil Nadu. 
Next Post: Book Title: “Snakes in the Ganga” – An Unsophisticated Misnomer

52,807 total views In the din of the Supreme Court verdict upholding 10%