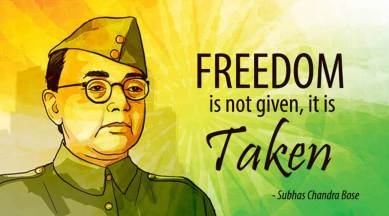 This year January 23rd marked the birth anniversary of one of India’s most vocal and defiant patriots: Netaji Subhas Chandra Bose.  What do we know about Netaji and why is his fight for India’s freedom relevant to contemporary political discourse?

Bose was born in 1897 in the Bengal Province and was one among fourteen children.  He received his early education within the European School system in India, where his teachers described him as being extremely bright.  Bose was influenced by the teachings of Ramkrishna and Vivekananda, which seemed to have ignited their love for his religion, country, and freedom.  He completed college in England but returned to India to take the Indian Civil Services exam.  He scored well but refused to work under the British-occupied government and instead actively embarked upon activities for Bharat’s independence.

Bose started the newspaper Swaraj (meaning self-governance) and began using it to help the Bengal Provincial Congress Committee fight for an independent Indian nation.  He traveled to Europe where he met his wife Emilie Schenkl and studied party organization in communist regimes in Europe.  Bose, in his efforts to free India, first reached out to Russia, Germany, and finally Japan, for help in Indian independence from colonialism.  Bose tried his best to take full advantage of British weakness during World War II and used the mechanisms and diplomatic relationships put in place by Indian revolutionaries during WWI to unite plantation workers and Indian prisoners of war, men and women who had fought under the British from all over South and Southeast Asia.  His partnership with Imperial Japan resulted in the formation of the Indian National Army (INA), an organization that employed democratic principles and promoted ethnic, religious, and gender-based diversity.

These freedom-fighting attributes are often confused with M.K. Gandhi, who perhaps doesn’t quite deserve to be called “Father of the Nation.” Gandhi had his ways and quirks, to be polite, but he was no match for Bose or many other freedom fighters and Gurus that India has witnessed over centuries. If not Bose, who else could be given the title? I’d like to argue that the Saptarishis – seven sages – who worked diligently to attain enlightenment and became karma yogis to spread dharma across the planet are the true fathers of the great Bharatvarsha.

Coming back to Netaji, one needs to learn about his role in making Indians non-Indians jagrut about the importance of swarajya and thus needs an appropriate title given the crucial part he has played in shaping modern India. Recently the Prime Minister of India was involved in unveiling a hologram statue of Netaji at the India Gate. Bose continues to inspire millions and his works need to be recognized and taught to Bharatiyas, especially the youth. Bose might as well be known as the true father of the modern Indian nation; he has earned it.

What do Indians, and especially Non-Resident Indians (NRI), learn from Netaji’s legacy?  Are NRIs like the INA, scattered across the world, waiting for someone like Netaji to help unite us for the sake of India?  Is unity even possible as it was in the times when India was ruled by Red-White-Green evil forces?  Do NRIs care about the Indian political discourse as our ancestors did when fighting for their country’s freedom?  These questions need serious pondering.

Netaji had many differences from his contemporaries – Gandhi and Nehru- yet he chose to rise above politics for the common goal: India.  Are NRIs concerned about the future of India and our brethren’s day-to-day struggles the same way as the patriots were before independence?  Other than packing our bags and moving to India, how can NRIs contribute to the cause that is India?  Those in the diaspora need to introspect on these pressing questions as the world is experiencing major upheaval, critical elections are occurring around the globe, and the results will shape a future that Bharatiyas too will inherit.

52,747 total views In the din of the Supreme Court verdict upholding 10%