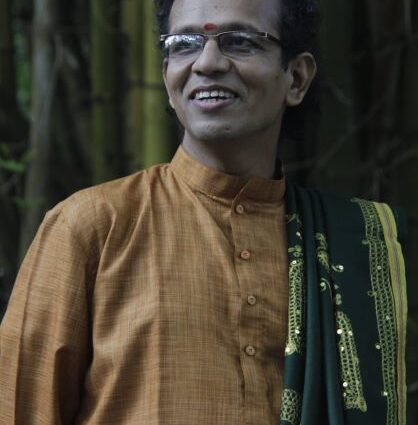 India, for a long time, has had an extraordinarily rich and deep-rooted scholarship in all domains. This has been passed down in an academically sensitized setup. Unfortunately, that class of scholarship is dwindling with generations passing by. Yet, we have a few exceptionally genuine scholars who have the scholarship in depth in the Bhartiya tradition. One such esteemed intellectual is Shatavadhani Dr. R Ganesh.

On his recent eventful completion of 60 years, it is a good occasion to visit the extraordinary scholarship he has pursued in the Indic knowledge systems.

Dr. Ganesh has managed to touch all the classes of society through his discourses, with an array of 10,000 hours’ worth of talks which have dealt with as varied topics as Spirituality, Veda, Vedanga, Darshana, Agama, Purana, Dharma Shastra, Artha shastra, Sahithya, Natya shastra, Itihasa and Kavya traditions of India. He has the uncanny ability to make his talks penetrative to the masses through a sharp intellect and critical analysis with anecdotes and the use of idioms and popular phrases.

According to Mr. Shashikiran, a young scholar who has closely been associated with Dr. Ganesh in literary pursuits, the most important contribution through his discourses has been the sensitization of the masses towards Bharatiya cultural, literary, and philosophical heritages.

Incidentally, Mr. Shashikiran has co-translated the book with Dr. R Ganesh, “Mahabrahmana” from Kannada to Sanskrit which has won the Kendra Sahithya Academy award for the year 2021.

The discourses – due to their depth and content, are used by candidates appearing for IAS and KAS examinations. The discourse content has stirred academic interest with further persuasion of dissertation works.

The task of mastering classical learning and articulating the same in the contemporary context to the public is an arduous task. Dr. Ganesh opines that classical learning is more specific compared to contemporary studies whose learning needs an entirely focused study on understanding the language, vocabulary, grammar, and idioms of that era.

The classical learning pursued by Dr. Ganesh for the last four decades has been extensively researched through individual works as well as the critical observations of contemporary Indian writers. The latter is necessary – according to Dr. Ganesh to widen the horizon, something missing in those pursuing master studies these days thus limiting their broader vision in this domain.

Dr. Ganesh pursued a master’s in mechanical engineering as well as Sanskrit. He is a polyglot well versed in both Indian and European languages and can construct poetry in eight different languages.

The one achievement of his which stands out is in his creative poetry. It is noteworthy that before his entry into the literary scene in the second half of the 20th century in Karnataka, there was not much interest in poetry composition using the chandas (meter).

Dr. Ganesh introduced the creative aspects of poetry both in Kannada and Sanskrit. The poetic aspects should not be anarchic or directionless but should be rooted and enriched in the Vedantic tradition of non-duality and rasadhvani. One should not violate the time-tested universal aspects of the tradition. Sustainability is possible only through critical conservatism, the rules he held firmly.

These exceptional creative poetic skills helped him to revive an ancient literary art form called Avadhana. The roots of this art form are found in Sanskrit and later by the 12th century, it got crystallized in Kannada. Kavi Kama was the first person to give a complete description of all eight aspects of Avadhana.

The art of Avadhana is an extemporaneous and spontaneous creative versification amidst distractions and disturbances. It needs multitasking, out-of-the-box thinking, and spontaneous wit with an educative and engaging conversation with the Pruchchakas, the persons posing questions. It has the three elements of creation, retention, and finally entertainment to head and heart.

His thesis titled “Kannadadalli Avadhanakale,” about the Avadhana art form was awarded the D. Litt degree from Hampi University. Subsequently, he has authored several books about the art of Avadhana. The work done in the field of Avadhana has inspired many youngsters to pursue the same and become an Avadhani. Shri Ganesh Bhat Koppalatota is one such youngster who got motivated and inspired by Dr. Ganesh to start performing the Avadhana. Shri Ganesh Bhat is one of the many who were part of “Padhyapana” a weekly meeting that Dr. Ganesh has been conducting for over a decade. The participants are trained to improvise the techniques of poetry using the right meter (Chandas) in real-time. The silent, unpublicised movement that started involving youngsters today has resulted in many of them performing Avadhana independently.

Alongside reviving the art of Avadhana, he has also contributed in a unique and original way to music, dance, and theatre. He has materialised a novel art form called kavya-chitra-Gita-Nrutya, an amalgamation of poetry, painting, music, and dance. He has performed with the legendary artist BKS Verma in a kavya–chitra dual show. Ganesh has conceptualized Ekavyakti-Yakshagana, a genre of solo classical dance having its roots in Yakshagana, a traditional theatrical art form of Karnataka. He has given a sound aesthetic framework to such aspects of the art as costumes, movements, themes, and music.

He has been guiding two to three generations of dancers performing Bharatanatyam, kathak, Kuchipudi in choreography, music, and dance directions. He has authored four hundred compositions for the nrutya-nataka.

To popularise Indian classical music, he conceptualised “Raganuraaga” a musical program through which 120 ragas are introduced.

Acknowledging his brilliant multifaceted contributions, numerous awards and recognitions have come his way. He was the youngest recipient of the Karnataka government’s Rajyothsava award and was bestowed the Maharshi Badarayana Vyasa Samman by the President of India in the year 2003. 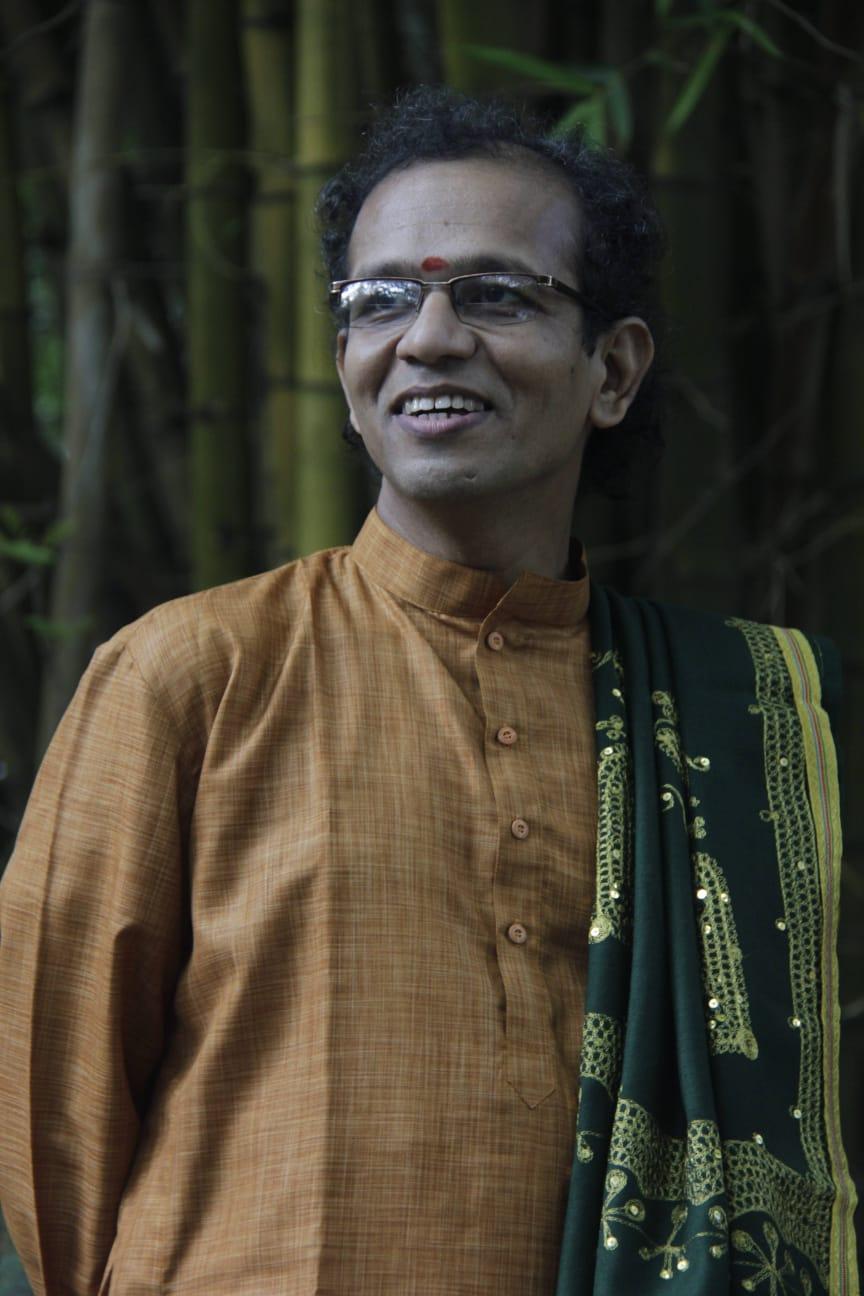 In editing an anthology of Dr. Ganesh’s Sanskrit works, Prof Balram Shukla, Professor of Sanskrit studies at Delhi University, himself an accomplished scholar and poet observes that Dr. Ganesh is one of the foremost poets of Sanskrit today. He has bridged the old and the new in Sanskrit in that he has effortlessly linked the millennia-old Sanskrit literature to the contemporary.

One hopes the ingenuity and creativity of Dr. Ganesh’s kind continue in the Indian diaspora. Expressing serious concerns about the lack of thoroughness and sparkling academic work in India, he cites the lack of honesty and interdisciplinary learning to be the reasons why there has been a decline in academic standards. This domain needs the best brains to extend the horizons of shastra to produce seminal work. It is not possible for governments to extend all the support; private initiatives should support the serious workers in this domain to make it attractive for more motivated and committed individuals to enter this area of expertise he opines.

Dr. Ganesh avers that it is extremely important to expose the children to the epics of Ramayana and Mahabharata and train teachers to rekindle the interest in our tradition to mould the next generation to carry forward our age-old culture. 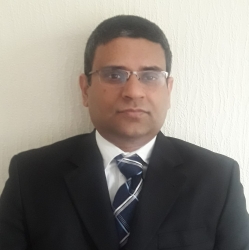 Dr. Praveen Kumar
Dr Praveen Kumar Kaudlay
Haemato oncology consultant based in the UK.
Writer interested in Bharatiya traditions and culture. A regular contributor to various national media for the past three decades.

53,051 total views In the din of the Supreme Court verdict upholding 10%