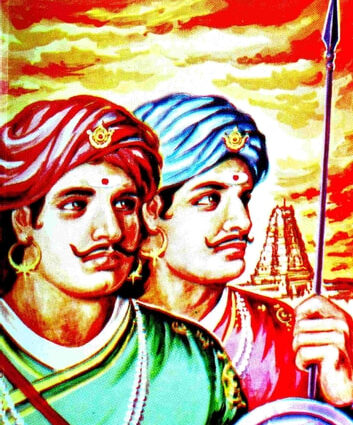 The Birth of the Vijayanagar Empire in South India

Tughlaq’s cousin Bahauddin was the governor of Sagar (south of Gulbarga, in present-day Karnataka), and somehow fell out of favour with Tughlaq. Consequently, Bahauddin had to run away and take shelter in Anegundi (Hampi). Contrary to common sense, he was treated with the utmost respect, given the status of a royal guest and pampered a lot by Kampila. However, the news of his wayward cousin getting a cosy shelter in some nondescript kingdom angered the sultan, and he decided to teach a hard lesson to the kingdom. Soon his forces under the command of Malik Zada swooped upon the harmless domain and laid a siege on their fort. They only sought Bahauddin and promised to return to Delhi. However, Kampiladeva refused their request on the pretext of Bahauddin being his guest. The false notions of Dharamyuddha were again at play, and like other Hindu kings, Kampila, too, did not know how to solve the predicament of honour. For this abstract ideal, he was ready to put himself, his women, and even his entire kingdom at stake.

Siege continued for many days, and soon food stored in the fort began to dwindle. Seeing the gravity of the situation, Kampila finally had to request his guest to run away by jumping over the rear wall. Soon after, he had to open the gates to fight the Islamic army. Kampila’s army was routed in a matter of hours, forcing his womenfolk to commit Jauhar. Kampiladeva’s head was severed instantly in true Islamic tradition and displayed on the fort wall for days. Some say he was skinned alive, put in a giant catapult and fired. In the melee, however, the brothers Harihar and Bukka managed to flee and took shelter in nearby forests. The sons of Kampiladeva were arrested and enslaved and Tughlaq brought them to Delhi. He pardoned them only when they acquiesced to convert to Islam.

After running away from Anegundi, Bahauddin sought shelter from the neighbouring Hoysala king Veera Ballala III. Displaying realpolitik, he promptly imprisoned the refugee and handed him over to Zada. The latter took Bahauddin to Delhi, where he was skinned alive like his benefactor Kampila and his body was stuffed with straw and displayed prominently in Delhi. Such was Tughlaq’s love for the macabre violence that he got Bahauddin’s flesh cooked with rice and sent it to his wife and children, who were forced to eat it.

Though Kampila met a brutal end, he managed to light a spark among the Hindus. Harihar, Bukka and their brothers managed a comeback and sought to establish a kingdom that would act as a bulwark against Islamic rule since they had witnessed the gory violence and savagery of the Islamic army from close quarters. At Hampi, they happened to meet a rishi named Vidyaranya of Shringeri doing tapasya, who told them about the holy place of Hampi, which belonged to various gods and goddesses.

They then narrated the rishi about an unusual sight they saw during a hunting mission. A deer chased by a fox suddenly turned courageous and started chasing back the predator.

Vidyaranya told them that Hampi was special and appropriate for their capital. Like a true rishi, he also used his influence to secure critical financial support for the brothers in the initial period of the Empire.

The seed of a mighty empire was thus sown. It would protect Southern India from Islamic invasions for three centuries.

53,131 total views In the din of the Supreme Court verdict upholding 10%