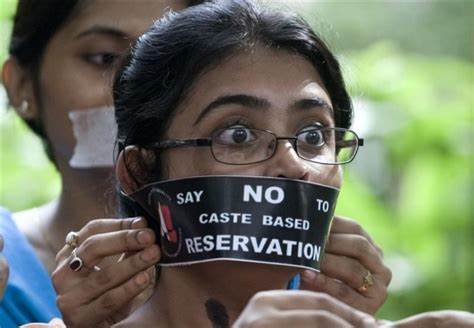 No End To Quota Raj?

By: BV Editor
In: Editorial
Tagged: Caste Based Reservation, Reservation in Medical Education

With the Supreme Court approving the BJP central government’s move to introduce reservations of 27% for OBC and 10% for Economically Weaker Section (EWS) in MBBS and MD courses under the All India Quota (AIQ) seats, there seems to be no end to the quota regime plaguing India’s educational system.

Having nearly 60% seats reserved for all streams of education other than medicine was bad enough, now the same reservation system is extended to critical Medical streams also. Reservations are undesirable as such, because they create fissures in the Hindu society reinforcing the otherness and widening the chasms between different castes. But what is worse is having unprecedented reservations in the critical Medical field at MBBS and MD super-speciality levels which compromises merit.

Medical stream is one field where merit just cannot be afforded to be compromised as it puts patients’ lives at tremendous risks. It is pertinent to note that the political class do not have much faith in getting themselves treated for any serious ailment in Indian government hospitals and largely prefer to get treated at state expense abroad in the UK, US or Germany etc. So, while the political class insists that increasing reservations in the medical stream does not imply compromise in merit, they do not practice what they preach when it comes to their health safety.

Notably, the CPI(M) Kerala Chief Minister, Pinarayi Vijayan is slated to go for a two-week long medical treatment to the US paid by the state exchequer. So, while ordinary citizens would have to hazard their lives getting treated by incompetent products of the quota system in government hospitals, the actual political class which introduces such damaging schemes for votebank politics get themselves treated by the best of Doctors in western countries which have no reservation system.

This apart, it is a widely acknowledged fact that many crypto-Christians continue to identify themselves as Hindus to illegally benefit from the reservation policy. The tendency of increasing reservations in education and employment for appeasing votebanks across all political parties since independence has resulted in a competition among various castes to claim to be more backward than the other for more and more reservations. Tamil Nadu tops the list by having 69% reservation (79% total reservation including the 10% EWS quota) for education and government employment. It has come to such a pass that the scarcely available MD seats in many cases are all allotted to quota students scoring much lower than the General candidates and there is not even a single seat available for a General candidate on merit.

The reservation policy is one of the prime reasons for fragmentation of Hindu society which is exploited by political parties to divide Hindus along caste lines and has resulted in virtual braindrain from India to western countries.

BR Ambedkar, while drafting the Constitution of India had originally conceived reservation for political representation only to last for the first 20 years after independence, but has been continuing even 73 later. Reservation for education was not even conceived originally by the Constitution. It was brought in by the First Amendment to the Constitution of India in 1951 by the Nehru government by inserting clause (4) in Article 15 to nullify the decision in State of Madras Vs. Champakam (1951 SC 226). This opened the Pandora box of Quota Raj continuously scarring Hindu society, affecting its unity and prosperity.

Reservations meant as representation of the marginalised sections of society has become an extortion. So the question looming large is, though the British Raj ended formally in 1947 when is its ghost of divide and rule policy through Quota Raj going to end?

52,713 total views In the din of the Supreme Court verdict upholding 10%