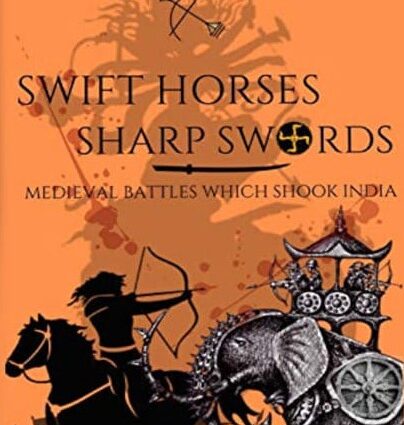 By: Munishwar Gulati
In: Books

A well-researched book on Indian medieval history titled “Swift Horses Sharp swords: Medieval Battles which Shook India” is penned by Mr. Amit Agarwal, an engineer from IIT- Roorkee. Currently, he is working as a General Manager in a prestigious Maharatna oil PSU and is an avid marathoner & mountaineer as well. It is his first book on a subject he is passionate about.

Amit Agrawal comes from this new crop of writers who have been reading and absorbing knowledge for quite many years. His book is an outpouring of years of learning and imbibing history from western as well as Indian historians. He didn’t depend only on historians like R.C. Majumdar and Jadunath Sarkar, who have been banished from university shelves in India or considered ‘communal’ now. This book was not just a linear view of history but an integrated look at history with sociological, scientific, and strategic observations. It is an unconventional way of narrating history and happily so. It relates the historical events with contemporary knowledge of game theory, chaos, scatter/randomness, network theory, bell & sinusoidal curves and Maslow pyramids, etc., and their correlation and causation is a crucial takeaway for this unique version of history. It pulsates with life. For a first-time writer to come up with such a book is commendable.

As the author mentioned in the preface that most of the history books he has come across, were written in a left-liberal narrative which, more often than not, failed to depict an accurate picture of Indian history. Hence, he was driven to author such a book that aptly described events from a Hindu perspective in an engaging manner. Indian history has been intentionally depicted with its fulcrum on the Arabs, Turks and Mughals in the medieval period. Incidentally, this has become a very controversial topic of late as the people are demanding the modification in NCERT history books to correct the glorification of the invaders. It was always portrayed that the invasions were a cakewalk for them, but the book reveals in no uncertain terms that warriors of that time were not easy prey.

It traverses the historical time zone from the 7th to the 13th century and examines the conditions encompassing the social, economic, religious, technological, and geographical factors and their interplay. The book has a microscopic analysis of history without overlooking the larger view. It also does a SWOT analysis of the Indian ecosystem and does not shy from pointing out the mistakes committed by the Indians. Consequently, we now have an outstanding historical compilation of intense bravery, hardly remembered and frugally told before.

The book also has an unusual chapter describing that homogeneous societies excel on most parameters. The inverse relationship between ethnic diversity and economic and social progress is clearly established in the book. Hence, all the advanced and wealthy countries like Japan, China, European nations and the USA, to some extent, are homogenous, while the heterogeneous countries, including India, remain slackers. This theory has suitably been strengthened with the authentic tabulated data. It has also tried to prove why our progress has been lukewarm even after independence. It also examines why, at the same time, our religion and culture is still intact despite such horrific onslaught over the centuries.

The book has three distinct parts. The first part deals with ancient India and its glory. It also has chapters on the rise of Hinduism and Buddhism and how India had tremendous influence over the Silk Road and South-East Asia. A chapter was devoted to the history of Swastika and Aryan migration theory. He could have elaborated more on Aryan theories as they are such controversial topics nowadays. Maybe the book is about the medieval era, so the author might not have wanted to devote more space to the issue.

The second part deals with Islamic invaders and why Indian kings and warriors were defeated despite their bravery. These factors and underlying conditions are examined in detail. The third part primarily deals with the overall analysis and exciting anecdotes. One chapter delineates the penchant of Islamic invaders to create pyramids of human heads with horrific details.

Further, how polytheistic societies recognize other gods without malice and why the concept of Karma is built in every such society is thoroughly explored. It also tries to discover why all polytheistic communities are paragons of tolerance.

The book also mentions the lack of technological prowess of Indian warriors. It brings out the aspect of technology by which sturdy Chainmail armour, solid tree saddle and metallic stirrup were designed and developed in Central Asia. Due to this, Turks could accurately fire six arrows per minute while galloping on the horse. Few other eye-opening facts of Turks travelling 100 kilometres per day, which meant they could come to Delhi in a flat ten days from Ghazni in Afghanistan.

The book also brought out the follies committed by the Indian warriors in that period. Despite being super rich, innovation in military strategy, technology, and tactics could not keep pace with that of the Turks. The overemphasis on Dharamyuddha was another huge factor in the recurring defeats. To quote an example: Ghori was lying on the battlefield unconscious with injuries with Rajputs having all the time to kill him. Yet they did not find it morally right to kill an injured and unarmed warrior. Consequently, His soldiers managed to take him back to Ghazni. He then practiced with the dummy mud elephants as the Indian elephants were his chief nemesis in the battle. Within a year, Ghori and his soldiers came back to rule over India for centuries.

The book’s key takeaway is to make the current Indian generation proud of their brave ancestors. The latter lost primarily because of their lack of unity and other myriad reasons and undoubtedly not due to any cowardice which resulted in the Turkish conquest of India. There were numerous instances when invaders were defeated squarely by our kings, however, these warriors are largely missing from the NCERT textbooks, which only tried to portray Hindus as a bunch of losers.

The book correctly bemoans the fact that many of the cities and stations in India are named after the brutal invaders. To quote an example from the book: the Railway station of Nalanda is called Bakhtiyarpur after Bakhtiyar Khilji, who burnt the university and left it in ruins. Any attempt to change such names usually results in vociferous protests by secular Hindus first. The opposition to renaming Ahmedabad can be seen as an appropriate example of this malaise.

The author has given a few references to the battles in Europe and elaborated that Europeans were able to defeat Arabs squarely with little ingenuity. There is also a mention of the Greco-Persian war of 5th century BCE, where Spartans could check the Persian invasion for days with only 300 soldiers. The author wished our warriors, too, could limit the invaders at narrow Khyber Pass.

The book is a study written in simple English fathomable to all Indians. It is crisp, concise, fast-paced and targeted towards those who know little about this dreadful chapter of Indian history but want to know the complete record in a nutshell. It is also littered with intriguing historical anecdotes, making it a light read.

Overall, the book has the potential to make the Hindus proud of their roots, traditions and culture and if it could convert a few seculars into Sanatani, it would be a massive success for the book!

Swift Horses Sharp Swords, in both Hindi and English, is available on Amazon and Flipkart.

The reviewer, an alumnus of IIT-Roorkee, is an engineering and law graduate with about 30 years of information technology experience. He is a Founder Director of a couple of IT firms. He has written and published over 150 books on Information Technology since 1992. He is currently writing on the present and future technology and Cyberlaw.

58,161 total views In the din of the Supreme Court verdict upholding 10%