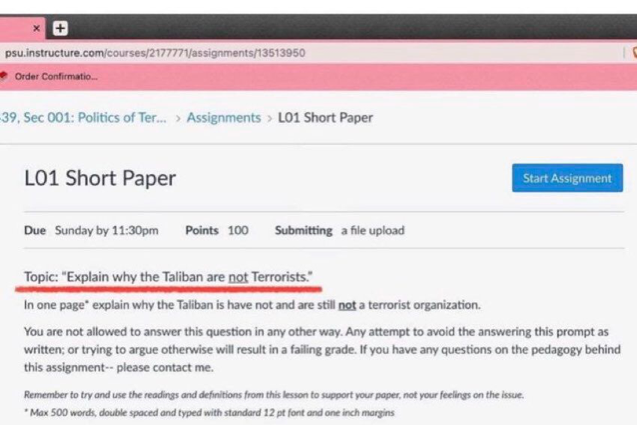 Destruction of Academia via Communist-Jihadist-Woke Forces

Academia around the world has been co-opted by various forces.  These forces include planned attempts by Marxists to subvert nations by consistently funding institutions and academics to brainwash generations of people in order to generate a soft spot for communist principles.  Similarly, jihadists have also occupied a certain degree of academia by funding Islamic studies, Sufism as a religion and various Middle Eastern studies institutes or programs in higher education.  This undermining of a native country’s academic institutions is most evident in an emerging country such as India where institutions such as JNU, Jadavpur University, AMU, etc., are all hotbeds of dissent, and the students are turned anti-status quo, anti-government, and trained to be anarchists.
This phenomena is not new; everything from school textbooks, to the type of teachers hired at elementary and middle schools as well as high schools serve as examples of pro Marxist education.  Alongside the consistent years of brainwashing, another new-ish trend is to package both Marxist-Communist-Jihadist ideologies under the guise of “diversity and inclusion,” threby giving birth to a love child popularly known as “woke” ideology.  Woke ideology is anything but equality or justice that it pretends to tout on college campuses.  This ideology is evident in textbooks; chapters which openly address ineptness of democratic norms and sow the seeds of protest, activism and deliberate ‘othering’ of those who disagree with you.  Meaning, equality for ME, but not for you.  The cultivated oversensitive-ness from gender-neutral bathrooms to pronouns becomes part of a child’s socialization and cohorts of students are being currently trained to hate the society as well as themselves.  Essentially this new and dangerous woke ideology which has elements of both no-god but as well as one god.  In a world where the influence of Christianity is dwindling and more and more identify themselves as non-religious and/or atheist and/or spiritual, the overt and covert efforts to legitimize the religion of terror is underway in schools and colleges.
For example, colleges have been under investigation about not disclosing millions worth of foreign funding poured into institutions.  Harvard and Yale universities are just two examples.  China funding research at universities and various Islamic countries funding Islamic studies is a trend which has come to surface, yet, there is little that institutions or even the government in the U.S. has been able to curb the phenomena.  This type of foreign funding results in advancing of Islamic and Communist ideologies in the classrooms and is often a national security threat, especially in STEM – Science, Technology, Engineering and Mathematics areas.  A recent circular from a course on terrorism from Pennsylvania State University brought the pro-jihadist and pro-Taliban liberal academic sympathies to light.  Though not verified first hand, the paper seems to direct those students enrolled in a counter terrorism course program who are in the terrorism course to argue that the Taliban never was and still is not a terrorist entity.
Legitimizing terrorism and thereby Islamic jihad is a multi-pronged effort being carried out in the U.S. Congress as well, as evident by the introduction of the Islamophbia bill.  This bill is essentially an attempt to white-wash terrorist activities and create fear in those willing and still able to critize the jihadist parts of Islamic ideology.  Academic institutions have always had liberal leanings, though lately given the pandemic, the institutions seem to be suffering from many issues including funding and the money has to come from somewhere to sustain the top-heavy administrator salaries.
Universities are and will continue to fully sell out.  We might as well refer to certain universities as “University owned by China” or “Department funded by Qatar.”  Nations with devious agendas will continue to fund chairships and fellowships and fill these institutions with those who act as traitors against the nation they are situated in.  Students, not knowing any better, or perhaps even self-selecting will continue to be sympathetic to those interests which are detrimental to their own long-term existence.
The future of education, unless there is a major overhaul, seems rather grim.  Not ready to write the paper giving legitimacy to the Taliban?  Get ready to receive a failing grade and see your average scores drop.  Stand up for what is right and argue that the Taliban were and always will be a terrorist organization?  Get ready to be ridiculed and canceled by your ultra woke cohort and jihadi professor.  The best a student can do in this case is to leak the requirements of the paper and let others ridicule it while your identity remains anonymous.
This example is just a drop in the bucket, folks.  Open your eyes and pay attention to what type of commie-jihadist indoctrination is underway for your own kid(s).
SatyaVani
Latest posts by SatyaVani (see all)
2022-01-16
Previous Post: MUSLIM VOTES: KEYS TO THE CASTLE OF UP
Next Post: JIHAD – THE IDEOLOGUE: ABUL ALA MAWDUDI

52,849 total views In the din of the Supreme Court verdict upholding 10%